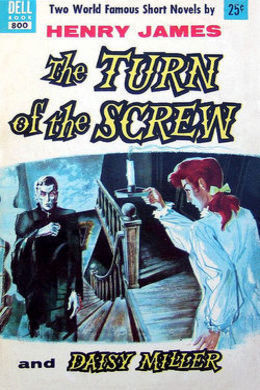 The Turn of the Screw

The story starts conventionally enough with friends sharing ghost stories ‘round the fire on Christmas Eve. One of the guests tells about a governess at a country house plagued by supernatural visitors. But in the hands of Henry James, the master of nuance, this little tale of terror is an exquisite gem of sexual and psychological ambiguity. Only the young governess can see the ghosts; only she suspects that the previous governess and her lover are controlling the two orphaned children (a girl and a boy) for some evil purpose. The household staff don’t know what she’s talking about, the children are evasive when questioned, and the master of the house (the children’s uncle) is absent. Why does the young girl claim not to see a perfectly visible woman standing on the far side of the lake? Are the children being deceptive, or is the governess being paranoid? By leaving the questions unanswered, The Turn of Screw generates spine-tingling anxiety in its mesmerized readers.

The story had held us, round the fire, sufficiently breathless, but except the obvious remark that it was gruesome, as, on Christmas Eve in an old house, a strange tale should essentially be, I remember no comment uttered till somebody happened to say that it was the only case he had met in which such a visitation had fallen on a child. The case, I may mention, was that of an apparition in just such an old house as had gathered us for the occasion–an appearance, of a dreadful kind, to a little boy sleeping in the room with his mother and waking her up in the terror of it; waking her not to dissipate his dread and soothe him to sleep again, but to encounter also, herself, before she had succeeded in doing so, the same sight that had shaken him. It was this observation that drew from Douglas–not immediately, but later in the evening–a reply that had the interesting consequence to which I call attention. Someone else told a story not particularly effective, which I saw he was not following. This I took for a sign that he had himself something to produce and that we should only have to wait. We waited in fact till two nights later; but that same evening, before we scattered, he brought out what was in his mind.

“I quite agree–in regard to Griffin’s ghost, or whatever it was–that its appearing first to the little boy, at so tender an age, adds a particular touch. But it’s not the first occurrence of its charming kind that I know to have involved a child. If the child gives the effect another turn of the screw, what do you say to two children–?”

“We say, of course,” somebody exclaimed, “that they give two turns! Also that we want to hear about them.”

I can see Douglas there before the fire, to which he had got up to present his back, looking down at his interlocutor with his hands in his pockets. “Nobody but me, till now, has ever heard. It’s quite too horrible.” This, naturally, was declared by several voices to give the thing the utmost price, and our friend, with quiet art, prepared his triumph by turning his eyes over the rest of us and going on: “It’s beyond everything. Nothing at all that I know touches it.”

“For sheer terror?” I remember asking.

He seemed to say it was not so simple as that; to be really at a loss how to qualify it. He passed his hand over his eyes, made a little wincing grimace. “For dreadful–dreadfulness!”

“Oh, how delicious!” cried one of the women.

He took no notice of her; he looked at me, but as if, instead of me, he saw what he spoke of. “For general uncanny ugliness and horror and pain.”

He turned round to the fire, gave a kick to a log, watched it an instant. Then as he faced us again: “I can’t begin. I shall have to send to town.” There was a unanimous groan at this, and much reproach; after which, in his preoccupied way, he explained. “The story’s written. It’s in a locked drawer–it has not been out for years. I could write to my man and enclose the key; he could send down the packet as he finds it.” It was to me in particular that he appeared to propound this–appeared almost to appeal for aid not to hesitate. He had broken a thickness of ice, the formation of many a winter; had had his reasons for a long silence. The others resented postponement, but it was just his scruples that charmed me. I adjured him to write by the first post and to agree with us for an early hearing; then I asked him if the experience in question had been his own. To this his answer was prompt. “Oh, thank God, no!”

“And is the record yours? You took the thing down?”

“Nothing but the impression. I took that here”–he tapped his heart. “I’ve never lost it.”

“Is in old, faded ink, and in the most beautiful hand.” He hung fire again. “A woman’s. She has been dead these twenty years. She sent me the pages in question before she died.” They were all listening now, and of course there was somebody to be arch, or at any rate to draw the inference. But if he put the inference by without a smile it was also without irritation. “She was a most charming person, but she was ten years older than I. She was my sister’s governess,” he quietly said. “She was the most agreeable woman I’ve ever known in her position; she would have been worthy of any whatever. It was long ago, and this episode was long before. I was at Trinity, and I found her at home on my coming down the second summer. I was much there that year–it was a beautiful one; and we had, in her off-hours, some strolls and talks in the garden–talks in which she struck me as awfully clever and nice. Oh yes; don’t grin: I liked her extremely and am glad to this day to think she liked me, too. If she hadn’t she wouldn’t have told me. She had never told anyone. It wasn’t simply that she said so, but that I knew she hadn’t. I was sure; I could see. You’ll easily judge why when you hear.”

“Because the thing had been such a scare?”