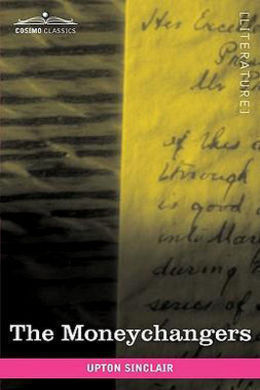 Here Upton Sinclair offers us a novel about the Wall Street panic of 1907. He tells of a financial disaster brought on deliberately by powerful capitalists intent upon the ruin of their rivals – fundamentally evil people who live to out-maneuver one another. We are a nation, said Sinclair, fundamentally corrupt – our government, our banks, our industries all seek personal ruin for its own sake…Sinclair tells an engaging tale; if you don’t know his work, you’d do well to take in and understand his paranoid vision…

“I am,” said Reggie Mann, “quite beside myself to meet this Lucy Dupree.”

“Who told you about her?” asked Allan Montague.

“Ollie’s been telling everybody about her,” said Reggie. “It sounds really wonderful. But I fear he must have exaggerated.”

“People seem to develop a tendency to exaggeration,” said Montague, “when they talk about Lucy.”

“I am in quite a state about her,” said Reggie.

Allan Montague looked at him and smiled. There were no visible signs of agitation about Reggie. He had come to take Alice to church, and he was exquisitely groomed and perfumed, and wore a wonderful scarlet orchid in his buttonhole. Montague, lounging back in a big leather chair and watching him, smiled to himself at the thought that Reggie regarded Lucy as a new kind of flower, with which he might parade down the Avenue and attract attention.

“Is she large or small?” asked Reggie.

“She is about your size,” said Montague,–which was very small indeed.

Alice entered at this moment in a new spring costume. Reggie sprang to his feet, and greeted her with his inevitable effusiveness.

“Judge Dupree’s plantation was next to ours,” said Montague. “We all grew up together.”

“There was hardly a day that I did not see her until she was married,” said Alice. “She was married at seventeen, you know–to a man much older than herself.”

“We have never seen her since that,” added the other. “She has lived in New Orleans.”

“And only twenty-two now,” exclaimed Reggie. “All the wisdom of a widow and the graces of an ingénue!” And he raised his hands with a gesture of admiration.

“Has she got money?” he asked.

“She had enough for New Orleans,” was the reply. “I don’t know about New York.”

He took Alice away to her devotions, leaving Montague to the memories which the mention of Lucy Dupree awakened.

Allan Montague had been in love with Lucy a half a dozen times in his life; it had begun when she was a babe in arms, and continued intermittently until her marriage. Lucy was a beauty of the creole type, with raven-black hair and gorgeous colouring; and Allan carried with him everywhere the face of joy, with the quick, mobile features across which tears and laughter chased like April showers across the sky.

Lucy was a tiny creature, as he had said, but she was a well-spring of abounding energy. She had been the life of a lonely household from the first hour, and all who came near her yielded to her spell. Allan remembered one occasion when he had entered the house and seen the grave and venerable chief justice of the State down upon his hands and knees, with Lucy on his back.

She was a born actress, everybody said. When she was no more than four, she would lie in bed when she should have been asleep, and tell herself tragic stories to make her weep. Before long she had discovered several chests full of the clothes which her mother had worn in the days when she was a belle of the old plantation society; and then Lucy would have tableaus and theatricals, and would astonish all beholders in the role of an Oriental princess or a Queen of the Night.

Her mother had died when she was very young, and she had grown up with only her father for a companion. Judge Dupree was one of the rich men of the neighbourhood, and he lavished everything upon his daughter; but people had said that Lucy would suffer for the lack of a woman’s care, and the prophecy had been tragically fulfilled. There had come a man, much older than herself, but with a glamour of romance about him; and the wonder of love had suddenly revealed itself to Lucy, and swept her away as no emotion had ever done before.

One day she disappeared, and Montague had never seen her again. He knew that she had gone to New Orleans to live, and he heard rumours that she was very unhappy, that her husband was a spendthrift and a rake. Scarcely a year after her marriage Montague heard the story of his death by an accident while driving.

He had heard no more until a short time after his coming to New York, when the home papers had reported the death of Judge Dupree. And then a week or so ago had come a letter from Lucy, to his brother, Oliver Montague, saying that she was coming to New York, perhaps to live permanently, and asking him to meet her and to engage accommodations for her in some hotel.

Montague wondered what she would be like when he saw her again. He wondered what five years of suffering and experience would have done for her; whether it would have weakened her enthusiasm and dried up her springs of joy. Lucy grown serious was something that was difficult for him to imagine.