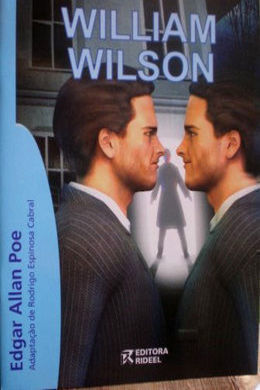 William Wilson tells the tale of a man who travels around the world pursued by his ghostly double who tries to keep him from sin and vice. This stands out among Edgar Allen Poe’s stories for the fact that it is less Gothic, less gruesome, and less melodramatic than most of his other work. You’ll find a different kind of storytelling here than you would in The Tell-Tale Heart or in The Fall of the House of Usher.

LET me call myself, for the present, William Wilson. The fair page now lying before me need not be sullied with my real appellation. This has been already too much an object for the scorn—for the horror—for the detestation of my race. To the uttermost regions of the globe have not the indignant winds bruited its unparalleled infamy? Oh, outcast of all outcasts most abandoned!—to the earth art thou not forever dead? to its honors, to its flowers, to its golden aspirations?—and a cloud, dense, dismal, and limitless, does it not hang eternally between thy hopes and heaven?

I would not, if I could, here or to–day, embody a record of my later years of unspeakable misery, and unpardonable crime. This epoch—these later years—took unto themselves a sudden elevation in turpitude, whose origin alone it is my present purpose to assign. Men usually grow base by degrees. From me, in an instant, all virtue dropped bodily as a mantle. From comparatively trivial wickedness I passed, with the stride of a giant, into more than the enormities of an Elah–Gabalus. What chance—what one event brought this evil thing to pass, bear with me while I relate. Death approaches; and the shadow which foreruns him has thrown a softening influence over my spirit. I long, in passing through the dim valley, for the sympathy—I had nearly said for the pity—of my fellow men. I would fain have them believe that I have been, in some measure, the slave of circumstances beyond human control. I would wish them to seek out for me, in the details I am about to give, some little oasis of fatality amid a wilderness of error. I would have them allow—what they cannot refrain from allowing—that, although temptation may have erewhile existed as great, man was never thus, at least, tempted before—certainly, never thus fell. And is it therefore that he has never thus suffered? Have I not indeed been living in a dream? And am I not now dying a victim to the horror and the mystery of the wildest of all sublunary visions?