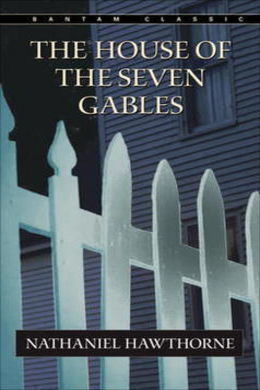 The House of the Seven Gables

The sins of one generation are visited upon another in a haunted New England mansion until the arrival of a young woman from the country breathes new air into mouldering lives and rooms. Written shortly after The Scarlet Letter, The House of the Seven Gables re-addresses the theme of human guilt in a style remarkable in both its descriptive virtuosity and its truly modern mix of fantasy and realism.

Halfway down a by-street of one of our New England towns stands a rusty wooden house, with seven acutely peaked gables, facing towards various points of the compass, and a huge, clustered chimney in the midst. The street is Pyncheon Street; the house is the old Pyncheon House; and an elm-tree, of wide circumference, rooted before the door, is familiar to every town-born child by the title of the Pyncheon Elm. On my occasional visits to the town aforesaid, I seldom failed to turn down Pyncheon Street, for the sake of passing through the shadow of these two antiquities,–the great elm-tree and the weather-beaten edifice.

The aspect of the venerable mansion has always affected me like a human countenance, bearing the traces not merely of outward storm and sunshine, but expressive also, of the long lapse of mortal life, and accompanying vicissitudes that have passed within. Were these to be worthily recounted, they would form a narrative of no small interest and instruction, and possessing, moreover, a certain remarkable unity, which might almost seem the result of artistic arrangement. But the story would include a chain of events extending over the better part of two centuries, and, written out with reasonable amplitude, would fill a bigger folio volume, or a longer series of duodecimos, than could prudently be appropriated to the annals of all New England during a similar period. It consequently becomes imperative to make short work with most of the traditionary lore of which the old Pyncheon House, otherwise known as the House of the Seven Gables, has been the theme. With a brief sketch, therefore, of the circumstances amid which the foundation of the house was laid, and a rapid glimpse at its quaint exterior, as it grew black in the prevalent east wind,–pointing, too, here and there, at some spot of more verdant mossiness on its roof and walls,–we shall commence the real action of our tale at an epoch not very remote from the present day. Still, there will be a connection with the long past–a reference to forgotten events and personages, and to manners, feelings, and opinions, almost or wholly obsolete–which, if adequately translated to the reader, would serve to illustrate how much of old material goes to make up the freshest novelty of human life. Hence, too, might be drawn a weighty lesson from the little-regarded truth, that the act of the passing generation is the germ which may and must produce good or evil fruit in a far-distant time; that, together with the seed of the merely temporary crop, which mortals term expediency, they inevitably sow the acorns of a more enduring growth, which may darkly overshadow their posterity.

The House of the Seven Gables, antique as it now looks, was not the first habitation erected by civilized man on precisely the same spot of ground. Pyncheon Street formerly bore the humbler appellation of Maule’s Lane, from the name of the original occupant of the soil, before whose cottage-door it was a cow-path. A natural spring of soft and pleasant water–a rare treasure on the sea-girt peninsula where the Puritan settlement was made–had early induced Matthew Maule to build a hut, shaggy with thatch, at this point, although somewhat too remote from what was then the centre of the village. In the growth of the town, however, after some thirty or forty years, the site covered by this rude hovel had become exceedingly desirable in the eyes of a prominent and powerful personage, who asserted plausible claims to the proprietorship of this and a large adjacent tract of land, on the strength of a grant from the legislature. Colonel Pyncheon, the claimant, as we gather from whatever traits of him are preserved, was characterized by an iron energy of purpose. Matthew Maule, on the other hand, though an obscure man, was stubborn in the defence of what he considered his right; and, for several years, he succeeded in protecting the acre or two of earth which, with his own toil, he had hewn out of the primeval forest, to be his garden ground and homestead. No written record of this dispute is known to be in existence. Our acquaintance with the whole subject is derived chiefly from tradition. It would be bold, therefore, and possibly unjust, to venture a decisive opinion as to its merits; although it appears to have been at least a matter of doubt, whether Colonel Pyncheon’s claim were not unduly stretched, in order to make it cover the small metes and bounds of Matthew Maule. What greatly strengthens such a suspicion is the fact that this controversy between two ill-matched antagonists–at a period, moreover, laud it as we may, when personal influence had far more weight than now–remained for years undecided, and came to a close only with the death of the party occupying the disputed soil. The mode of his death, too, affects the mind differently, in our day, from what it did a century and a half ago.