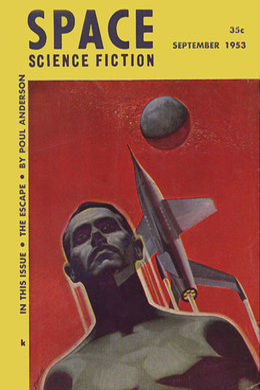 The Terran system is growing and expanding all the time. But an old and corrupt Centaurian Empire is holding Terra down, as it encircles the Terran system and will not let the humans grow out of their current empire. For this reason Terra is at war with Proxima Centauri and is trying to find a way of breaking free from the Centaurian’s hold upon them. Eventually Terra comes up with a concept for a bomb, called Icarus, that Proxima can not defend against. Then the odds start to side with Terra, and Terra prepares to fight with this new-found technology. The only problem being is that Icarus does not yet work which prevents Terra from using it against Proxima Centuari. This is where Thomas Cole, known as The Variable Man, comes in. Cole is a man from the past, from the time just before the First World War. He is brought into the present (or future depending on perspective) as an accident via a Time Bubble that was used for research about the past. He escapes from the authority in the future and spends a lot of time running from them afterwards. It is, however, discovered that this man has a certain genius to fix things and make things work. This is because he comes out of a period of time when humans had a natural genius and an ability to invent things and to solve problems. Read the novel to find out what happens with the Variable Man and the war between Terra and Proxima Centauri.

“Straight gain for the last quarter,” observed Kaplan, the lab organizer. He grinned proudly, as if personally responsible. “Not bad, Commissioner.”

“We’re catching up to them,” Reinhart retorted. “But too damn slowly. We must finally go over–and soon.”

Kaplan was in a talkative mood. “We design new offensive weapons, they counter with improved defenses. And nothing is actually made! Continual improvement, but neither we nor Centaurus can stop designing long enough to stabilize for production.”

“It will end,” Reinhart stated coldly, “as soon as Terra turns out a weapon for which Centaurus can build no defense.”

“Every weapon has a defense. Design and discord. Immediate obsolescence. Nothing lasts long enough to–”

“What we count on is the lag,” Reinhart broke in, annoyed. His hard gray eyes bored into the lab organizer and Kaplan slunk back. “The time lag between our offensive design and their counter development. The lag varies.” He waved impatiently toward the massed banks of SRB machines. “As you well know.”

At this moment, 9:30 AM, May 7, 2136, the statistical ratio on the SRB machines stood at 21-17 on the Centauran side of the ledger. All facts considered, the odds favored a successful repulsion by Proxima Centaurus of a Terran military attack. The ratio was based on the total information known to the SRB machines, on a gestalt of the vast flow of data that poured in endlessly from all sectors of the Sol and Centaurus systems.

21-17 on the Centauran side. But a month ago it had been 24-18 in the enemy’s favor. Things were improving, slowly but steadily. Centaurus, older and less virile than Terra, was unable to match Terra’s rate of technocratic advance. Terra was pulling ahead.

“If we went to war now,” Reinhart said thoughtfully, “we would lose. We’re not far enough along to risk an overt attack.” A harsh, ruthless glow twisted across his handsome features, distorting them into a stern mask. “But the odds are moving in our favor. Our offensive designs are gradually gaining on their defenses.”

The war would come soon. Reinhart knew it intuitively. The air was full of tension, the elan. He left the SRB rooms and hurried down the corridor to his own elaborately guarded office in the Security wing. It wouldn’t be long. He could practically feel the hot breath of destiny on his neck–for him a pleasant feeling. His thin lips set in a humorless smile, showing an even line of white teeth against his tanned skin. It made him feel good, all right. He’d been working at it a long time.

And then the long, dreary years of inaction between enemies where contact required years of travel, even at nearly the speed of light. The two systems were evenly matched. Screen against screen. Warship against power station. The Centauran Empire surrounded Terra, an iron ring that couldn’t be broken, rusty and corroded as it was. Radical new weapons had to be conceived, if Terra was to break out.

Through the windows of his office, Reinhart could see endless buildings and streets, Terrans hurrying back and forth. Bright specks that were commute ships, little eggs that carried businessmen and white-collar workers around. The huge transport tubes that shot masses of workmen to factories and labor camps from their housing units. All these people, waiting to break out. Waiting for the day.

Reinhart snapped on his vidscreen, the confidential channel. “Give me Military Designs,” he ordered sharply.