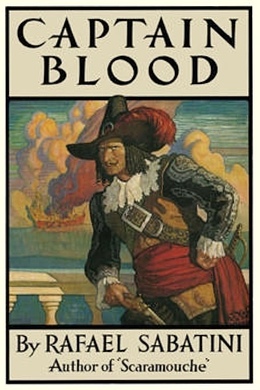 Peter Blood, a physician and English gentleman, turned pirate out of a rankling sense of injustice. Barely escaping the gallows after his arrest for treating wounded rebels, Blood is enslaved on a Barbados plantation. When he escapes, no ship sailing the Spanish Main is safe from Blood and his men. This classic adventure is alive with color, romance, and excitement and smoothly comments on the social injustices of slavery, the dangers of intolerance, the power of love, the role of fate, and the ways oppression can drive good men to desperate measures.

Peter Blood, bachelor of medicine and several other things besides, smoked a pipe and tended the geraniums boxed on the sill of his window above Water Lane in the town of Bridgewater.

Sternly disapproving eyes considered him from a window opposite, but went disregarded. Mr. Blood’s attention was divided between his task and the stream of humanity in the narrow street below; a stream which poured for the second time that day towards Castle Field, where earlier in the afternoon Ferguson, the Duke’s chaplain, had preached a sermon containing more treason than divinity.

These straggling, excited groups were mainly composed of men with green boughs in their hats and the most ludicrous of weapons in their hands. Some, it is true, shouldered fowling pieces, and here and there a sword was brandished; but more of them were armed with clubs, and most of them trailed the mammoth pikes fashioned out of scythes, as formidable to the eye as they were clumsy to the hand. There were weavers, brewers, carpenters, smiths, masons, bricklayers, cobblers, and representatives of every other of the trades of peace among these improvised men of war. Bridgewater, like Taunton, had yielded so generously of its manhood to the service of the bastard Duke that for any to abstain whose age and strength admitted of his bearing arms was to brand himself a coward or a papist.

Yet Peter Blood, who was not only able to bear arms, but trained and skilled in their use, who was certainly no coward, and a papist only when it suited him, tended his geraniums and smoked his pipe on that warm July evening as indifferently as if nothing were afoot. One other thing he did. He flung after those war-fevered enthusiasts a line of Horace–a poet for whose work he had early conceived an inordinate affection:

And now perhaps you guess why the hot, intrepid blood inherited from the roving sires of his Somersetshire mother remained cool amidst all this frenzied fanatical heat of rebellion; why the turbulent spirit which had forced him once from the sedate academical bonds his father would have imposed upon him, should now remain quiet in the very midst of turbulence. You realize how he regarded these men who were rallying to the banners of liberty–the banners woven by the virgins of Taunton, the girls from the seminaries of Miss Blake and Mrs. Musgrove, who–as the ballad runs–had ripped open their silk petticoats to make colours for King Monmouth’s army. That Latin line, contemptuously flung after them as they clattered down the cobbled street, reveals his mind. To him they were fools rushing in wicked frenzy upon their ruin.

You see, he knew too much about this fellow Monmouth and the pretty brown slut who had borne him, to be deceived by the legend of legitimacy, on the strength of which this standard of rebellion had been raised. He had read the absurd proclamation posted at the Cross at Bridgewater–as it had been posted also at Taunton and elsewhere–setting forth that “upon the decease of our Sovereign Lord Charles the Second, the right of succession to the Crown of England, Scotland, France, and Ireland, with the dominions and territories thereunto belonging, did legally descend and devolve upon the most illustrious and high-born Prince James, Duke of Monmouth, son and heir apparent to the said King Charles the Second.”

It had moved him to laughter, as had the further announcement that “James Duke of York did first cause the said late King to be poysoned, and immediately thereupon did usurp and invade the Crown.”

He knew not which was the greater lie. For Mr. Blood had spent a third of his life in the Netherlands, where this same James Scott–who now proclaimed himself James the Second, by the grace of God, King, et cetera–first saw the light some six-and-thirty years ago, and he was acquainted with the story current there of the fellow’s real paternity. Far from being legitimate–by virtue of a pretended secret marriage between Charles Stuart and Lucy Walter–it was possible that this Monmouth who now proclaimed himself King of England was not even the illegitimate child of the late sovereign. What but ruin and disaster could be the end of this grotesque pretension? How could it be hoped that England would ever swallow such a Perkin? And it was on his behalf, to uphold his fantastic claim, that these West Country clods, led by a few armigerous Whigs, had been seduced into rebellion!