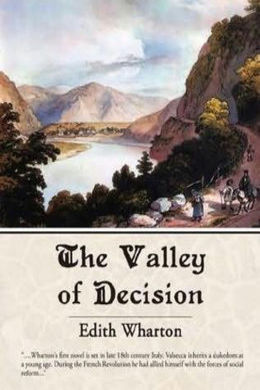 The Valley of Decision

This two part romance chronicles the rise to power of Odo Valsecca during the intellectual and political tumult which preceded the French Revolution. During his childhood and early manhood, Odo comes in close contact with all the major factions the peasantry, the clergy, the liberal freethinkers, and the nobility which have a vital stake in maintaining or subverting the antiquated power structure based on rigid class distinctions and superstitious religious traditions.

It was very still in the small neglected chapel. The noises of the farm came faintly through closed doors–voices shouting at the oxen in the lower fields, the querulous bark of the old house-dog, and Filomena’s angry calls to the little white-faced foundling in the kitchen.

The February day was closing, and a ray of sunshine, slanting through a slit in the chapel wall, brought out the vision of a pale haloed head floating against the dusky background of the chancel like a water-lily on its leaf. The face was that of the saint of Assisi–a sunken ravaged countenance, lit with an ecstasy of suffering that seemed not so much to reflect the anguish of the Christ at whose feet the saint knelt, as the mute pain of all poor down-trodden folk on earth.

When the small Odo Valsecca–the only frequenter of the chapel–had been taunted by the farmer’s wife for being a beggar’s brat, or when his ears were tingling from the heavy hand of the farmer’s son, he found a melancholy kinship in that suffering face; but since he had fighting blood in him too, coming on the mother’s side of the rude Piedmontese stock of the Marquesses di Donnaz, there were other moods when he turned instead to the stout Saint George in gold armour, just discernible through the grime and dust of the opposite wall.

The chapel of Pontesordo was indeed as wonderful a storybook as fate ever unrolled before the eyes of a neglected and solitary child. For a hundred years or more Pontesordo, a fortified manor of the Dukes of Pianura, had been used as a farmhouse; and the chapel was never opened save when, on Easter Sunday, a priest came from the town to say mass. At other times it stood abandoned, cobwebs curtaining the narrow windows, farm tools leaning against the walls, and the dust deep on the sea-gods and acanthus volutes of the altar. The manor of Pontesordo was very old. The country people said that the great warlock Virgil, whose dwelling-place was at Mantua, had once shut himself up for a year in the topmost chamber of the keep, engaged in unholy researches; and another legend related that Alda, wife of an early lord of Pianura, had thrown herself from its battlements to escape the pursuit of the terrible Ezzelino. The chapel adjoined this keep, and Filomena, the farmer’s wife, told Odo that it was even older than the tower and that the walls had been painted by early martyrs who had concealed themselves there from the persecutions of the pagan emperors.

On such questions a child of Odo’s age could obviously have no pronounced opinion, the less so as Filomena’s facts varied according to the seasons or her mood, so that on a day of east wind or when the worms were not hatching well, she had been known to affirm that the pagans had painted the chapel under Virgil’s instruction, to commemorate the Christians they had tortured. In spite of the distance to which these conflicting statements seemed to relegate them, Odo somehow felt as though these pale strange people–youths with ardent faces under their small round caps, damsels with wheat-coloured hair and boys no bigger than himself, holding spotted dogs in leash–were younger and nearer to him than the dwellers on the farm: Jacopone the farmer, the shrill Filomena, who was Odo’s foster-mother, the hulking bully their son and the abate who once a week came out from Pianura to give Odo religious instruction and who dismissed his questions with the invariable exhortation not to pry into matters that were beyond his years. Odo had loved the pictures in the chapel all the better since the abate, with a shrug, had told him they were nothing but old rubbish, the work of the barbarians.

Life at Pontesordo was in truth not very pleasant for an ardent and sensitive little boy of nine, whose remote connection with the reigning line of Pianura did not preserve him from wearing torn clothes and eating black bread and beans out of an earthen bowl on the kitchen doorstep.

“Go ask your mother for new clothes!” Filomena would snap at him, when his toes came through his shoes and the rents in his jacket-sleeves had spread beyond darning. “These you are wearing are my Giannozzo’s, as you well know, and every rag on your back is mine, if there were any law for poor folk, for not a copper of pay for your keep or a stitch of clothing for your body have we had these two years come Assumption–. What’s that? You can’t ask your mother, you say, because she never comes here? True enough–fine ladies let their brats live in cow-dung, but they must have Indian carpets under their own feet. Well, ask the abate, then–he has lace ruffles to his coat and a naked woman painted on his snuff box–What? He only holds his hands up when you ask? Well, then, go ask your friends on the chapel-walls–maybe they’ll give you a pair of shoes–though Saint Francis, for that matter, was the father of the discalced, and would doubtless tell you to go without!”