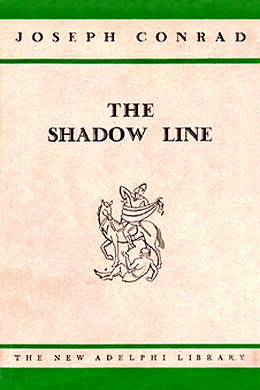 Conrad’s autobiographical novella of a young man in his first command as a sea captain. A series of crises prove incredibly difficult for his new authority, for the sea is curiously becalmed and the crew is weakened by feverish malaria. When the first mate’s fear convinces many that the ship is haunted and cursed by the malevolent spirit of the previous captain, the young man must cope with their superstition as well as the conspicuous absence of much-needed medicine. A suspenseful sea story of a young man in a defining moment of his life, when the indistinct line separating an inexperienced boy from a mature man becomes perfectly clear, “The Shadow-Line” brims with intense existence, straining responsibility, and threatened principles in a probing study of masculinity.

Only the young have such moments. I don’t mean the very young. No. The very young have, properly speaking, no moments. It is the privilege of early youth to live in advance of its days in all the beautiful continuity of hope which knows no pauses and no introspection.

One closes behind one the little gate of mere boyishness–and enters an enchanted garden. Its very shades glow with promise. Every turn of the path has its seduction. And it isn’t because it is an undiscovered country. One knows well enough that all mankind had streamed that way. It is the charm of universal experience from which one expects an uncommon or personal sensation–a bit of one’s own.

One goes on recognizing the landmarks of the predecessors, excited, amused, taking the hard luck and the good luck together–the kicks and the half-pence, as the saying is–the picturesque common lot that holds so many possibilities for the deserving or perhaps for the lucky. Yes. One goes on. And the time, too, goes on–till one perceives ahead a shadow-line warning one that the region of early youth, too, must be left behind.

This is the period of life in which such moments of which I have spoken are likely to come. What moments? Why, the moments of boredom, of weariness, of dissatisfaction. Rash moments. I mean moments when the still young are inclined to commit rash actions, such as getting married suddenly or else throwing up a job for no reason.

This is not a marriage story. It wasn’t so bad as that with me. My action, rash as it was, had more the character of divorce–almost of desertion. For no reason on which a sensible person could put a finger I threw up my job–chucked my berth–left the ship of which the worst that could be said was that she was a steamship and therefore, perhaps, not entitled to that blind loyalty which. . . . However, it’s no use trying to put a gloss on what even at the time I myself half suspected to be a caprice.

It was in an Eastern port. She was an Eastern ship, inasmuch as then she belonged to that port. She traded among dark islands on a blue reef-scarred sea, with the Red Ensign over the taffrail and at her masthead a house-flag, also red, but with a green border and with a white crescent in it. For an Arab owned her, and a Syed at that. Hence the green border on the flag. He was the head of a great House of Straits Arabs, but as loyal a subject of the complex British Empire as you could find east of the Suez Canal. World politics did not trouble him at all, but he had a great occult power amongst his own people.

It was all one to us who owned the ship. He had to employ white men in the shipping part of his business, and many of those he so employed had never set eyes on him from the first to the last day. I myself saw him but once, quite accidentally on a wharf–an old, dark little man blind in one eye, in a snowy robe and yellow slippers. He was having his hand severely kissed by a crowd of Malay pilgrims to whom he had done some favour, in the way of food and money. His alms-giving, I have heard, was most extensive, covering almost the whole Archipelago. For isn’t it said that “The charitable man is the friend of Allah”?

Excellent (and picturesque) Arab owner, about whom one needed not to trouble one’s head, a most excellent Scottish ship–for she was that from the keep up–excellent sea-boat, easy to keep clean, most handy in every way, and if it had not been for her internal propulsion, worthy of any man’s love, I cherish to this day a profound respect for her memory. As to the kind of trade she was engaged in and the character of my shipmates, I could not have been happier if I had had the life and the men made to my order by a benevolent Enchanter.

And suddenly I left all this. I left it in that, to us, inconsequential manner in which a bird flies away from a comfortable branch. It was as though all unknowing I had heard a whisper or seen something. Well–perhaps! One day I was perfectly right and the next everything was gone–glamour, flavour, interest, contentment–everything. It was one of these moments, you know. The green sickness of late youth descended on me and carried me off. Carried me off that ship, I mean.

We were only four white men on board, with a large crew of Kalashes and two Malay petty officers. The Captain stared hard as if wondering what ailed me. But he was a sailor, and he, too, had been young at one time. Presently a smile came to lurk under his thick iron-gray moustache, and he observed that, of course, if I felt I must go he couldn’t keep me by main force. And it was arranged that I should be paid off the next morning. As I was going out of his cabin he added suddenly, in a peculiar wistful tone, that he hoped I would find what I was so anxious to go and look for. A soft, cryptic utterance which seemed to reach deeper than any diamond-hard tool could have done. I do believe he understood my case.