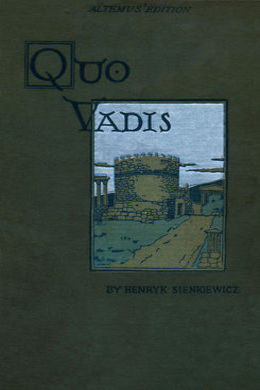 A Narrative of the Time of Nero

Quo Vadis is a love story of Marcus Vinicius, a passionate young Roman tribune, and Lygia Callina, a beautiful and gentle Christian maiden of royal Lygian descent and a hostage of Rome, raised in a patrician home. At first Marcus, a typical aristocratic Roman libertine of his time, has no notion of love and merely desires Lygia with erotic animalistic intensity. Through political machinations of the elegant Petronius he contrives to have her taken by force from her foster home and into the decadent and terrible splendor of the court of Ceasar, setting in motion a course of events that culminate in his own spiritual redemption. Intricately researched, populated with vibrant historical figures, and gorgeous period detail, bloody spectacle and intimate beauty, this is an epic tapestry of the triumph of love, faith and sacrifice.

PETRONIUS woke only about midday, and as usual greatly wearied. The evening before he had been at one of Nero’s feasts, which was prolonged till late at night. For some time his health had been failing. He said himself that he woke up benumbed, as it were, and without power of collecting his thoughts. But the morning bath and careful kneading of the body by trained slaves hastened gradually the course of his slothful blood, roused him, quickened him, restored his strength, so that he issued from the elæothesium, that is, the last division of the bath, as if he had risen from the dead, with eyes gleaming from wit and gladness, rejuvenated, filled with life, exquisite, so unapproachable that Otho himself could not compare with him, and was really that which he had been called,—arbiter elegantiarum.

He visited the public baths rarely, only when some rhetor happened there who roused admiration and who was spoken of in the city, or when in the ephebias there were combats of exceptional interest. Moreover, he had in his own “insula” private baths which Celer, the famous contemporary of Severus, had extended for him, reconstructed and arranged with such uncommon taste that Nero himself acknowledged their excellence over those of the Emperor, though the imperial baths were more extensive and finished with incomparably greater luxury.

After that feast, at which he was bored by the jesting of Vatinius with Nero, Lucan, and Seneca, he took part in a diatribe as to whether woman has a soul. Rising late, he used, as was his custom, the baths. Two enormous balneatores laid him on a cypress table covered with snow–white Egyptian byssus, and with hands dipped in perfumed olive oil began to rub his shapely body; and he waited with closed eyes till the heat of the laconicum and the heat of their hands passed through him and expelled weariness.