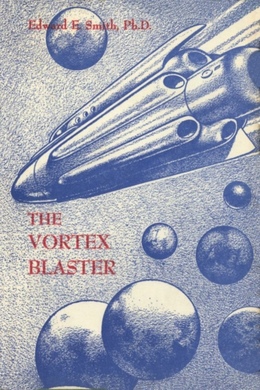 One man against the basic energy of the universe, unleashed in ravening fury that was Storm Cloud. Unique was the only way to describe him, yet alone in his single-handed battle. The appalling destructiveness of a loose atomic vortex could be cancelled out only by destroying the vortex itself. While not even the most massive and modern of electronic computers could figure out how to destroy a loose vortex, Storm Cloud could and did. To Galactic Civilization, the loose vortices were just one menace among many. It was Storm’s unique brain, itself a computer with fantastic powers that enabled him to select and direct a duodecaplylatomate bomb with exactly the right energy to snuff each vortex out of existence. The day a runaway vortex exploded in his home was the day Storm Cloud became the Vortex Blaster!

“Unsinkable” ships that, before the days of Bergenholm and of atomic and cosmic energy, sank into the waters of Earth.

More particularly, safety devices which, while protecting against one agent of destruction, attract magnet-like another and worse. Such as the armored cable within the walls of a wooden house. It protects the electrical conductors within it against accidental external shorts; but, inadequately grounded, it may attract and upon occasion has attracted the stupendous force of lightning. Then, steel armor exploding into incandescence inside walls and ceilings, that house’s existence thereafter is to be measured in minutes.

Specifically, four lightning rods. The lightning rods protecting the chromium, glass, and plastic home of Neal Cloud. Those rods were adequately grounded, with copper-silver cables the size of a big man’s forefinger; for Neal Cloud, Doctor of Nucleonics, knew his lightning and was taking no chances whatever with the safety of his wife and children.

He did not know, did not even suspect, that under certain conditions of atmospheric potential and of ground-magnetic stress his perfectly-designed and perfectly-installed system would become a super-powerful attractor for flying vortices of atomic disintegration.

So now Neal Cloud, nucleonicist, sat at his desk in a strained, dull apathy. His face was a yellowish-gray white, his tendoned hands gripped rigidly the arms of his chair. His eyes, hard and lifeless, stared unseeingly past the small, three-dimensional block portrait of all that had made life worth living.

For his guardian against lightning had been a vortex-magnet at the moment when some luckless wight had tried to abate the nuisance of a “loose” atomic vortex. That wight dies, of course–they almost always did–and the vortex, instead of being destroyed, was simply broken up into a number of widely-scattered new vortices. And one of those bits of furious, uncontrolled energy, resembling a handful of substance torn from the depths of a sun, darted toward and shot downward to earth through Neal Cloud’s new house.

That house did not burn; it exploded. Nothing of it, in it, or near it stood a chance, for in a few seconds the place where it had been was a crater of seething, boiling lava–a crater which filled the atmosphere with poisonous vapors; which flooded all nearby space with lethal radiations.

Cosmically, the whole thing was infinitesimal. Ever since man learned how to use atomic power the vortices of disintegration had been breaking out of control. Such accidents had been happening, and would continue to happen. More than one world, perhaps, had been or would be consumed to the last gram by such loose atomic vortices. What of that? Of what real importance are a few grains of sand to a pile five thousand miles long, a hundred miles wide, and ten miles deep?

Even to that individual grain of sand called “Earth”–or, in modern parlance, “Sol Three,” or “Tellus of Sol,” or simply “Tellus”–the affair was negligible. One man had died; but, in dying, he had added one more page to the thick bulk of negative results already on file. That Mrs. Cloud and her children had perished was merely unfortunate. The vortex itself was not yet a real threat to Tellus. It was a “new” one, and thus it would be a long time before it would become other than a local menace.

Nor, to any except a tiny fraction of Earth’s inhabitants, was the question of loose atomic vortices a matter of concern. It was unthinkable that Tellus, the point of origin and the very center of Galactic Civilization, could cease to exist. Long before such vortices could eat away much of her mass, or poison much of her atmosphere, Earth’s scientists would have solved the problem.

But to Neal Cloud the accident was ultimate catastrophe. His personal universe had crashed in ruins; what was left was not worth picking up. He and Jo had been married for more than fifteen years and the bonds between them had grown stronger, deeper, truer with every passing day. And the kids…it couldn’t have happened…fate COULDN’T do this to him…but it had…it could. Gone…gone… GONE!

And to Neal Cloud, sitting there at his desk in black abstraction, with maggots of thought gnawing holes in his mind, the catastrophe was doubly galling because of its cruel irony. For he was second from the top in the Vortex Control Laboratory; his life’s work had been a search for a means or method of extinguishing loose atomic vortices.

His eyes focused vaguely upon the portrait. Wavy brown hair…clear, honest gray eyes…lines of character, of strength and of humor… sweetly curved lips, ready to smile or to kiss….