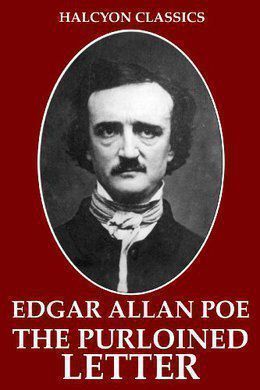 The Purloined Letter is the third of the three stories featuring the detective C. Auguste Dupin, the other two being The Murders in the Rue Morgue and The Mystery of Marie Roget. These stories are considered important forerunners of the modern detective story. The method Poe’s detective, Dupin, uses to solve the crime was quite innovative. He tried to identify with the criminal and to “think like he would.” In May of 1844 Poe wrote to James Russell Lowell that he considered it “perhaps the best of my tales of ratiocination”

At Paris, just after dark one gusty evening in the autumn of 18-, I was enjoying the twofold luxury of meditation and a meerschaum, in company with my friend C. Auguste Dupin, in his little back library, or book-closet, au troisiême, No. 33, Rue Dunôt, Faubourg St. Germain. For one hour at least we had maintained a profound silence; while each, to any casual observer, might have seemed intently and exclusively occupied with the curling eddies of smoke that oppressed the atmosphere of the chamber. For myself, however, I was mentally discussing certain topics which had formed matter for conversation between us at an earlier period of the evening; I mean the affair of the Rue Morgue, and the mystery attending the murder of Marie Rogêt. I looked upon it, therefore, as something of a coincidence, when the door of our apartment was thrown open and admitted our old acquaintance, Monsieur G–, the Prefect of the Parisian police.

We gave him a hearty welcome; for there was nearly half as much of the entertaining as of the contemptible about the man, and we had not seen him for several years. We had been sitting in the dark, and Dupin now arose for the purpose of lighting a lamp, but sat down again, without doing so, upon G.’s saying that he had called to consult us, or rather to ask the opinion of my friend, about some official business which had occasioned a great deal of trouble.

“If it is any point requiring reflection,” observed Dupin, as he forebore to enkindle the wick, “we shall examine it to better purpose in the dark.”

“That is another of your odd notions,” said the Prefect, who had a fashion of calling every thing “odd” that was beyond his comprehension, and thus lived amid an absolute legion of “oddities.”

“Very true,” said Dupin, as he supplied his visiter with a pipe, and rolled towards him a comfortable chair.

“And what is the difficulty now?” I asked. “Nothing more in the assassination way, I hope?”

“Oh no; nothing of that nature. The fact is, the business is very simple indeed, and I make no doubt that we can manage it sufficiently well ourselves; but then I thought Dupin would like to hear the details of it, because it is so excessively odd.”

“Why, yes; and not exactly that, either. The fact is, we have all been a good deal puzzled because the affair is so simple, and yet baffles us altogether.”

“Perhaps it is the very simplicity of the thing which puts you at fault,” said my friend.

“What nonsense you do talk!” replied the Prefect, laughing heartily.

“Perhaps the mystery is a little too plain,” said Dupin.

“Oh, good heavens! who ever heard of such an idea?”

“A little too self-evident.”

“And what, after all, is the matter on hand?” I asked.

“Why, I will tell you,” replied the Prefect, as he gave a long, steady and contemplative puff, and settled himself in his chair.