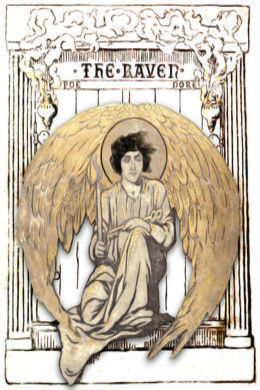 The Raven is noted for its musicality, stylized language and supernatural atmosphere, it tells of the mysterious visit of a talking raven to a distraught lover, tracing his slow descent into madness. This illustrated version contains detailed, masterly engravings by Gustave Dorés, from a 19th-century edition of The Raven, among the most popular American poems ever written. Dreamlike, otherworldly illustrations perfectly capture the bleak despair and mournful musings of Poe’s poem. Includes an introduction/analysis by Edmund. C. Stedman.

The secret of a poem, no less than a jest’s prosperity, lies in the ear of him that hears it. Yield to its spell, accept the poet’s mood: this, after all, is what the sages answer when you ask them of its value. Even though the poet himself, in his other mood, tell you that his art is but sleight of hand, his food enchanter’s food, and offer to show you the trick of it,–believe him not. Wait for his prophetic hour; then give yourself to his passion, his joy or pain. “We are in Love’s hand to-day!” sings Gautier, in Swinburne’s buoyant paraphrase,–and from morn to sunset we are wafted on the violent sea: there is but one love, one May, one flowery strand. Love is eternal, all else unreal and put aside. The vision has an end, the scene changes; but we have gained something, the memory of a charm. As many poets, so many charms. There is the charm of Evanescence, that which lends to supreme beauty and grace an aureole of Pathos. Share with Landor his one “night of memories and of sighs” for Rose Aylmer, and you have this to the full.

And now take the hand of a new-world minstrel, strayed from some proper habitat to that rude and dissonant America which, as Baudelaire saw, “was for Poe only a vast prison through which he ran, hither and thither, with the feverish agitation of a being created to breathe in a purer world,” and where “his interior life, spiritual as a poet, spiritual even as a drunkard, was but one perpetual effort to escape the influence of this antipathetical atmosphere.” Clasp the sensitive hand of a troubled singer dreeing thus his weird, and share with him the clime in which he found,–never throughout the day, always in the night,–if not the Atlantis whence he had wandered, at least a place of refuge from the bounds in which by day he was immured.

To one land only he has power to lead you, and for one night only can you share his dream. A tract of neither Earth nor Heaven: “No-man’s-land,” out of Space, out of Time. Here are the perturbed ones, through whose eyes, like those of the Cenci, the soul finds windows though the mind is dazed; here spirits, groping for the path which leads to Eternity, are halted and delayed. It is the limbo of “planetary souls,” wherein are all moonlight uncertainties, all lost loves and illusions. Here some are fixed in trance, the only respite attainable; others

“move fantastically To a discordant melody:”

“Sheeted Memories of the Past– Shrouded forms that start and sigh As they pass the wanderer by.”

Such is the land, and for one night we enter it,–a night of astral phases and recurrent chimes. Its monodies are twelve poems, whose music strives to change yet ever is the same. One by one they sound, like the chiming of the brazen and ebony clock, in “The Masque of the Red Death,” which made the waltzers pause with “disconcert and tremulousness and meditation,” as often as the hour came round.

Of all these mystical cadences, the plaint of The Raven, vibrating through the portal, chiefly has impressed the outer world. What things go to the making of a poem,–and how true in this, as in most else, that race which named its bards “the makers”? A work is called out of the void. Where there was nothing, it remains,–a new creation, part of the treasure of mankind. And a few exceptional lyrics, more than others that are equally creative, compel us to think anew how bravely the poet’s pen turns things unknown

“to shapes, and gives to airy nothing A local habitation, and a name.”

Each seems without a prototype, yet all fascinate us with elements wrested from the shadow of the Supernatural. Now the highest imagination is concerned about the soul of things; it may or may not inspire the Fantasy that peoples with images the interlunar vague. Still, one of these lyrics, in its smaller way, affects us with a sense of uniqueness, as surely as the sublimer works of a supernatural cast,–Marlowe’s “Faustus,” the “Faust” of Goethe, “Manfred,” or even those ethereal masterpieces, “The Tempest” and “A Midsummer Night’s Dream.” More than one, while otherwise unique, has some burden or refrain which haunts the memory,–once heard, never forgotten, like the tone of a rarely used but distinctive organ-stop. Notable among them is Buerger’s “Lenore,” that ghostly and resonant ballad, the lure and foil of the translators. Few will deny that Coleridge’s wondrous “Rime of the Ancient Mariner” stands at their very head. “Le Juif-Errant” would have claims, had Beranger been a greater poet; and, but for their remoteness from popular sympathy, “The Lady of Shalott” and “The Blessed Damozel” might be added to the list. It was given to Edgar Allan Poe to produce two lyrics, “The Bells” and The Raven, each of which, although perhaps of less beauty than those of Tennyson and Rossetti, is a unique. “Ulalume,” while equally strange and imaginative, has not the universal quality that is a portion of our test.