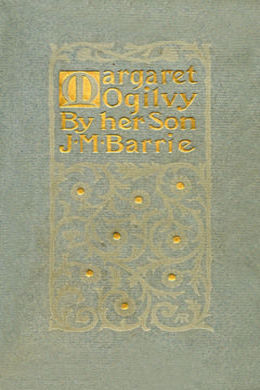 Barrie’s autobiography of his mother, published after her death, and which tells a lot of Barrie’s early emotional life. Barrie descibes how strong minded and intelligent she was and how she wanted everything done done her way.

On the day I was born we bought six hair–bottomed chairs, and in our little house it was an event, the first great victory in a woman’s long campaign; how they had been laboured for, the pound–note and the thirty threepenny–bits they cost, what anxiety there was about the purchase, the show they made in possession of the west room, my father’s unnatural coolness when he brought them in (but his face was white)—I so often heard the tale afterwards, and shared as boy and man in so many similar triumphs, that the coming of the chairs seems to be something I remember, as if I had jumped out of bed on that first day, and run ben to see how they looked. I am sure my mother’s feet were ettling to be ben long before they could be trusted, and that the moment after she was left alone with me she was discovered barefooted in the west room, doctoring a scar (which she had been the first to detect) on one of the chairs, or sitting on them regally, or withdrawing and re–opening the door suddenly to take the six by surprise. And then, I think, a shawl was flung over her (it is strange to me to think it was not I who ran after her with the shawl), and she was escorted sternly back to bed and reminded that she had promised not to budge, to which her reply was probably that she had been gone but an instant, and the implication that therefore she had not been gone at all. Thus was one little bit of her revealed to me at once: I wonder if I took note of it. Neighbours came in to see the boy and the chairs. I wonder if she deceived me when she affected to think that there were others like us, or whether I saw through her from the first, she was so easily seen through. When she seemed to agree with them that it would be impossible to give me a college education, was I so easily taken in, or did I know already what ambitions burned behind that dear face? when they spoke of the chairs as the goal quickly reached, was I such a newcomer that her timid lips must say ‘They are but a beginning’before I heard the words? And when we were left together, did I laugh at the great things that were in her mind, or had she to whisper them to me first, and then did I put my arm round her and tell her that I would help? Thus it was for such a long time: it is strange to me to feel that it was not so from the beginning.

It is all guess–work for six years, and she whom I see in them is the woman who came suddenly into view when they were at an end. Her timid lips I have said, but they were not timid then, and when I knew her the timid lips had come. The soft face—they say the face was not so soft then. The shawl that was flung over her—we had not begun to hunt her with a shawl, nor to make our bodies a screen between her and the draughts, nor to creep into her room a score of times in the night to stand looking at her as she slept. We did not see her becoming little then, nor sharply turn our heads when she said wonderingly how small her arms had grown. In her happiest moments—and never was a happier woman—her mouth did not of a sudden begin to twitch, and tears to lie on the mute blue eyes in which I have read all I know and would ever care to write. For when you looked into my mother’s eyes you knew, as if He had told you, why God sent her into the world—it was to open the minds of all who looked to beautiful thoughts. And that is the beginning and end of literature. Those eyes that I cannot see until I was six years old have guided me through life, and I pray God they may remain my only earthly judge to the last. They were never more my guide than when I helped to put her to earth, not whimpering because my mother had been taken away after seventy–six glorious years of life, but exulting in her even at the grave.

She had a son who was far away at school. I remember very little about him, only that he was a merry–faced boy who ran like a squirrel up a tree and shook the cherries into my lap. When he was thirteen and I was half his age the terrible news came, and I have been told the face of my mother was awful in its calmness as she set off to get between Death and her boy. We trooped with her down the brae to the wooden station, and I think I was envying her the journey in the mysterious wagons; I know we played around her, proud of our right to be there, but I do not recall it, I only speak from hearsay. Her ticket was taken, she had bidden us good–bye with that fighting face which I cannot see, and then my father came out of the telegraph–office and said huskily, ‘He’s gone!’ Then we turned very quietly and went home again up the little brae. But I speak from hearsay no longer; I knew my mother for ever now.

That is how she got her soft face and her pathetic ways and her large charity, and why other mothers ran to her when they had lost a child.