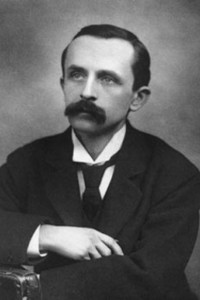 James Matthew Barrie, more commonly known as J. M. Barrie, was a Scottish author and dramatist. He is best remembered for creating Peter Pan, the boy who refused to grow up, which he based on his friends, the Llewelyn Davies boys. He is also credited with popularising the name Wendy, which was very uncommon before he gave it to the heroine of Peter Pan. Barrie’s most famous and enduring work, Peter Pan, or The Boy Who Wouldn’t Grow Up, had its first stage performance on 27 December 1904. This play introduced audiences to the name Wendy, which was inspired by a young girl, Margaret Henley, who called Barrie ‘Friendy’, but could not pronounce her Rs very well and so it came out as ‘Fwendy’. It has been performed innumerable times since then, was developed by Barrie into the 1911 novel Peter and Wendy, and has been adapted by others into feature films, musicals, and more.

Barrie had a long string of successes on the stage after Peter Pan, many of which discuss social concerns. The Twelve Pound Look shows a wife divorcing a peer and gaining an independent income. Other plays, such as Mary Rose and a subplot in Dear Brutus revisit the image of the ageless child. His final play was The Boy David (1936), which dramatised the Biblical story of King Saul and the young David. Like the role of Peter Pan, that of David was played by a woman, Elisabeth Bergner, for whom Barrie wrote the play. (source: Wikipedia)

J. M. Barrie wrote plays to promote support for the war to end all wars. Yet they are not plays about war, but rather about parents and the children the...read more »

Barrie’s autobiography of his mother, published after her death, and which tells a lot of Barrie’s early emotional life. Barrie descibes how strong mind...read more »

An ode to the power of nicotine, by the Scottish novelist and dramatist, best known for inventing the character of Peter Pan. My Lady Nicotine is one of...read more »

Peter pan, the mischievous boy who refuses to grow up, lands in the Darling’s proper middle-class home to look for his shadow. He befriends Wendy, John ...read more »

Peter Pan, the boy who refused to grow up, is one of the immortals of children’s literature. J. M. Barrie first created Peter Pan as a baby, living in s...read more »

This four-act comedy is an adult fairy tale of sorts, brought to life by Barrie’s charming imagination and ability to weave between reality and fantasy....read more »

The English production of this play in 1902 starred Henry Irving. In 1903, the play was produced on Broadway by Charles Frohman, starring William Gillet...read more »

When published, J.M. Barrie’s The Little Minister was quickly identified, along with Thomas Hardy’s Tess of the D’Urbervilles, as one of the two great l...read more »

The Little White Bird is a series of short episodes with tones ranging from fantasy and whimsy to social comedy with dark aggressive undertonesm. It acc...read more »

Married by special agreement to John Shand, Maggie Wylie proves to be a highly effective voice for her politician husband. One of the author’s most real...read more »