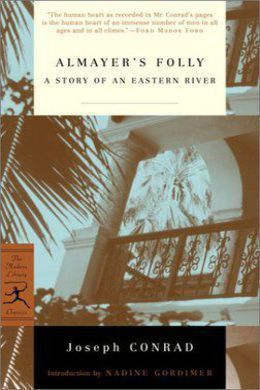 A Story of an Eastern River

Lush prose and penetrating psychological insight infuse Conrad’s first novel with the qualities that have made him one of the most popular and most studied writers in English literature. The novel chronicles the tragic decline of a Dutch merchant isolated in 19th-century Borneo, the machinations of his bitter Malayan wife, and the loss of his much loved daughter. Conrad establishes the themes of betrayal, isolation, and colonialism that he would explore throughout the rest of his life and work.

The well-known shrill voice startled Almayer from his dream of splendid future into the unpleasant realities of the present hour. An unpleasant voice too. He had heard it for many years, and with every year he liked it less. No matter; there would be an end to all this soon.

He shuffled uneasily, but took no further notice of the call. Leaning with both his elbows on the balustrade of the verandah, he went on looking fixedly at the great river that flowed–indifferent and hurried–before his eyes. He liked to look at it about the time of sunset; perhaps because at that time the sinking sun would spread a glowing gold tinge on the waters of the Pantai, and Almayer’s thoughts were often busy with gold; gold he had failed to secure; gold the others had secured–dishonestly, of course–or gold he meant to secure yet, through his own honest exertions, for himself and Nina. He absorbed himself in his dream of wealth and power away from this coast where he had dwelt for so many years, forgetting the bitterness of toil and strife in the vision of a great and splendid reward. They would live in Europe, he and his daughter. They would be rich and respected. Nobody would think of her mixed blood in the presence of her great beauty and of his immense wealth. Witnessing her triumphs he would grow young again, he would forget the twenty-five years of heart-breaking struggle on this coast where he felt like a prisoner. All this was nearly within his reach. Let only Dain return! And return soon he must–in his own interest, for his own share. He was now more than a week late! Perhaps he would return to-night. Such were Almayer’s thoughts as, standing on the verandah of his new but already decaying house–that last failure of his life–he looked on the broad river. There was no tinge of gold on it this evening, for it had been swollen by the rains, and rolled an angry and muddy flood under his inattentive eyes, carrying small drift-wood and big dead logs, and whole uprooted trees with branches and foliage, amongst which the water swirled and roared angrily.

One of those drifting trees grounded on the shelving shore, just by the house, and Almayer, neglecting his dream, watched it with languid interest. The tree swung slowly round, amid the hiss and foam of the water, and soon getting free of the obstruction began to move down stream again, rolling slowly over, raising upwards a long, denuded branch, like a hand lifted in mute appeal to heaven against the river’s brutal and unnecessary violence. Almayer’s interest in the fate of that tree increased rapidly. He leaned over to see if it would clear the low point below. It did; then he drew back, thinking that now its course was free down to the sea, and he envied the lot of that inanimate thing now growing small and indistinct in the deepening darkness. As he lost sight of it altogether he began to wonder how far out to sea it would drift. Would the current carry it north or south? South, probably, till it drifted in sight of Celebes, as far as Macassar, perhaps!

Macassar! Almayer’s quickened fancy distanced the tree on its imaginary voyage, but his memory lagging behind some twenty years or more in point of time saw a young and slim Almayer, clad all in white and modest-looking, landing from the Dutch mail-boat on the dusty jetty of Macassar, coming to woo fortune in the godowns of old Hudig. It was an important epoch in his life, the beginning of a new existence for him. His father, a subordinate official employed in the Botanical Gardens of Buitenzorg, was no doubt delighted to place his son in such a firm. The young man himself too was nothing loth to leave the poisonous shores of Java, and the meagre comforts of the parental bungalow, where the father grumbled all day at the stupidity of native gardeners, and the mother from the depths of her long easy-chair bewailed the lost glories of Amsterdam, where she had been brought up, and of her position as the daughter of a cigar dealer there.

Almayer had left his home with a light heart and a lighter pocket, speaking English well, and strong in arithmetic; ready to conquer the world, never doubting that he would.

After those twenty years, standing in the close and stifling heat of a Bornean evening, he recalled with pleasurable regret the image of Hudig’s lofty and cool warehouses with their long and straight avenues of gin cases and bales of Manchester goods; the big door swinging noiselessly; the dim light of the place, so delightful after the glare of the streets; the little railed-off spaces amongst piles of merchandise where the Chinese clerks, neat, cool, and sad-eyed, wrote rapidly and in silence amidst the din of the working gangs rolling casks or shifting cases to a muttered song, ending with a desperate yell.