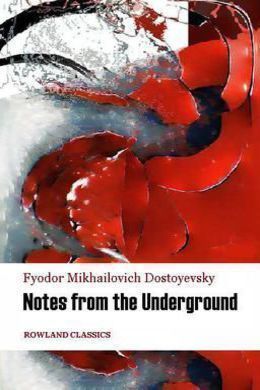 Notes from the Underground

One of the most profound and most unsettling works of modern literature, Notes from Underground remains a cultural and literary watershed. In these pages Dostoevsky unflinchingly examines the dark, mysterious depths of the human heart. The Underground Man so chillingly depicted here has become an archetypal figure — loathsome and prophetic — in contemporary culture.

I am a sick man…I am a spiteful man. I am an unattractive man. I believe my liver is diseased. However, I know nothing at all about my disease, and do not know for certain what ails me. I don’t consult a doctor for it, and never have, though I have a respect for medicine and doctors. Besides, I am extremely superstitious, sufficiently so to respect medicine, anyway (I am well–educated enough not to be superstitious, but I am superstitious). No, I refuse to consult a doctor from spite. That you probably will not understand. Well, I understand it, though. Of course, I can’t explain who it is precisely that I am mortifying in this case by my spite: I am perfectly well aware that I cannot “pay out” the doctors by not consulting them; I know better than anyone that by all this I am only injuring myself and no one else. But still, if I don’t consult a doctor it is from spite. My liver is bad, well—let it get worse!

I have been going on like that for a long time—twenty years. Now I am forty. I used to be in the government service, but am no longer. I was a spiteful official. I was rude and took pleasure in being so. I did not take bribes, you see, so I was bound to find a recompense in that, at least. (A poor jest, but I will not scratch it out. I wrote it thinking it would sound very witty; but now that I have seen myself that I only wanted to show off in a despicable way, I will not scratch it out on purpose!)

When petitioners used to come for information to the table at which I sat, I used to grind my teeth at them, and felt intense enjoyment when I succeeded in making anybody unhappy. I almost did succeed. For the most part they were all timid people—of course, they were petitioners. But of the uppish ones there was one officer in particular I could not endure. He simply would not be humble, and clanked his sword in a disgusting way. I carried on a feud with him for eighteen months over that sword. At last I got the better of him. He left off clanking it. That happened in my youth, though.

But do you know, gentlemen, what was the chief point about my spite? Why, the whole point, the real sting of it lay in the fact that continually, even in the moment of the acutest spleen, I was inwardly conscious with shame that I was not only not a spiteful but not even an embittered man, that I was simply scaring sparrows at random and amusing myself by it. I might foam at the mouth, but bring me a doll to play with, give me a cup of tea with sugar in it, and maybe I should be appeased. I might even be genuinely touched, though probably I should grind my teeth at myself afterwards and lie awake at night with shame for months after. That was my way.

I was lying when I said just now that I was a spiteful official. I was lying from spite. I was simply amusing myself with the petitioners and with the officer, and in reality I never could become spiteful. I was conscious every moment in myself of many, very many elements absolutely opposite to that. I felt them positively swarming in me, these opposite elements. I knew that they had been swarming in me all my life and craving some outlet from me, but I would not let them, would not let them, purposely would not let them come out. They tormented me till I was ashamed: they drove me to convulsions and—sickened me, at last, how they sickened me! Now, are not you fancying, gentlemen, that I am expressing remorse for something now, that I am asking your forgiveness for something? I am sure you are fancying that… However, I assure you I do not care if you are…

It was not only that I could not become spiteful, I did not know how to become anything; neither spiteful nor kind, neither a rascal nor an honest man, neither a hero nor an insect. Now, I am living out my life in my corner, taunting myself with the spiteful and useless consolation that an intelligent man cannot become anything seriously, and it is only the fool who becomes anything. Yes, a man in the nineteenth century must and morally ought to be pre–eminently a characterless creature; a man of character, an active man is pre–eminently a limited creature. That is my conviction of forty years. I am forty years old now, and you know forty years is a whole lifetime; you know it is extreme old age. To live longer than forty years is bad manners, is vulgar, immoral. Who does live beyond forty? Answer that, sincerely and honestly I will tell you who do: fools and worthless fellows. I tell all old men that to their face, all these venerable old men, all these silver–haired and reverend seniors! I tell the whole world that to its face! I have a right to say so, for I shall go on living to sixty myself. To seventy! To eighty! … Stay, let me take breath…