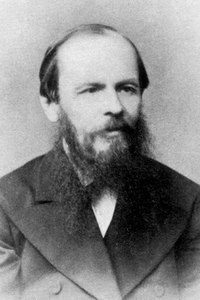 Fyodor Mikhaylovich Dostoyevsky was a Russian writer, essayist and philosopher, perhaps most recognized today for his novels Crime and Punishment and The Brothers Karamazov. Dostoyevsky is considered one of Europe’s major novelists. His literary output explores human psychology in the troubled political, social and spiritual context of 19th-century Russian society. Considered by many as a founder, or precursor of 20th-century existentialism, his Notes from Underground, written in the embittered voice of the anonymous “underground man”, was called by Walter Kaufmann the “best overture for existentialism ever written.”

In 1844, after serving five years in the army, Dostoyevsky started to write his own fiction and in 1845 his first work, the epistolary short novel, Poor Folk, was met with great acclaim. As legend has it, the editor of the magazine, poet Nikolai Nekrasov, walked into the office of liberal critic Vissarion Belinsky and announced, “a new Gogol has arisen!” Belinsky, his followers, and many others agreed. After the novel was fully published in book form at the beginning of the next year, Dostoyevsky became a literary celebrity at the age of 24.

Determined to overreach his humanity and assert his untrammeled individual will, Raskolnikov, and impoverished student living in the St. Petersburg of t...read more »

An extremely political book, Demons is a testimonial of life in Imperial Russia in the late 19th century. As the revolutionary democrats begin to rise i...read more »

One of the most profound and most unsettling works of modern literature, Notes from Underground remains a cultural and literary watershed. In these page...read more »

Poor Folk is an epistolary novel – that is, a tale told as a series of letters between the characters. And oh, what characters these are! Makar Dievushk...read more »

Dostoyevsky’s short stories show him to be equally adept at the short story as with the novel. Exploring many of the same themes as in his longer works,...read more »

Dostoyevsky’s towering reputation as one of the handful of thinkers who forged the modern sensibility has sometimes obscured the purely novelistic virtu...read more »

In this dark and compelling short novel, Fyodor Dostoevsky tells the story of Alexey Ivanovitch, a young tutor working in the household of an imperious ...read more »

The Grand Inquisitor is a section from The Brothers Karamazov, which is a literary work by Russian author/philosopher Fyodor Dostoevsky. The central cha...read more »

The House of the Dead is a fictionalized memoir of a man serving a ten-year prison sentence for murdering his wife. Dostoyevsky drew heavily from his ow...read more »

The twenty-six-year-old Prince Myshkin, following a stay of several years in a Swiss sanatorium, returns to Russia to collect an inheritance and be amon...read more »

In the stories in this volume Dostoevsky explores both the figure of the dreamer divorced from reality and also his own ambiguous attitude to utopianism...read more »