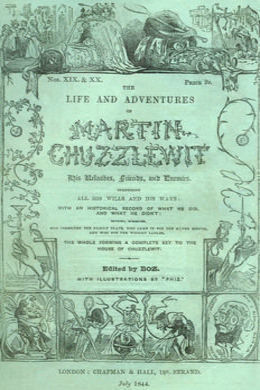 The Life and Adventures of...

Dickens turns his satirical eye on America in “Martin Chuzzlewit”, when young Martin embarks on a voyage that is destined to affect the fortunes of his family and his love. A story about the contrasting destinies of two descendants of the brothers Chuzzlewit, both born and bred to the same heritage of selfishness - Martin, by good fortune escapes and Jonas, fatally, does not. This comic masterpiece is the last of Dickens’ picaresque novels and introduces one of his greatest villains, Seth Pecksniff.

As no lady or gentleman, with any claims to polite breeding, can possibly sympathize with the Chuzzlewit Family without being first assured of the extreme antiquity of the race, it is a great satisfaction to know that it undoubtedly descended in a direct line from Adam and Eve; and was, in the very earliest times, closely connected with the agricultural interest. If it should ever be urged by grudging and malicious persons, that a Chuzzlewit, in any period of the family history, displayed an overweening amount of family pride, surely the weakness will be considered not only pardonable but laudable, when the immense superiority of the house to the rest of mankind, in respect of this its ancient origin, is taken into account.

It is remarkable that as there was, in the oldest family of which we have any record, a murderer and a vagabond, so we never fail to meet, in the records of all old families, with innumerable repetitions of the same phase of character. Indeed, it may be laid down as a general principle, that the more extended the ancestry, the greater the amount of violence and vagabondism; for in ancient days those two amusements, combining a wholesome excitement with a promising means of repairing shattered fortunes, were at once the ennobling pursuit and the healthful recreation of the Quality of this land.

Consequently, it is a source of inexpressible comfort and happiness to find, that in various periods of our history, the Chuzzlewits were actively connected with divers slaughterous conspiracies and bloody frays. It is further recorded of them, that being clad from head to heel in steel of proof, they did on many occasions lead their leather–jerkined soldiers to the death with invincible courage, and afterwards return home gracefully to their relations and friends.

There can be no doubt that at least one Chuzzlewit came over with William the Conqueror. It does not appear that this illustrious ancestor ‘came over’ that monarch, to employ the vulgar phrase, at any subsequent period; inasmuch as the Family do not seem to have been ever greatly distinguished by the possession of landed estate. And it is well known that for the bestowal of that kind of property upon his favourites, the liberality and gratitude of the Norman were as remarkable as those virtues are usually found to be in great men when they give away what belongs to other people.

Perhaps in this place the history may pause to congratulate itself upon the enormous amount of bravery, wisdom, eloquence, virtue, gentle birth, and true nobility, that appears to have come into England with the Norman Invasion: an amount which the genealogy of every ancient family lends its aid to swell, and which would beyond all question have been found to be just as great, and to the full as prolific in giving birth to long lines of chivalrous descendants, boastful of their origin, even though William the Conqueror had been William the Conquered; a change of circumstances which, it is quite certain, would have made no manner of difference in this respect.

There was unquestionably a Chuzzlewit in the Gunpowder Plot, if indeed the arch–traitor, Fawkes himself, were not a scion of this remarkable stock; as he might easily have been, supposing another Chuzzlewit to have emigrated to Spain in the previous generation, and there intermarried with a Spanish lady, by whom he had issue, one olive–complexioned son. This probable conjecture is strengthened, if not absolutely confirmed, by a fact which cannot fail to be interesting to those who are curious in tracing the progress of hereditary tastes through the lives of their unconscious inheritors. It is a notable circumstance that in these later times, many Chuzzlewits, being unsuccessful in other pursuits, have, without the smallest rational hope of enriching themselves, or any conceivable reason, set up as coal–merchants; and have, month after month, continued gloomily to watch a small stock of coals, without in any one instance negotiating with a purchaser. The remarkable similarity between this course of proceeding and that adopted by their Great Ancestor beneath the vaults of the Parliament House at Westminster, is too obvious and too full of interest, to stand in need of comment.

It is also clearly proved by the oral traditions of the Family, that there existed, at some one period of its history which is not distinctly stated, a matron of such destructive principles, and so familiarized to the use and composition of inflammatory and combustible engines, that she was called ‘The Match Maker;’ by which nickname and byword she is recognized in the Family legends to this day. Surely there can be no reasonable doubt that this was the Spanish lady, the mother of Chuzzlewit Fawkes.