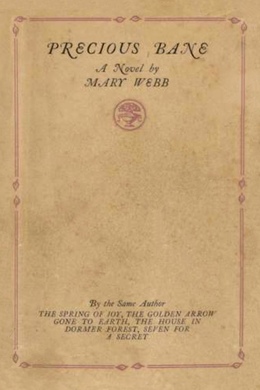 Narrated by the central character Prue Sarn, whose life is blighted by having a harelip. Only the weaver, Kester Woodseaves, perceives her inner beauty but Prue cannot believe herself worthy of him. Prue is wrongly accused of murder and only one man can save her and take her away to the happiness she believes she can never possess because of her harelip. A forgotten classic set in rural Shropshire at the turn of the 19th century blends a simple, rustic love story with a profound sense of nature’s mystic truth. Prue Sarn is an original and appealing heroine of English literature as she triumphs over a physical handicap to win her heart’s desire. Skillfully woven through this story is the aura of the English countryside, its flora and fauna anticipating every turn of the plot.

It was at a love-spinning that I saw Kester first. And if, in these new-fangled days, when strange inventions crowd upon us, when I hear tell there is even a machine coming into use in some parts of the country for reaping and mowing, if those that may happen will read this don’t know what a love-spinning was, they shall hear in good time. But though it was Jancis Beguildy’s love-spinning, she being three-and-twenty at that time and I being two years less, yet that is not the beginning of the story I have set out to tell.

Kester says that all tales, true tales or romancings, go farther back than the days of the child; aye, farther even than the little babe in its cot of rushes. Maybe you never slept in a cot of rushes; but all of us did at Sarn. There is such a plenty of rushes at Sarn, and old Beguildy’s missus was a great one for plaiting them on rounded barrel-hoops. Then they’d be set on rockers, and a nice clean cradle they made, soft and green, so that the babe could feel as big-sorted as a little caterpillar (painted butterflies-as-is-to-be, Kester calls them) sleeping in its cocoon. Kester’s very set about such things. Never will he say caterpillars. He’ll say, ‘There’s a lot of butter-flies-as-is-to-be on our cabbages, Prue.’ He won’t say ‘It’s winter.’ He’ll say, ‘Summer’s sleeping.’ And there’s no bud little enough nor sad-coloured enough for Kester not to callen it the beginnings of the blow.

But the time is not yet come for speaking of Kester. It is the story of us all at Sarn, of Mother and Gideon and me, and Jancis (that was so beautiful), and Wizard Beguildy, and the two or three other folk that lived in those parts, that I did set out to tell. There were but a few, and maybe always will be, for there’s a discouragement about the place. It may be the water lapping, year in and year out - everywhere you look and listen, water; or the big trees waiting and considering on your right hand and on your left; or the unbreathing quiet of the place, as if it was created but an hour gone, and not created for us. Or it may be that the soil is very poor and marshy, with little nature or goodness in the grass, which is ever so where reeds and rushes grow in plenty, and the flower of the paigle. Happen you call it cowslip, but we always named it the paigle, or keys of heaven. It was a wonderful thing to see our meadows at Sarn when the cowslip was in blow. Gold-over they were, so that you would think not even an angel’s feet were good enough to walk there. You could make a tossy-ball before a thrush had gone over his song twice, for you’d only got to sit down and gather with both hands. Every way you looked there was naught but gold, saving towards Sarn, where the woods began, and the great stretch of grey water, gleaming and wincing in the sun. Neither woods nor water looked darksome in that fine spring weather, with the leaves coming new, and buds the colour of corn in the birch-tops. Only in our oak wood there was always a look of the back-end of the year, their young leaves being so brown. So there was always a breath of October in our May. But it was a pleasant thing to sit in the meadows and look away to the far hills. The larches spired up in their quick green, and the cowslip gold seemed to get into your heart, and even Sarn Mere was nothing but a blue mist in a yellow mist of birch-tops. And there was such a dream on the place that if a wild bee came by, let alone a bumble, it startled you like a shout. If a bee comes in at the window now to my jar of gillyflowers, I can see it all in clear colours, with Plash lying under the sunset, beyond the woods, looking like a jagged piece of bottle glass. Plash Mere was bigger than Sarn, and there wasn’t a tree by it, so where there were no hills beyond it you could see the clouds rooted in it on the far side, and I used to think they looked like the white water-lilies that lay round the margins of Sarn half the summer through. There was nothing about plash that was different from any other lake or pool. There was no troubling of the waters, as at Sarn, nor any village sounding its bells beneath the furthest deeps. It was true, what folks said of Sarn, that there was summat to be felt there.

It was at Plash that the Beguildys lived, and it was at their dwelling, that was part stone house and part cave, that I got my book learning. It may seem a strange thing to you that a woman of my humble station should be able to write and spell, and put all these things into a book. And indeed when I was a young wench there were not many great ladies, even, that could do much more scribing than to write a love-letter, and some could but just write such things as ‘This be quince and apple’ on their jellies, and others had ado to put their names in the marriage register. Many have come to me, time and again, to write their love-letters for them, and a bitter old task it is, to write other women’s love-letters out of your own burning heart.