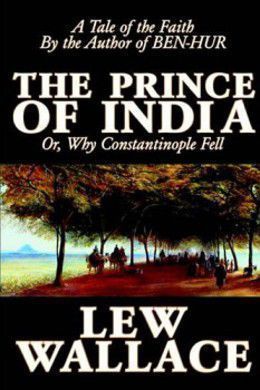 The Prince of India (Volume 2)

The final volume of Wallace’s, The Prince of India. The protagonist of this novel is “The Wandering Shoemaker” a figure from medieval Christian folklore whose legend began to spread in Europe in the 13th century. The original legend concerns a Jew who taunted Jesus on the way to the Crucifixion and was then cursed to walk the earth until the Second Coming. Wallace’ novel follows the adventures of this man through the ages, as he takes part in the shaping of history.

The sun shone clear and hot, and the guests in the garden were glad to rest in the shaded places of promenade along the brooksides and under the beeches and soaring pines of the avenues. Far up the extended hollow there was a basin first to receive the water from the conduit supposed to tap the aqueduct leading down from the forest of Belgrade. The noise of the little cataract there was strong enough to draw a quota of visitors. From the front gate to the basin, from the basin to the summit of the promontory, the company in lingering groups amused each other detailing what of fortune good and bad the year had brought them. The main features of such meetings are always alike. There were games by the children, lovers in retired places, and old people plying each other with reminiscences. The faculty of enjoyment changes but never expires.

An array of men chosen for the purpose sallied from the basement of the palace carrying baskets of bread, fruits in season, and wine of the country in water-skins. Dispersing themselves through the garden, they waited on the guests, and made distribution without stint or discrimination. The heartiness of their welcome may be imagined; while the thoughtful reader will see in the liberality thus characterizing her hospitality one of the secrets of the Princess’s popularity with the poor along the Bosphorus. Nor that merely. A little reflection will lead up to an explanation of her preference for the Homeric residence by Therapia. The commonalty, especially the unfortunate amongst them, were a kind of constituency of hers, and she loved living where she could most readily communicate with them.

This was the hour she chose to go out and personally visit her guests. Descending from the portico, she led her household attendants into the garden. She alone appeared unveiled. The happiness of the many amongst whom she immediately stepped touched every spring of enjoyment in her being; her eyes were bright, her cheeks rosy, her spirit high; in a word, the beauty so peculiarly hers, and which no one could look on without consciousness of its influence, shone with singular enhancement.

News that she was in the garden spread rapidly, and where she went everyone arose and remained standing. Now and then, while making acknowledgments to groups along the way, she recognized acquaintances, and for such, whether men or women, she had a smile, sometimes a word. Upon her passing, they pursued with benisons, “God bless you!” “May the Holy Mother keep her!” Not unfrequently children ran flinging flowers at her feet, and mothers knelt and begged her blessing. They had lively recollection of a sickness or other overtaking by sorrow, and of her boat drawing to the landing laden with delicacies, and bringing what was quite as welcome, the charm of her presence, with words inspiring hope and trust. The vast, vociferous, premeditated Roman ovation, sonorously the Triumph, never brought a Consular hero the satisfaction this Christian woman now derived.

She was aware of the admiration which went with her, and the sensation was of walking through a purer and brighter sunshine. Nor did she affect to put aside the triumph there certainly was in the demonstration; but she accounted it the due of charity–a triumph of good work done for the pleasure there was in the doing.

At the basin mentioned as the landward terminus of the garden the progress in that direction stopped. Thence, after gracious attentions to the women and children there, the Princess set out for the summit of the promontory. The road taken was broad and smooth, and on the left hand lined from bottom to top with pine trees, some of which are yet standing.

The summit had been a place of interest time out of mind. From its woody cover, the first inhabitants beheld the Argonauts anchor off the town of Amycus, king of the Bebryces; there the vengeful Medea practised her incantations; and descending to acknowledged history, it were long telling the notable events of the ages landmarked by the hoary height. When the builder of the palace below threw his scheme of improvement over the brow of the hill, he constructed water basins on different levels, surrounding them with raised walls artistically sculptured; between the basins he pitched marble pavilions, looking in the distance like airy domes on a Cyclopean temple; then he drew the work together by a tessellated pavement identical with the floor of the house of Caesar hard by the Forum in Rome.