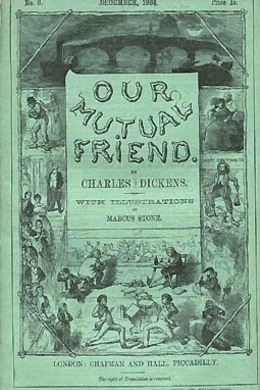 Our Mutual Friend, Dickens’ last complete novel, gives one of his most comprehensive and penetrating accounts of Victorian society. Its vision of a culture stifled by materialistic values emerges not just through its central narratives, but through its apparently incidental characters and scenes. The chief of its several plots centres on John Harmon who returns to England as his father’s heir. He is believed drowned under suspicious circumstances - a situation convenient to his wish for anonymity until he can evaluate Bella Wilfer whom he must marry to secure his inheritance. The story is filled with colourful characters and incidents - the faded aristocrats and parvenus gathered at the Veneering’s dinner table, Betty Higden and her terror of the workhouse and the greedy plottings of Silas Wegg.

In these times of ours, though concerning the exact year there is no need to be precise, a boat of dirty and disreputable appearance, with two figures in it, floated on the Thames, between Southwark bridge which is of iron, and London Bridge which is of stone, as an autumn evening was closing in.

The figures in this boat were those of a strong man with ragged grizzled hair and a sun-browned face, and a dark girl of nineteen or twenty, sufficiently like him to be recognizable as his daughter. The girl rowed, pulling a pair of sculls very easily; the man, with the rudder-lines slack in his hands, and his hands loose in his waistband, kept an eager look out. He had no net, hook, or line, and he could not be a fisherman; his boat had no cushion for a sitter, no paint, no inscription, no appliance beyond a rusty boathook and a coil of rope, and he could not be a waterman; his boat was too crazy and too small to take in cargo for delivery, and he could not be a lighterman or river-carrier; there was no clue to what he looked for, but he looked for something, with a most intent and searching gaze. The tide, which had turned an hour before, was running down, and his eyes watched every little race and eddy in its broad sweep, as the boat made slight head-way against it, or drove stern foremost before it, according as he directed his daughter by a movement of his head. She watched his face as earnestly as he watched the river. But, in the intensity of her look there was a touch of dread or horror.

Allied to the bottom of the river rather than the surface, by reason of the slime and ooze with which it was covered, and its sodden state, this boat and the two figures in it obviously were doing something that they often did, and were seeking what they often sought. Half savage as the man showed, with no covering on his matted head, with his brown arms bare to between the elbow and the shoulder, with the loose knot of a looser kerchief lying low on his bare breast in a wilderness of beard and whisker, with such dress as he wore seeming to be made out of the mud that begrimed his boat, still there was a business-like usage in his steady gaze. So with every lithe action of the girl, with every turn of her wrist, perhaps most of all with her look of dread or horror; they were things of usage.

‘Keep her out, Lizzie. Tide runs strong here. Keep her well afore the sweep of it.’

Trusting to the girl’s skill and making no use of the rudder, he eyed the coming tide with an absorbed attention. So the girl eyed him. But, it happened now, that a slant of light from the setting sun glanced into the bottom of the boat, and, touching a rotten stain there which bore some resemblance to the outline of a muffled human form, coloured it as though with diluted blood. This caught the girl’s eye, and she shivered.

‘What ails you?’ said the man, immediately aware of it, though so intent on the advancing waters; ‘I see nothing afloat.’

The red light was gone, the shudder was gone, and his gaze, which had come back to the boat for a moment, travelled away again. Wheresoever the strong tide met with an impediment, his gaze paused for an instant. At every mooring-chain and rope, at every stationery boat or barge that split the current into a broad-arrowhead, at the offsets from the piers of Southwark Bridge, at the paddles of the river steamboats as they beat the filthy water, at the floating logs of timber lashed together lying off certain wharves, his shining eyes darted a hungry look. After a darkening hour or so, suddenly the rudder-lines tightened in his hold, and he steered hard towards the Surrey shore.

Always watching his face, the girl instantly answered to the action in her sculling; presently the boat swung round, quivered as from a sudden jerk, and the upper half of the man was stretched out over the stern.

The girl pulled the hood of a cloak she wore, over her head and over her face, and, looking backward so that the front folds of this hood were turned down the river, kept the boat in that direction going before the tide. Until now, the boat had barely held her own, and had hovered about one spot; but now, the banks changed swiftly, and the deepening shadows and the kindling lights of London Bridge were passed, and the tiers of shipping lay on either hand.

The girl turned her face towards him with a start, and rowed in silence. Her face was very pale. He was a hook-nosed man, and with that and his bright eyes and his ruffled head, bore a certain likeness to a roused bird of prey.