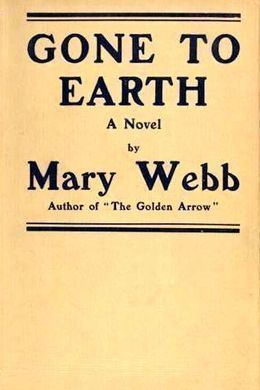 The daughter of a Welsh gypsy and a crazy bee-keeper, Hazel Woodus is happiest living in her forest cottage in the remote Shropshire hills, at one with the winds and seasons, protector and friend of the wild animals she loves. But Hazel’s beauty and innocence prove irresistible to the men in her orbit. Both Jack Reddin, the local squire and Edward Marston, the gentle minister, offer her human – and carnal – love. Hazel’s fate unfolds as simply and relentlessly as a Greek tragedy as a child of nature is drawn into a world of mortal passion in which she must eternally be a stranger.

Small feckless clouds were hurried across the vast untroubled sky–shepherdless, futile, imponderable–and were torn to fragments on the fangs of the mountains, so ending their ephemeral adventures with nothing of their fugitive existence left but a few tears.

It was cold in the Callow–a spinney of silver birches and larches that topped a round hill. A purple mist hinted of buds in the tree-tops, and a fainter purple haunted the vistas between the silver and brown boles.

Only the crudeness of youth was here as yet, and not its triumph–only the sharp calyx-point, the pricking tip of the bud, like spears, and not the paten of the leaf, the chalice of the flower.

For as yet spring had no flight, no song, but went like a half-fledged bird, hopping tentatively through the undergrowth. The bright springing mercury that carpeted the open spaces had only just hung out its pale flowers, and honeysuckle leaves were still tongues of green fire. Between the larch boles and under the thickets of honeysuckle and blackberry came a tawny silent form, wearing with the calm dignity of woodland creatures a beauty of eye and limb, a brilliance of tint, that few-women could have worn without self-consciousness. Clear-eyed, lithe, it stood for a moment in the full sunlight–a year-old fox, round-headed and velvet-footed. Then it slid into the shadows. A shrill whistle came from the interior of the wood, and the fox bounded towards it.

‘Where you bin? You’m stray and lose yourself, certain sure!’ said a girl’s voice, chidingly motherly. ‘And if you’m alost, I’m alost; so come you whome. The sun’s undering, and there’s bones for supper!’

With that she took to her heels, the little fox after her, racing down the Callow in the cold level light till they came to the Woodus’s cottage.

Hazel Woodus, to whom the fox belonged, had always lived at the Callow. There her mother, a Welsh gipsy, had born her in bitter rebellion, hating marriage and a settled life and Abel Woodus as a wild cat hates a cage. She was a rover, born for the artist’s joy and sorrow, and her spirit found no relief for its emotions; for it was dumb. To the linnet its flight, to the thrush its song; but she had neither flight nor song. Yet the tongueless thrush is a thrush still, and has golden music in its heart. The caged linnet may sit moping, but her soul knows the dip and rise of flight on an everlasting May morning.

All the things she felt and could not say, all the stored honey, the black hatred, the wistful homesickness for the unfenced wild–all that other women would have put into their prayers, she gave to Hazel. The whole force of her wayward heart flowed into the softly beating heart of her baby. It was as if she passionately flung the life she did not value into the arms of her child.

When Hazel was fourteen she died, leaving her treasure–an old, dirty, partially illegible manuscript-book of spells and charms and other gipsy lore–to her daughter.

Her one request was that she might be buried in the Callow under the yellow larch needles, and not in a churchyard. Abel Woodus did as she asked, and was regarded askance by most of the community for not burying her in Chrissen-ground. But this did not trouble him. He had his harp still, and while he had that he needed no other friend. It had been his absorption in his music that had prevented him understanding his wife, and in the early days of their marriage she had been wildly jealous of the tall gilt harp with its faded felt cover that stood in the corner of the living-room. Then her jealousy changed to love of it, and her one desire was to be able to draw music from its plaintive strings. She could never master even the rudiments of music, but she would sit on rainy evenings when Abel was away and run her thin hands over the strings with a despairing passion of grieving love. Yet she could not bear to hear Abel play. Just as some childless women with all their accumulated stores of love cannot bear to see a mother with her child, so Maray Woodus, with her sealed genius, her incapacity for expression, could not bear to hear the easy self-expression of another. For Abel was in his way a master of his art; he had dark places in his soul, and that is the very core of art and its substance. He had the lissom hands and cheerful self-absorption that bring success.