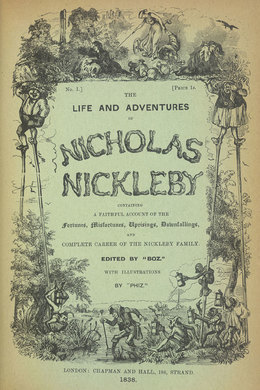 Nicholas Nickleby was hailed as a comic triumph and firmly established Dickens as a ‘literary gentleman’. It has a full supporting cast of delectable characters that range from the iniquitous Wackford Squeers and his family, to the delightful Mrs Nickleby, taking in the eccentric Crummles and his travelling players, the Mantalinis, the Kenwigs and many more. Combining these with typically Dickensian elements of burlesque and farce, the novel is eminently suited to dramatic adaptation. So great was the impact as it left Dickens’ pen that many pirated versions appeared in print before the original was even finished. Often neglected by critics, Nicholas Nickleby has never ceased to delight readers and is widely regarded as one of the greatest comic masterpieces of nineteenth-centure literature.

There once lived, in a sequestered part of the county of Devonshire, one Mr Godfrey Nickleby: a worthy gentleman, who, taking it into his head rather late in life that he must get married, and not being young enough or rich enough to aspire to the hand of a lady of fortune, had wedded an old flame out of mere attachment, who in her turn had taken him for the same reason. Thus two people who cannot afford to play cards for money, sometimes sit down to a quiet game for love.

Some ill-conditioned persons who sneer at the life-matrimonial, may perhaps suggest, in this place, that the good couple would be better likened to two principals in a sparring match, who, when fortune is low and backers scarce, will chivalrously set to, for the mere pleasure of the buffeting; and in one respect indeed this comparison would hold good; for, as the adventurous pair of the Fives’ Court will afterwards send round a hat, and trust to the bounty of the lookers-on for the means of regaling themselves, so Mr Godfrey Nickleby and HIS partner, the honeymoon being over, looked out wistfully into the world, relying in no inconsiderable degree upon chance for the improvement of their means. Mr Nickleby’s income, at the period of his marriage, fluctuated between sixty and eighty pounds PER ANNUM.

There are people enough in the world, Heaven knows! and even in London (where Mr Nickleby dwelt in those days) but few complaints prevail, of the population being scanty. It is extraordinary how long a man may look among the crowd without discovering the face of a friend, but it is no less true. Mr Nickleby looked, and looked, till his eyes became sore as his heart, but no friend appeared; and when, growing tired of the search, he turned his eyes homeward, he saw very little there to relieve his weary vision. A painter who has gazed too long upon some glaring colour, refreshes his dazzled sight by looking upon a darker and more sombre tint; but everything that met Mr Nickleby’s gaze wore so black and gloomy a hue, that he would have been beyond description refreshed by the very reverse of the contrast.

At length, after five years, when Mrs Nickleby had presented her husband with a couple of sons, and that embarrassed gentleman, impressed with the necessity of making some provision for his family, was seriously revolving in his mind a little commercial speculation of insuring his life next quarter-day, and then falling from the top of the Monument by accident, there came, one morning, by the general post, a black-bordered letter to inform him how his uncle, Mr Ralph Nickleby, was dead, and had left him the bulk of his little property, amounting in all to five thousand pounds sterling.

As the deceased had taken no further notice of his nephew in his lifetime, than sending to his eldest boy (who had been christened after him, on desperate speculation) a silver spoon in a morocco case, which, as he had not too much to eat with it, seemed a kind of satire upon his having been born without that useful article of plate in his mouth, Mr Godfrey Nickleby could, at first, scarcely believe the tidings thus conveyed to him. On examination, however, they turned out to be strictly correct. The amiable old gentleman, it seemed, had intended to leave the whole to the Royal Humane Society, and had indeed executed a will to that effect; but the Institution, having been unfortunate enough, a few months before, to save the life of a poor relation to whom he paid a weekly allowance of three shillings and sixpence, he had, in a fit of very natural exasperation, revoked the bequest in a codicil, and left it all to Mr Godfrey Nickleby; with a special mention of his indignation, not only against the society for saving the poor relation’s life, but against the poor relation also, for allowing himself to be saved.

With a portion of this property Mr Godfrey Nickleby purchased a small farm, near Dawlish in Devonshire, whither he retired with his wife and two children, to live upon the best interest he could get for the rest of his money, and the little produce he could raise from his land. The two prospered so well together that, when he died, some fifteen years after this period, and some five after his wife, he was enabled to leave, to his eldest son, Ralph, three thousand pounds in cash, and to his youngest son, Nicholas, one thousand and the farm, which was as small a landed estate as one would desire to see.