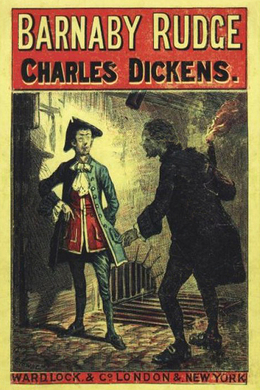 A Tale of the Riots of 'Eighty

Set against the backdrop of the Gordon Riots of 1780, Barnaby Rudge is a story of mystery and suspense which begins with an unsolved double murder and goes on to involve conspiracy, blackmail, abduction and retribution. Through the course of the novel fathers and sons become opposed, apprentices plot against their masters and Protestants clash with Catholics on the streets. And, as London erupts into riot, Barnaby Rudge himself struggles to escape the curse of his own past. With its dramatic descriptions of public violence and private horror, its strange secrets and ghostly doublings, Barnaby Rudge is a powerful, disturbing blend of historical realism and Gothic melodrama.

In the year 1775, there stood upon the borders of Epping Forest, at a distance of about twelve miles from London–measuring from the Standard in Cornhill,’ or rather from the spot on or near to which the Standard used to be in days of yore–a house of public entertainment called the Maypole; which fact was demonstrated to all such travellers as could neither read nor write (and at that time a vast number both of travellers and stay-at-homes were in this condition) by the emblem reared on the roadside over against the house, which, if not of those goodly proportions that Maypoles were wont to present in olden times, was a fair young ash, thirty feet in height, and straight as any arrow that ever English yeoman drew.

The Maypole–by which term from henceforth is meant the house, and not its sign–the Maypole was an old building, with more gable ends than a lazy man would care to count on a sunny day; huge zig-zag chimneys, out of which it seemed as though even smoke could not choose but come in more than naturally fantastic shapes, imparted to it in its tortuous progress; and vast stables, gloomy, ruinous, and empty. The place was said to have been built in the days of King Henry the Eighth; and there was a legend, not only that Queen Elizabeth had slept there one night while upon a hunting excursion, to wit, in a certain oak-panelled room with a deep bay window, but that next morning, while standing on a mounting block before the door with one foot in the stirrup, the virgin monarch had then and there boxed and cuffed an unlucky page for some neglect of duty. The matter-of-fact and doubtful folks, of whom there were a few among the Maypole customers, as unluckily there always are in every little community, were inclined to look upon this tradition as rather apocryphal; but, whenever the landlord of that ancient hostelry appealed to the mounting block itself as evidence, and triumphantly pointed out that there it stood in the same place to that very day, the doubters never failed to be put down by a large majority, and all true believers exulted as in a victory.

Whether these, and many other stories of the like nature, were true or untrue, the Maypole was really an old house, a very old house, perhaps as old as it claimed to be, and perhaps older, which will sometimes happen with houses of an uncertain, as with ladies of a certain, age. Its windows were old diamond-pane lattices, its floors were sunken and uneven, its ceilings blackened by the hand of time, and heavy with massive beams. Over the doorway was an ancient porch, quaintly and grotesquely carved; and here on summer evenings the more favoured customers smoked and drank–ay, and sang many a good song too, sometimes–reposing on two grim-looking high-backed settles, which, like the twin dragons of some fairy tale, guarded the entrance to the mansion.

In the chimneys of the disused rooms, swallows had built their nests for many a long year, and from earliest spring to latest autumn whole colonies of sparrows chirped and twittered in the eaves. There were more pigeons about the dreary stable-yard and out-buildings than anybody but the landlord could reckon up. The wheeling and circling flights of runts, fantails, tumblers, and pouters, were perhaps not quite consistent with the grave and sober character of the building, but the monotonous cooing, which never ceased to be raised by some among them all day long, suited it exactly, and seemed to lull it to rest. With its overhanging stories, drowsy little panes of glass, and front bulging out and projecting over the pathway, the old house looked as if it were nodding in its sleep. Indeed, it needed no very great stretch of fancy to detect in it other resemblances to humanity. The bricks of which it was built had originally been a deep dark red, but had grown yellow and discoloured like an old man’s skin; the sturdy timbers had decayed like teeth; and here and there the ivy, like a warm garment to comfort it in its age, wrapt its green leaves closely round the time-worn walls.

It was a hale and hearty age though, still: and in the summer or autumn evenings, when the glow of the setting sun fell upon the oak and chestnut trees of the adjacent forest, the old house, partaking of its lustre, seemed their fit companion, and to have many good years of life in him yet.