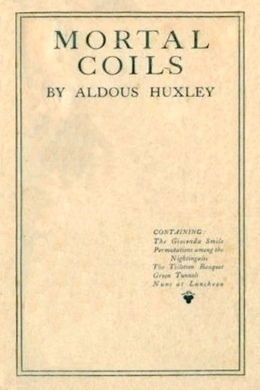 “Miss Spence will be down directly, sir.”

“Thank you,” said Mr. Hutton, without turning round. Janet Spence’s parlourmaid was so ugly–ugly on purpose, it always seemed to him, malignantly, criminally ugly–that he could not bear to look at her more than was necessary. The door closed. Left to himself, Mr. Hutton got up and began to wander round the room, looking with meditative eyes at the familiar objects it contained.

Photographs of Greek statuary, photographs of the Roman Forum, coloured prints of Italian masterpieces, all very safe and well known. Poor, dear Janet, what a prig–what an intellectual snob! Her real taste was illustrated in that water-colour by the pavement artist, the one she had paid half a crown for (and thirty-five shillings for the frame). How often his had heard her tell the story, how often expatiate on the beauties of that skilful imitation of an oleograph! “A real Artist in the streets,” and you could hear the capital A in Artist as she spoke the words. She made you feel that part of his glory had entered into Janet Spence when she tendered him that half-crown for the copy of the oleograph. She was implying a compliment to her own taste and penetration. A genuine Old Master for half a crown. Poor, dear Janet!

Mr. Hutton came to a pause in front of a small oblong mirror. Stooping a little to get a full view of his face, he passed a white, well-manicured finger over his moustache. It was as curly, as freshly auburn as it had been twenty years ago. His hair still retained its colour, and there was no sign of baldness yet–only a certain elevation of the brow. “Shakespearean,” thought Mr. Hutton, with a smile, as he surveyed the smooth and polished expanse of his forehead.

Others abide our question, thou art free…. Footsteps in the sea … Majesty … Shakespeare, thou shouldst be living at this hour. No, that was Milton, wasn’t it? Milton, the Lady of Christ’s. There was no lady about him. He was what the women, would call a manly man. That was why they liked him–for the curly auburn moustache and the discreet redolence of tobacco. Mr. Hutton smiled again; he enjoyed making fun of himself. Lady of Christ’s? No, no. He was the Christ of Ladies. Very pretty, very pretty. The Christ of Ladies. Mr. Hutton wished there were somebody he could tell the joke to. Poor, dear Janet wouldn’t appreciate it, alas?

He straightened himself up, patted his hair, and resumed his peregrination. Damn the Roman Forum; he hated those dreary photographs.

Suddenly he became aware that Janet Spence was in the room, standing near the door. Mr. Hutton started, as though he had been taken in some felonious act. To make these silent and spectral appearances was one of Janet Spence’s peculiar talents. Perhaps she had been there all the time, had seen him looking at himself in the mirror. Impossible! But, still, it was disquieting.

“Oh, you gave me such a surprise,” said Mr. Hutton, recovering his smile and advancing with outstretched hand to meet her.

Miss Spence was smiling too: her Gioconda smile, he had once called it, in a moment of half-ironical flattery. Miss Spence had taken the compliment seriously, and had always tried to live up to the Leonardo standard. She smiled on his silence while Mr. Hutton shook hands; that was part of the Gioconda business.

What a queer face she had! That small mouth pursed forward by the Gioconda expression into a little snout with a round hole in the middle as though for whistling–it was like a penholder seen from the front. Above the mouth a well-shaped nose, finely aquiline. Eyes large, lustrous, and dark, with the largeness, lustre, and darkness that seems to invite sties and an occasional blood-shot suffusion. They were fine eyes, but unchangingly grave. The penholder might do its Gioconda trick, but the eyes never altered in their earnestness. Above them, a pair of boldly arched, heavily pencilled black eyebrows lent a surprising air of power, as of a Roman matron, to the upper portion of the face. Her hair was dark and equally Roman; Agrippina from the brows upward.

“I thought I’d just look in on my way home,” Mr. Hutton went on. “Ah, it’s good to be back here”–he indicated with a wave of his hand the flowers in the vases, the sunshine and greenery beyond the windows –“it’s good to be back in the country after a stuffy day of business in town.”

Miss Spence, who had sat down, pointed to a chair at her side.

“No, really, I cant sit down,” Mr. Hutton protested. “I must get back to see how poor Emily is. She was rather seedy this morning.” He sat down, nevertheless. “It’s these wretched liver chills. She’s always getting them. Women–” He broke off and coughed, so as to hide the fact that he had uttered.