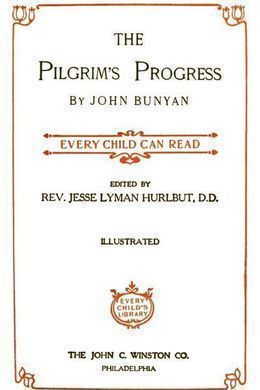 From This World to That Which Is to Come; Delivered under the Similitude of a Dream

John Bunyan was variously a tinker, soldier, Baptist minister, prisoner and writer of outstanding narrative genius which reached its apotheosis in this, his greatest work. It is an allegory of the Christian life of true brilliance and is presented as a dream which describes the pilgrimage of the hero - Christian - from the City of Destruction via the Slough of Despond, the Hill of Difficulty, the Valley of the Shadow of Death and Vanity Fair over the River of the Water of Life and into the Celestial City.

The Pilgrim’s Progress has been translated into 108 languages, was a favourite of Dr Johnson and was praised by Coleridge as one of the few books which might be read repeatedly and each time with a new and different pleasure.

As I walked through the wilderness of this world, I lighted on a certain place where was a den, and laid me down in that place to sleep; and as I slept, I dreamed a dream. I dreamed, and behold, I saw a man clothed with rags, standing in a certain place, with his face from his own house, a book in his hand, and a great burden upon his back. I looked, and saw him open the book, and read therein; and as he read, he wept and trembled; and, not being able longer to contain, he brake out with a lamentable cry, saying, “What shall I do?”

In this plight, therefore, he went home, and restrained himself as long as he could, that his wife and children should not perceive his distress; but he could not be silent long, because that his trouble increased. Wherefore at length he brake his mind to his wife and children; and thus he began to talk to them: “Oh my dear wife,” said he, “and you my sweet children, I, your dear friend, am in myself undone by reason of a burden that lieth hard upon me; moreover, I am told to a certainty that this our city will be burned with fire from heaven; in which fearful overthrow, both myself, with thee, my wife, and you, my sweet babes, shall miserably come to ruin, except some way of escape can be found whereby we may be delivered.” At this all his family were sore amazed; not for that they believed that what he had said to them was true, but because they thought that some frenzy or madness had got into his head; therefore, it drawing towards night, and they hoping that sleep might settle his brain, with all haste they got him to bed. But the night was as troublesome to him as the day; wherefore, instead of sleeping, he spent it in sighs and tears. So when the morning was come, they would know how he did. He told them, Worse and worse: he also set to talking to them again; but they began to be hardened. They also thought to drive away his madness by harsh and surly treatment of him: sometimes they would ridicule, sometimes they would chide, and sometimes they would quite neglect him. Wherefore he began to retire himself to his chamber, to pray for and pity them, and also to sorrow over his own misery; he would also walk solitary in the fields, sometimes reading, and sometimes praying; and thus for some days he spent his time.

Now, I saw, upon a time, when he was walking in the fields, that he was (as he was wont) reading in his book, and greatly distressed in his mind; and as he read, he burst out as he had done before, crying, “What shall I do to be saved?”

I saw also that he looked this way and that way, as if he would run; yet he stood still, because (as I perceived) he could not tell which way to go. I looked then, and saw a man named Evangelist coming to him, who asked, “Wherefore dost thou cry?”

He answered, “Sir, I read in the book in my hand, that I am condemned to die, and after that to come to judgment; and I find that I am not willing to do the first, nor able to do the second.”

Then said Evangelist, “Why not willing to die, since this life is troubled with so many evils?” The man answered, “Because I fear that this burden that is upon my back will sink me lower than the grave, and I shall fall into Tophet. And, sir, if I be not fit to go to prison, I am not fit to go to judgment, and from thence to death; and the thoughts of these things make me cry.”

Then said Evangelist, “If this be thy condition, why standest thou still?”

He answered, “Because I know not whither to go.” Then he gave him a parchment roll, and there was written within, “Flee from the wrath to come.”

The man, therefore, read it, and looking upon Evangelist very carefully, said, “Whither must I fly?” Then said Evangelist (pointing with his finger over a very wide field), “Do you see yonder wicket-gate?” The man said, “No.” Then said the other, “Do you see yonder shining light?” He said, “I think I do.” Then said Evangelist, “Keep that light in your eye, and go up directly thereto; so shalt thou see the gate; at which, when thou knockest, it shall be told thee what thou shalt do.” So I saw in my dream that the man began to run. Now, he had not run far from his own door, when his wife and children perceiving it, began to cry after him to return; but the man put his fingers in his ears, and ran on, crying, “Life! life! eternal life!” So he looked not behind him, but fled towards the middle of the plain.