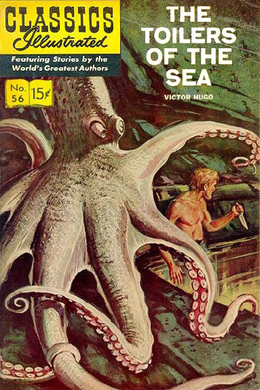 Toilers of the Sea

Hugo’s story unfolds the life of a reclusive fisherman, Gilliat, who lives on the Isle of Guernsey, where Hugo himself was exiled for a large portion of his life. When Gilliat becomes a young man, he falls in love with Déruchette, the beautiful niece of wealthy ship-owner Lethierry. When Lethierry’s steamship mysteriously runs aground, Déruchette, who is in love with the new rector of the island, offers to marry the man who can recover the ‘Durande’. Gilliat sets off at once to free the ship, and his feats of ingenuity and strength create some of the most memorable descriptions to be found in a romantic novel. Although the least known of Hugo’s masterpieces, this deliberately grandiose tale is by turns a sympathetic, richly detailed account of the hard work of seamanship and exhilarating action, as in the remarkable battle with the octopus. This irresistible novel, written with Hugo’s considerable narrative skill, is both captivating and haunting to its ironic conclusion.

Christmas Day in the year 182- was somewhat remarkable in the island of Guernsey. Snow fell on that day. In the Channel Islands a frosty winter is uncommon, and a fall of snow is an event.

On that Christmas morning, the road which skirts the seashore from St. Peter’s Port to the Vale was clothed in white. From midnight till the break of day the snow had been falling. Towards nine o’clock, a little after the rising of the wintry sun, as it was too early yet for the Church of England folks to go to St. Sampson’s, or for the Wesleyans to repair to Eldad Chapel, the road was almost deserted. Throughout that portion of the highway which separates the first from the second tower, only three foot-passengers could be seen. These were a child, a man, and a woman. Walking at a distance from each other, these wayfarers had no visible connection. The child, a boy of about eight years old, had stopped, and was looking curiously at the wintry scene. The man walked behind the woman, at a distance of about a hundred paces. Like her he was coming from the direction of the church of St. Sampson. The appearance of the man, who was still young, was something between that of a workman and a sailor. He wore his working-day clothes–a kind of Guernsey shirt of coarse brown stuff, and trousers partly concealed by tarpaulin leggings–a costume which seemed to indicate that, notwithstanding the holy day, he was going to no place of worship. His heavy shoes of rough leather, with their soles covered with large nails, left upon the snow, as he walked, a print more like that of a prison lock than the foot of a man. The woman, on the contrary, was evidently dressed for church. She wore a large mantle of black silk, wadded, under which she had coquettishly adjusted a dress of Irish poplin, trimmed alternately with white and pink; but for her red stockings, she might have been taken for a Parisian. She walked on with a light and free step, so little suggestive of the burden of life that it might easily be seen that she was young. Her movements possessed that subtle grace which indicates the most delicate of all transitions–that soft intermingling, as it were, of two twilights–the passage from the condition of a child to that of womanhood. The man seemed to take no heed of her.

Suddenly, near a group of oaks at the corner of a field, and at the spot called the Basses Maisons, she turned, and the movement seemed to attract the attention of the man. She stopped, seemed to reflect a moment, then stooped, and the man fancied that he could discern that she was tracing with her finger some letters in the snow. Then she rose again, went on her way at a quicker pace, turned once more, this time smiling, and disappeared to the left of the roadway, by the footpath under the hedges which leads to the Ivy Castle. When she had turned for the second time, the man had recognised her as Déruchette, a charming girl of that neighbourhood.

The man felt no need of quickening his pace; and some minutes later he found himself near the group of oaks. Already he had ceased to think of the vanished Déruchette; and if, at that moment, a porpoise had appeared above the water, or a robin had caught his eye in the hedges, it is probable that he would have passed on his way. But it happened that his eyes were fixed upon the ground; his gaze fell mechanically upon the spot where the girl had stopped. Two little footprints were there plainly visible; and beside them he read this word, evidently written by her in the snow–

It was his own name.

He lingered for awhile motionless, looking at the letters, the little footprints, and the snow; and then walked on, evidently in a thoughtful mood.

Gilliatt lived in the parish of St. Sampson. He was not liked by his neighbours; and there were reasons for that fact.

To begin with, he lived in a queer kind of “haunted” dwelling. In the islands of Jersey and Guernsey, sometimes in the country, but often in streets with many inhabitants, you will come upon a house the entrance to which is completely barricaded. Holly bushes obstruct the doorway, hideous boards, with nails, conceal the windows below; while the casements of the upper stories are neither closed nor open: for all the window-frames are barred, but the glass is broken. If there is a little yard, grass grows between its stones; and the parapet of its wall is crumbling away. If there is a garden, it is choked with nettles, brambles, and hemlock, and strange insects abound in it. The chimneys are cracked, the roof is falling in; so much as can be seen from without of the rooms presents a dismantled appearance. The woodwork is rotten; the stone mildewed.