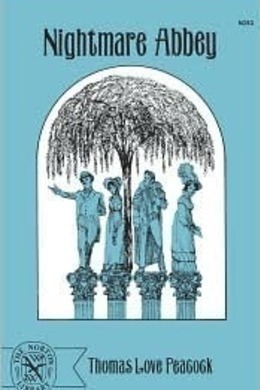 Set in a former abbey whose owner, Christopher Glowry, is host to visitors who enjoy his hospitality and engage in endless debate. Among these guests are figures recognizable to Peacock’s contemporaries, including characters based on Lord Byron and Samuel Taylor Coleridge. Mr. Glowry’s son Scythrop (also modeled on a famous Romantic, Peacock’s friend Percy Bysshe Shelley) locks himself up in a tower where he reads German tragedies and transcendental philosophy and develops a “passion for reforming the world.” Disappointed in love, a sorrowful Scythrop decides the only thing to do is to commit suicide, but circumstances persuade him to instead follow his father in a love of misanthropy and Madeira.

Nightmare Abbey, a venerable family-mansion, in a highly picturesque state of semi-dilapidation, pleasantly situated on a strip of dry land between the sea and the fens, at the verge of the county of Lincoln, had the honour to be the seat of Christopher Glowry, Esquire. This gentleman was naturally of an atrabilarious temperament, and much troubled with those phantoms of indigestion which are commonly called blue devils. He had been deceived in an early friendship: he had been crossed in love; and had offered his hand, from pique, to a lady, who accepted it from interest, and who, in so doing, violently tore asunder the bonds of a tried and youthful attachment. Her vanity was gratified by being the mistress of a very extensive, if not very lively, establishment; but all the springs of her sympathies were frozen. Riches she possessed, but that which enriches them, the participation of affection, was wanting. All that they could purchase for her became indifferent to her, because that which they could not purchase, and which was more valuable than themselves, she had, for their sake, thrown away. She discovered, when it was too late, that she had mistaken the means for the end–that riches, rightly used, are instruments of happiness, but are not in themselves happiness. In this wilful blight of her affections, she found them valueless as means: they had been the end to which she had immolated all her affections, and were now the only end that remained to her. She did not confess this to herself as a principle of action, but it operated through the medium of unconscious self-deception, and terminated in inveterate avarice. She laid on external things the blame of her mind’s internal disorder, and thus became by degrees an accomplished scold. She often went her daily rounds through a series of deserted apartments, every creature in the house vanishing at the creak of her shoe, much more at the sound of her voice, to which the nature of things affords no simile; for, as far as the voice of woman, when attuned by gentleness and love, transcends all other sounds in harmony, so far does it surpass all others in discord, when stretched into unnatural shrillness by anger and impatience.

Mr Glowry used to say that his house was no better than a spacious kennel, for every one in it led the life of a dog. Disappointed both in love and in friendship, and looking upon human learning as vanity, he had come to a conclusion that there was but one good thing in the world, videlicet, a good dinner; and this his parsimonious lady seldom suffered him to enjoy: but, one morning, like Sir Leoline in Christabel, ‘he woke and found his lady dead,’ and remained a very consolate widower, with one small child.

This only son and heir Mr Glowry had christened Scythrop, from the name of a maternal ancestor, who had hanged himself one rainy day in a fit of toedium vitae, and had been eulogised by a coroner’s jury in the comprehensive phrase of felo de se; on which account, Mr Glowry held his memory in high honour, and made a punchbowl of his skull.

When Scythrop grew up, he was sent, as usual, to a public school, where a little learning was painfully beaten into him, and from thence to the university, where it was carefully taken out of him; and he was sent home like a well-threshed ear of corn, with nothing in his head: having finished his education to the high satisfaction of the master and fellows of his college, who had, in testimony of their approbation, presented him with a silver fish-slice, on which his name figured at the head of a laudatory inscription in some semi-barbarous dialect of Anglo-Saxonised Latin.

His fellow-students, however, who drove tandem and random in great perfection, and were connoisseurs in good inns, had taught him to drink deep ere he departed. He had passed much of his time with these choice spirits, and had seen the rays of the midnight lamp tremble on many a lengthening file of empty bottles. He passed his vacations sometimes at Nightmare Abbey, sometimes in London, at the house of his uncle, Mr Hilary, a very cheerful and elastic gentleman, who had married the sister of the melancholy Mr Glowry. The company that frequented his house was the gayest of the gay. Scythrop danced with the ladies and drank with the gentlemen, and was pronounced by both a very accomplished charming fellow, and an honour to the university.

At the house of Mr Hilary, Scythrop first saw the beautiful Miss Emily Girouette. He fell in love; which is nothing new. He was favourably received; which is nothing strange. Mr Glowry and Mr Girouette had a meeting on the occasion, and quarrelled about the terms of the bargain; which is neither new nor strange. The lovers were torn asunder, weeping and vowing everlasting constancy; and, in three weeks after this tragical event, the lady was led a smiling bride to the altar, by the Honourable Mr Lackwit; which is neither strange nor new.