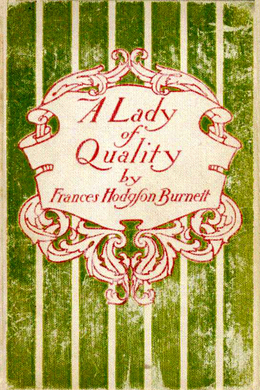 A Lady of Quality

Being A Most Curious, Hitherto Unknown History, As Related To Mr. Isaac Bickerstaff But Not Presented To the World of Fashion … and Now for the First Time Written Down by Frances Hodgson Burnett - the first of series of successful historical novels by Burnett.

On a wintry morning at the close of 1690, the sun shining faint and red through a light fog, there was a great noise of baying dogs, loud voices, and trampling of horses in the courtyard at Wildairs Hall; Sir Jeoffry being about to go forth a-hunting, and being a man with a choleric temper and big, loud voice, and given to oaths and noise even when in good-humour, his riding forth with his friends at any time was attended with boisterous commotion. This morning it was more so than usual, for he had guests with him who had come to his house the day before, and had supped late and drunk deeply, whereby the day found them, some with headaches, some with a nausea at their stomachs, and some only in an evil humour which made them curse at their horses when they were restless, and break into loud surly laughs when a coarse joke was made. There were many such jokes, Sir Jeoffry and his boon companions being renowned throughout the county for the freedom of their conversation as for the scandal of their pastimes, and this day ‘twas well indeed, as their loud- voiced, oath-besprinkled jests rang out on the cold air, that there were no ladies about to ride forth with them.

‘Twas Sir Jeoffry who was louder than any other, he having drunk even deeper than the rest, and though ‘twas his boast that he could carry a bottle more than any man, and see all his guests under the table, his last night’s bout had left him in ill-humour and boisterous. He strode about, casting oaths at the dogs and rating the servants, and when he mounted his big black horse ‘twas amid such a clamour of voices and baying hounds that the place was like Pandemonium.

He was a large man of florid good looks, black eyes, and full habit of body, and had been much renowned in his youth for his great strength, which was indeed almost that of a giant, and for his deeds of prowess in the saddle and at the table when the bottle went round. There were many evil stories of his roysterings, but it was not his way to think of them as evil, but rather to his credit as a man of the world, for, when he heard that they were gossiped about, he greeted the information with a loud triumphant laugh. He had married, when she was fifteen, the blooming toast of the county, for whom his passion had long died out, having indeed departed with the honeymoon, which had been of the briefest, and afterwards he having borne her a grudge for what he chose to consider her undutiful conduct. This grudge was founded on the fact that, though she had presented him each year since their marriage with a child, after nine years had passed none had yet been sons, and, as he was bitterly at odds with his next of kin, he considered each of his offspring an ill turn done him.

He spent but little time in her society, for she was a poor, gentle creature of no spirit, who found little happiness in her lot, since her lord treated her with scant civility, and her children one after another sickened and died in their infancy until but two were left. He scarce remembered her existence when he did not see her face, and he was certainly not thinking of her this morning, having other things in view, and yet it so fell out that, while a groom was shortening a stirrup and being sworn at for his awkwardness, he by accident cast his eye upward to a chamber window peering out of the thick ivy on the stone. Doing so he saw an old woman draw back the curtain and look down upon him as if searching for him with a purpose.

He uttered an exclamation of anger.

“Damnation! Mother Posset again,” he said. “What does she there, old frump?”

The curtain fell and the woman disappeared, but in a few minutes more an unheard-of thing happened–among the servants in the hall, the same old woman appeared making her way with a hurried fretfulness, and she descended haltingly the stone steps and came to his side where he sat on his black horse.

“The Devil!” he exclaimed–“what are you here for? ‘Tis not time for another wench upstairs, surely?”

“‘Tis not time,” answered the old nurse acidly, taking her tone from his own. “But there is one, but an hour old, and my lady–”

“Be damned to her!” quoth Sir Jeoffry savagely. “A ninth one–and ‘tis nine too many. ‘Tis more than man can bear. She does it but to spite me.”

“‘Tis ill treatment for a gentleman who wants an heir,” the old woman answered, as disrespectful of his spouse as he was, being a time-serving crone, and knowing that it paid but poorly to coddle women who did not as their husbands would have them in the way of offspring. “It should have been a fine boy, but it is not, and my lady–”

“She would not let me rest until I came to you,” said the nurse resentfully. “She would have you told that she felt strangely, and before you went forth would have a word with you.”