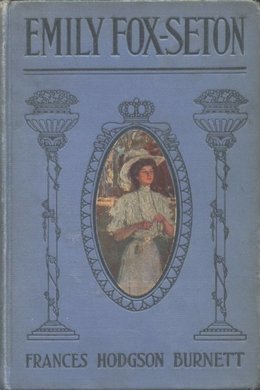 First published as The Making of a Marchioness followed by its sequel The Methods of Lady Walderhurst, the two novels were combined into Emily Fox-Seton who is the two works’ primary character. The story follows thirty-something Emily who lives alone, humbly and happily, in a tiny apartment and on a meager income. She is the one that everyone counts on but no one goes out of their way to accommodate. Her fortune changes, however, and the second half chronicles her adaptation to her new life and the dangers that arise from those who stand to lose most from her new circumstances.

When Miss Fox-Seton descended from the twopenny bus as it drew up, she gathered her trim tailor-made skirt about her with neatness and decorum, being well used to getting in and out of twopenny buses and to making her way across muddy London streets. A woman whose tailor-made suit must last two or three years soon learns how to protect it from splashes, and how to aid it to retain the freshness of its folds. During her trudging about this morning in the wet, Emily Fox-Seton had been very careful, and, in fact, was returning to Mortimer Street as unspotted as she had left it. She had been thinking a good deal about her dress–this particular faithful one which she had already worn through a twelvemonth. Skirts had made one of their appalling changes, and as she walked down Regent Street and Bond Street she had stopped at the windows of more than one shop bearing the sign “Ladies’ Tailor and Habit-Maker,” and had looked at the tautly attired, preternaturally slim models, her large, honest hazel eyes wearing an anxious expression. She was trying to discover where seams were to be placed and how gathers were to be hung; or if there were to be gathers at all; or if one had to be bereft of every seam in a style so unrelenting as to forbid the possibility of the honest and semi-penniless struggling with the problem of remodelling last season’s skirt at all. “As it is only quite an ordinary brown,” she had murmured to herself, “I might be able to buy a yard or so to match it, and I might be able to join the gore near the pleats at the back so that it would not be seen.”

She quite beamed as she reached the happy conclusion. She was such a simple, normal-minded creature that it took but little to brighten the aspect of life for her and to cause her to break into her good-natured, childlike smile. A little kindness from any one, a little pleasure or a little comfort, made her glow with nice-tempered enjoyment. As she got out of the bus, and picked up her rough brown skirt, prepared to tramp bravely through the mud of Mortimer Street to her lodgings, she was positively radiant. It was not only her smile which was childlike, her face itself was childlike for a woman of her age and size. She was thirty-four and a well-set-up creature, with fine square shoulders and a long small waist and good hips. She was a big woman, but carried herself well, and having solved the problem of obtaining, through marvels of energy and management, one good dress a year, wore it so well, and changed her old ones so dexterously, that she always looked rather smartly dressed. She had nice, round, fresh cheeks and nice, big, honest eyes, plenty of mouse-brown hair and a short, straight nose. She was striking and well-bred-looking, and her plenitude of good-natured interest in everybody, and her pleasure in everything out of which pleasure could be wrested, gave her big eyes a fresh look which made her seem rather like a nice overgrown girl than a mature woman whose life was a continuous struggle with the narrowest of mean fortunes.

She was a woman of good blood and of good education, as the education of such women goes. She had few relatives, and none of them had any intention of burdening themselves with her pennilessness. They were people of excellent family, but had quite enough to do to keep their sons in the army or navy and find husbands for their daughters. When Emily’s mother had died and her small annuity had died with her, none of them had wanted the care of a big raw-boned girl, and Emily had had the situation frankly explained to her. At eighteen she had begun to work as assistant teacher in a small school; the year following she had taken a place as nursery-governess; then she had been reading-companion to an unpleasant old woman in Northumberland. The old woman had lived in the country, and her relatives had hovered over her like vultures awaiting her decease. The household had been gloomy and gruesome enough to have driven into melancholy madness any girl not of the sanest and most matter-of-fact temperament. Emily Fox-Seton had endured it with an unfailing good nature, which at last had actually awakened in the breast of her mistress a ray of human feeling. When the old woman at length died, and Emily was to be turned out into the world, it was revealed that she had been left a legacy of a few hundred pounds, and a letter containing some rather practical, if harshly expressed, advice.

Go back to London [Mrs. Maytham had written in her feeble, crabbed hand]. You are not clever enough to do anything remarkable in the way of earning your living, but you are so good-natured that you can make yourself useful to a lot of helpless creatures who will pay you a trifle for looking after them and the affairs they are too lazy or too foolish to manage for themselves. You might get on to one of the second-class fashion-papers to answer ridiculous questions about house-keeping or wall-papers or freckles.