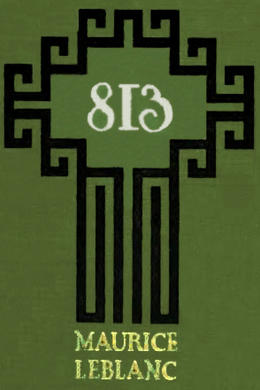 When one of Arséne Lupin’ victims is found dead in a way that implicates the wily criminal, he insists on heading the police search for the real murderer. The mystery involves finding a package of letters once written to Bismarck, locating a clock on which the number 813 has significance, as well as causing a reigning emperor to make several journeys incognito. Murders by the dozens, suicide and mild forms of torture are warp and woof of the plot.

Mr. Kesselbach stopped short on the threshold of the sitting-room, took his secretary’s arm and, in an anxious voice, whispered:

“Chapman, some one has been here again.”

“Surely not, sir,” protested the secretary. “You have just opened the hall-door yourself; and the key never left your pocket while we were lunching in the restaurant.”

“Chapman, some one has been here again,” Mr. Kesselbach repeated. He pointed to a traveling-bag on the mantelpiece. “Look, I can prove it. That bag was shut. It is now open.”

“Are you quite sure that you shut it, sir? Besides, the bag contains nothing but odds and ends of no value, articles of dress. . . .”

“It contains nothing else, because I took my pocket-book out before we went down, by way of precaution. . . . But for that. . . . No, Chapman, I tell you, some one has been here while we were at lunch.”

There was a telephone on the wall. He took down the receiver:

A moment later he continued:

Rudolf Kesselbach, nicknamed alternatively the King of Diamonds and the Lord of the Cape, possessed a fortune estimated at nearly twenty millions sterling. For the past week, he had occupied suite 415, on the fourth floor of the Palace Hotel, consisting of three rooms, of which the two larger, on the right, the sitting-room and the principal bedroom, faced the avenue; while the other, on the left, in which Chapman, the secretary, slept, looked out on the Rue de Judée.

Adjoining this bedroom, a suite of five rooms had been reserved for Mrs. Kesselbach, who was to leave Monte Carlo, where she was at present staying, and join her husband the moment she heard from him.

Rudolf Kesselbach walked up and down for a few minutes with a thoughtful air. He was a tall man, with a ruddy complexion, and still young; and his dreamy eyes, which showed pale blue through his gold-rimmed spectacles, gave him an expression of gentleness and shyness that contrasted curiously with the strength of the square forehead and the powerfully-developed jaws.

He went to the window: it was fastened. Besides, how could any one have entered that way? The private balcony that ran round the flat broke off on the right and was separated on the left by a stone channel from the balconies in the Rue de Judée.

He went to his bedroom: it had no communication with the neighboring rooms. He went to his secretary’s bedroom: the door that led into the five rooms reserved for Mrs. Kesselbach was locked and bolted.

“I can’t understand it at all, Chapman. Time after time I have noticed things here . . . funny things, as you must admit. Yesterday, my walking-stick was moved. . . . The day before that, my papers had certainly been touched. . . . And yet how was it possible? . . .

“It is not possible, sir!” cried Chapman, whose honest, placid features displayed no anxiety. “You’re imagining things, that’s all. . . . You have no proof, nothing but impressions, to go upon. . . . Besides, look here: there is no way into this suite except through the entrance-lobby. Very well. You had a special key made on the day of our arrival: and your own man, Edwards, has the only duplicate. Do you trust him?”

Chapman gave a slight shrug of the shoulders. There was no doubt about it, the Lord of the Cape was becoming a trifle eccentric, with those incomprehensible fears of his. What risk can you run in an hotel, especially when you carry no valuables, no important sum of money on you or with you?

They heard the hall-door opening. It was Edwards. Mr. Kesselbach called him…