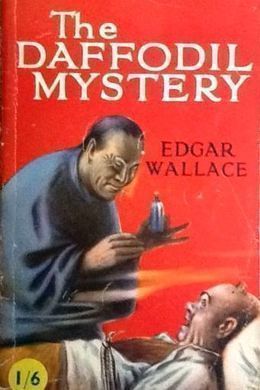 When Mr. Thomas Lyne, poet, poseur. and owner of Lyne’s Emporium insults a cashier, Odette Rider, she resigns. Having summoned detective Jack Tarling to investigate another employee, Mr. Milburgh, Lyne now changes his plans. Tarling and his Chinese companion refuse to become involved. They pay a visit to Odette’s flat. In the hall, Tarling meets Sam, convicted felon and protégé of Lyne. Next morning Tarling discovers a body. The hands are crossed on the breast, adorned with a handful of daffodils.

“I am afraid I don’t understand you, Mr. Lyne.”

Odette Rider looked gravely at the young man who lolled against his open desk. Her clear skin was tinted with the faintest pink, and there was in the sober depths of those grey eyes of hers a light which would have warned a man less satisfied with his own genius and power of persuasion than Thornton Lyne.

He was not looking at her face. His eyes were running approvingly over her perfect figure, noting the straightness of the back, the fine poise of the head, the shapeliness of the slender hands.

He pushed back his long black hair from his forehead and smiled. It pleased him to believe that his face was cast in an intellectual mould, and that the somewhat unhealthy pastiness of his skin might be described as the “pallor of thought.”

Presently he looked away from her through the big bay window which overlooked the crowded floor of Lyne’s Stores.

He had had this office built in the entresol and the big windows had been put in so that he might at any time overlook the most important department which it was his good fortune to control.

Now and again, as he saw, a head would be turned in his direction, and he knew that the attention of all the girls was concentrated upon the little scene, plainly visible from the floor below, in which an unwilling employee was engaged.

She, too, was conscious of the fact, and her discomfort and dismay increased. She made a little movement as if to go, but he stopped her.

“You don’t understand, Odette,” he said. His voice was soft and melodious, and held the hint of a caress. “Did you read my little book?” he asked suddenly.

“Yes, I read–some of it,” she said, and the colour deepened on her face.

“I suppose you thought it rather curious that a man in my position should bother his head to write poetry, eh?” he asked. “Most of it was written before I came into this beastly shop, my dear–before I developed into a tradesman!”

She made no reply, and he looked at her curiously.

“What did you think of them?” he asked.

Her lips were trembling, and again he mistook the symptoms.

“I thought they were perfectly horrible,” she said in a low voice. “Horrible!”

He raised his eyebrows.

“How very middle-class you are, Miss Rider!” he scoffed. “Those verses have been acclaimed by some of the best critics in the country as reproducing all the beauties of the old Hellenic poetry.”

She went to speak, but stopped herself and stood with lips compressed.

Thornton Lyne shrugged his shoulders and strode to the other end of his luxuriously equipped office.

“Poetry, like cucumbers, is an acquired taste,” he said after a while. “You have to be educated up to some kind of literature. I daresay there will come a time when you will be grateful that I have given you an opportunity of meeting beautiful thoughts dressed in beautiful language.”

She looked up at this.

“Not yet,” he replied coolly. “You said just now you didn’t understand what I was talking about. I’ll put it plainer this time. You’re a very beautiful girl, as you probably know, and you are destined, in all probability, to be the mate of a very average suburban-minded person, who will give you a life tantamount to slavery. That is the life of the middle-class woman, as you probably know. And why would you submit to this bondage? Simply because a person in a black coat and a white collar has mumbled certain passages over you–passages which have neither meaning nor, to an intelligent person, significance. I would not take the trouble of going through such a foolish ceremony, but I would take a great deal of trouble to make you happy.”

He walked towards her slowly and laid one hand upon her shoulder. Instinctively she shrank back and he laughed.

She swung round on him, her eyes blazing but her voice under control.

“I happen to be one of those foolish, suburban-minded people,” she said, “who give significance to those mumbled words you were speaking about. Yet I am broad-minded enough to believe that the marriage ceremony would not make you any happier or more unhappy whether it was performed or omitted. But, whether it were marriage or any other kind of union, I should at least require a man.”

He frowned at her.

“What do you mean?” he asked, and the soft quality of his voice underwent a change.

Her voice was full of angry tears when she answered him.

“I should not want an erratic creature who puts horrid sentiments into indifferent verse. I repeat, I should want a man.”

“Do you know whom you are talking to?” he asked, raising his voice.

“I am talking to Thornton Lyne,” said she, breathing quickly, “the proprietor of Lyne’s Stores, the employer of Odette Rider who draws three pounds every week from him.”

He was breathless with anger.