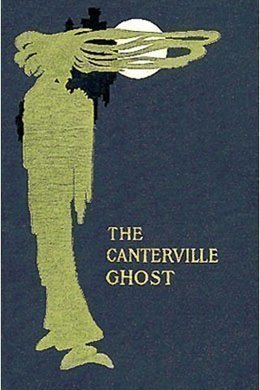 A terrifying ghost is haunting the ancient mansion of Canterville Chase, complete with creaking floorboards, clanking chains and gruesome disguises - but the new occupants seem strangely undisturbed by his presence. Deftly contrasting the conventional gothic ghost story with the pragmatism of the modern world, Wilde creates a gently comic fable of the conflict between old and new.

When Mr. Hiram B. Otis, the American Minister, bought Canterville Chase, every one told him he was doing a very foolish thing, as there was no doubt at all that the place was haunted. Indeed, Lord Canterville himself, who was a man of the most punctilious honour, had felt it his duty to mention the fact to Mr. Otis when they came to discuss terms.

“We have not cared to live in the place ourselves,” said Lord Canterville, “since my grandaunt, the Dowager Duchess of Bolton, was frightened into a fit, from which she never really recovered, by two skeleton hands being placed on her shoulders as she was dressing for dinner, and I feel bound to tell you, Mr. Otis, that the ghost has been seen by several living members of my family, as well as by the rector of the parish, the Rev. Augustus Dampier, who is a Fellow of King’s College, Cambridge. After the unfortunate accident to the Duchess, none of our younger servants would stay with us, and Lady Canterville often got very little sleep at night, in consequence of the mysterious noises that came from the corridor and the library.”

“My Lord,” answered the Minister, “I will take the furniture and the ghost at a valuation. I have come from a modern country, where we have everything that money can buy; and with all our spry young fellows painting the Old World red, and carrying off your best actors and prima-donnas, I reckon that if there were such a thing as a ghost in Europe, we’d have it at home in a very short time in one of our public museums, or on the road as a show.”

“I fear that the ghost exists,” said Lord Canterville, smiling, “though it may have resisted the overtures of your enterprising impresarios. It has been well known for three centuries, since 1584 in fact, and always makes its appearance before the death of any member of our family.”

“Well, so does the family doctor for that matter, Lord Canterville. But there is no such thing, sir, as a ghost, and I guess the laws of Nature are not going to be suspended for the British aristocracy.”

“You are certainly very natural in America,” answered Lord Canterville, who did not quite understand Mr. Otis’s last observation, “and if you don’t mind a ghost in the house, it is all right. Only you must remember I warned you.”

A few weeks after this, the purchase was concluded, and at the close of the season the Minister and his family went down to Canterville Chase. Mrs. Otis, who, as Miss Lucretia R. Tappan, of West 53d Street, had been a celebrated New York belle, was now a very handsome, middle-aged woman, with fine eyes, and a superb profile. Many American ladies on leaving their native land adopt an appearance of chronic ill-health, under the impression that it is a form of European refinement, but Mrs. Otis had never fallen into this error. She had a magnificent constitution, and a really wonderful amount of animal spirits. Indeed, in many respects, she was quite English, and was an excellent example of the fact that we have really everything in common with America nowadays, except, of course, language. Her eldest son, christened Washington by his parents in a moment of patriotism, which he never ceased to regret, was a fair-haired, rather good-looking young man, who had qualified himself for American diplomacy by leading the German at the Newport Casino for three successive seasons, and even in London was well known as an excellent dancer. Gardenias and the peerage were his only weaknesses. Otherwise he was extremely sensible. Miss Virginia E. Otis was a little girl of fifteen, lithe and lovely as a fawn, and with a fine freedom in her large blue eyes. She was a wonderful Amazon, and had once raced old Lord Bilton on her pony twice round the park, winning by a length and a half, just in front of the Achilles statue, to the huge delight of the young Duke of Cheshire, who proposed for her on the spot, and was sent back to Eton that very night by his guardians, in floods of tears. After Virginia came the twins, who were usually called “The Star and Stripes,” as they were always getting swished. They were delightful boys, and, with the exception of the worthy Minister, the only true republicans of the family.