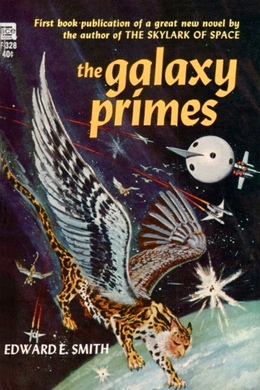 They were four of the greatest minds in the Universe: Two men and two women, all Psionic Primes, lost in an experimental spaceship billions of parsecs from home. And as they mentally charted the cosmos to find their way back to Earth, their own loves and hates were as startling as the worlds they encountered.

Her hair was a brilliant green. So was her spectacularly filled halter. So were her tight short-shorts, her lipstick, and the lacquer on her finger- and toe-nails. As she strolled into the Main of the starship, followed hesitantly by the other girl, she drove a mental probe at the black-haired, powerfully-built man seated at the instrument-banked console.

Then at the other, slenderer man who was rising to his feet from the pilot’s bucket seat. His guard was partially down; he was telepathing a pleasant if somewhat reserved greeting to both newcomers.

She turned to her companion and spoke aloud. “So these are the system’s best.” The emphasis was somewhere between condescension and sneer. “Not much to choose between, I’d say…’port me a tenth-piece, Clee? Heads, I take the tow-head.”

She flipped the coin dexterously. “Heads it is, Lola, so I get Jim–James James James the Ninth himself. You have the honor of pairing with Clee–or should I say His Learnedness Right the Honorable Director Doctor Cleander Simmsworth Garlock, Doctor of Philosophy, Doctor of Science, Prime Operator, President and First Fellow of the Galaxian Society, First Fellow of the Gunther Society, Fellow of the Institute of Paraphysics, of the Institute of Nuclear Physics, of the College of Mathematics, of the Congress of Psiontists, and of all the other top-bracket brain-gangs you ever heard of. Also, for your information, his men have given him a couple of informal degrees–P.D.Q. and S.O.B.”

The big psiontist’s expression of saturnine, almost contemptuous amusement had not changed; his voice came flat and cold. “The less you say, Doctor Bellamy, the better. Bitchy, swell-headed women give me an acute rectal pain. Pitching your curves over all the vizzies in space got you aboard, but it won’t get you a thing from here on. And for your information, Doctor Bellamy, one more crack like that and I take you over my knee and blister your backside.”

“Try it, you clumsy ape!” she jeered. “That I want to see–any time you want to get both arms broken at the elbows!”

“Now’s as good a time as any. I like your spirit, but I can’t say a thing for your judgment.” He got up and started purposefully toward her, but both noncombatants came between.

“Hold it, Clee!” James protested, both hands against the heavier man’s chest. “What the hell kind of show is that to put on?” And simultaneously:

“Belle! For godsake–picking a fight already, and with nobody knows how many million people looking on! You know as well as I do that we may have to spend the rest of our lives together, so act like civilized beings–please–both of you! And don’t…”

“Nobody’s watching this but us,” Garlock interrupted. “When pussy there started using her claws I cut the gun.”

“That’s what you think,” James said sharply, “but Fatso and his number one girl friend are coming in on the tight beam.”

“Oh?” Garlock whirled toward the hitherto dark and silent three-dimensional communications instrument. The face of a bossy-looking woman was already bright.

“Garlock! How dare you try to cut Chancellor Ferber off?” she demanded. Her voice was deep-pitched, blatant with authority. “Here you are, sir.”

The woman’s face shifted to one side and a man’s appeared–a face to justify in full his nickname.

“How much will this cost me, Fatso?” Garlock asked.

“Five thousand–and, since nobody can call me that deliberately, demotion three grades and probation for three years. Make a note, Miss Foster.”

“Still sure we aren’t going anywhere,” Garlock said. “What a brain!”

“Sure I’m sure!” Ferber gloated. “In a couple of hours I’m going to buy your precious starship in as junk. In the meantime, whether you like it or not, I’m going to watch your expression while you push all those pretty buttons and nothing happens.”

“The trouble with you, Fatso,” Garlock said dispassionately, as he opened a drawer and took out a pair of cutting pliers, “is that all your strength is in your glands and none in your brain. There are a lot of things–including a lot of tests–you know nothing about. How much will you see after I’ve cut one wire?”

“You wouldn’t dare!” the fat man shouted. “I’d fire you–blacklist you all over the sys–”

Voice and images died away and Garlock turned to the two women in the Main. He began to smile, but his mental shield did not weaken.

“You’ve got a point there, Lola,” he said, going on as though Ferber’s interruption had not occurred. “Not that I blame either Belle or myself. If anything was ever calculated to drive a man nuts, this farce was. As the only female Prime in the system, Belle should have been in automatically–she had no competition.