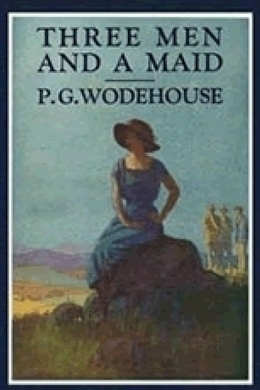 Three Men and a Maid

Through the curtained windows of the furnished apartment which Mrs. Horace Hignett had rented for her stay in New York rays of golden sunlight peeped in like the foremost spies of some advancing army. It was a fine summer morning. The hands of the Dutch clock in the hall pointed to thirteen minutes past nine; those of the ormolu clock in the sitting-room to eleven minutes past ten; those of the carriage clock on the bookshelf to fourteen minutes to six. In other words, it was exactly eight; and Mrs. Hignett acknowledged the fact by moving her head on the pillow, opening her eyes, and sitting up in bed. She always woke at eight precisely.

Was this Mrs. Hignett the Mrs. Hignett, the world-famous writer on Theosophy, the author of “The Spreading Light,” “What of the Morrow,” and all the rest of that well-known series? I’m glad you asked me. Yes, she was. She had come over to America on a lecturing tour.

The year 1921, it will be remembered, was a trying one for the inhabitants of the United States. Every boat that arrived from England brought a fresh swarm of British lecturers to the country. Novelists, poets, scientists, philosophers, and plain, ordinary bores; some herd instinct seemed to affect them all simultaneously. It was like one of those great race movements of the Middle Ages. Men and women of widely differing views on religion, art, politics, and almost every other subject; on this one point the intellectuals of Great Britain were single-minded, that there was easy money to be picked up on the lecture platforms of America and that they might just as well grab it as the next person.

Mrs. Hignett had come over with the first batch of immigrants; for, spiritual as her writings were, there was a solid streak of business sense in this woman and she meant to get hers while the getting was good. She was half way across the Atlantic with a complete itinerary booked before 90 per cent. of the poets and philosophers had finished sorting out their clean collars and getting their photographs taken for the passport.

She had not left England without a pang, for departure had involved sacrifices. More than anything else in the world she loved her charming home, Windles, in the county of Hampshire, for so many years the seat of the Hignett family. Windles was as the breath of life to her. Its shady walks, its silver lake, its noble elms, the old grey stone of its walls–these were bound up with her very being. She felt that she belonged to Windles, and Windles to her. Unfortunately, as a matter of cold, legal accuracy, it did not. She did but hold it in trust for her son, Eustace, until such time as he should marry and take possession of it himself. There were times when the thought of Eustace marrying and bringing a strange woman to Windles chilled Mrs. Hignett to her very marrow. Happily, her firm policy of keeping her son permanently under her eye at home and never permitting him to have speech with a female below the age of fifty had averted the peril up till now.

Eustace had accompanied his mother to America. It was his faint snores which she could hear in the adjoining room, as, having bathed and dressed, she went down the hall to where breakfast awaited her. She smiled tolerantly. She had never desired to convert her son to her own early rising habits, for, apart from not allowing him to call his soul his own, she was an indulgent mother. Eustace would get up at half-past nine, long after she had finished breakfast, read her mail, and started her duties for the day.

Breakfast was on the table in the sitting-room, a modest meal of rolls, cereal, and imitation coffee. Beside the pot containing this hell-brew was a little pile of letters. Mrs. Hignett opened them as she ate. The majority were from disciples and dealt with matters of purely theosophical interest. There was an invitation from the Butterfly Club asking her to be the guest of honour at their weekly dinner. There was a letter from her brother Mallaby–Sir Mallaby Marlowe, the eminent London lawyer–saying that his son Sam, of whom she had never approved, would be in New York shortly, passing through on his way back to England, and hoping that she would see something of him. Altogether a dull mail. Mrs. Hignett skimmed through it without interest, setting aside one or two of the letters for Eustace, who acted as her unpaid secretary, to answer later in the day.

She had just risen from the table when there was a sound of voices in the hall, and presently the domestic staff, a gaunt Irish lady of advanced years, entered the room.

“Ma’am, there was a gentleman.”

Mrs. Hignett was annoyed. Her mornings were sacred.

“Didn’t you tell him I was not to be disturbed?”

“I did not. I loosed him into the parlor.”

The staff remained for a moment in melancholy silence, then resumed. “He says he’s your nephew. His name’s Marlowe.”