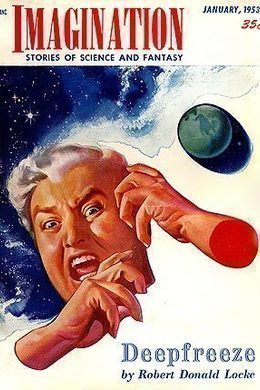 Imagine an advanced spacecraft powered by the human brain. That’s the remarkable technology at the heart of this fascinating short story by science fiction mastermind Philip K. Dick. A professor nearing the end of his natural lifespan donates his brain to the cutting-edge research effort – but will he ultimately follow along with the plan?

Kramer leaned back. “You can see the situation. How can we deal with a factor like this? The perfect variable.”

“Perfect? Prediction should still be possible. A living thing still acts from necessity, the same as inanimate material. But the cause-effect chain is more subtle; there are more factors to be considered. The difference is quantitative, I think. The reaction of the living organism parallels natural causation, but with greater complexity.”

Gross and Kramer looked up at the board plates, suspended on the wall, still dripping, the images hardening into place. Kramer traced a line with his pencil.

“See that? It’s a pseudopodium. They’re alive, and so far, a weapon we can’t beat. No mechanical system can compete with that, simple or intricate. We’ll have to scrap the Johnson Control and find something else.”

“Meanwhile the war continues as it is. Stalemate. Checkmate. They can’t get to us, and we can’t get through their living minefield.”

Kramer nodded. “It’s a perfect defense, for them. But there still might be one answer.”

“Wait a minute.” Kramer turned to his rocket expert, sitting with the charts and files. “The heavy cruiser that returned this week. It didn’t actually touch, did it? It came close but there was no contact.”

“Correct.” The expert nodded. “The mine was twenty miles off. The cruiser was in space-drive, moving directly toward Proxima, line-straight, using the Johnson Control, of course. It had deflected a quarter of an hour earlier for reasons unknown. Later it resumed its course. That was when they got it.”

“It shifted,” Kramer said. “But not enough. The mine was coming along after it, trailing it. It’s the same old story, but I wonder about the contact.”

“Here’s our theory,” the expert said. “We keep looking for contact, a trigger in the pseudopodium. But more likely we’re witnessing a psychological phenomena, a decision without any physical correlative. We’re watching for something that isn’t there. The mine decides to blow up. It sees our ship, approaches, and then decides.”

“Thanks.” Kramer turned to Gross. “Well, that confirms what I’m saying. How can a ship guided by automatic relays escape a mine that decides to explode? The whole theory of mine penetration is that you must avoid tripping the trigger. But here the trigger is a state of mind in a complicated, developed life-form.”

“The belt is fifty thousand miles deep,” Gross added. “It solves another problem for them, repair and maintenance. The damn things reproduce, fill up the spaces by spawning into them. I wonder what they feed on?”

“Probably the remains of our first-line. The big cruisers must be a delicacy. It’s a game of wits, between a living creature and a ship piloted by automatic relays. The ship always loses.” Kramer opened a folder. “I’ll tell you what I suggest.”

“Mine is very simple. These creatures are superior to any mechanical system, but only because they’re alive. Almost any other life-form could compete with them, any higher life-form. If the yuks can put out living mines to protect their planets, we ought to be able to harness some of our own life-forms in a similar way. Let’s make use of the same weapon ourselves.”

“Which life-form do you propose to use?”

“I think the human brain is the most agile of known living forms. Do you know of any better?”

“But no human being can withstand outspace travel. A human pilot would be dead of heart failure long before the ship got anywhere near Proxima.”

“But we don’t need the whole body,” Kramer said. “We need only the brain.”

“The problem is to find a person of high intelligence who would contribute, in the same manner that eyes and arms are volunteered.”

“Technically, it could be done. Brains have been transferred several times, when body destruction made it necessary. Of course, to a spaceship, to a heavy outspace cruiser, instead of an artificial body, that’s new.”

The room was silent.

“It’s quite an idea,” Gross said slowly. His heavy square face twisted. “But even supposing it might work, the big question is whose brain?”