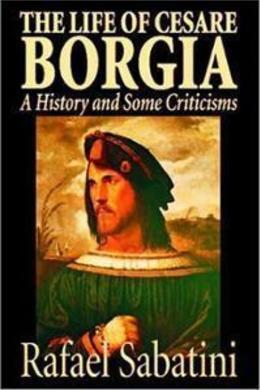 The Life of Cesare Borgia

A History and Some Criticisms

Though best known for sweeping historical epics such as Scaramouche and the Captain Blood series, Rafael Sabatini also dabbled in nonfiction from time to time, usually with wonderful results. This biography of Italian aristocrat and clergyman Cesare Borgia is packed with the kind of vivid descriptive detail that you don’t usually find in musty history books.

Although the House of Borgia, which gave to the Church of Rome two popes and at least one saint, is to be traced back to the eleventh century, claiming as it does to have its source in the Kings of Aragon, we shall take up its history for our purposes with the birth at the city of Xativa, in the kingdom of Valencia, on December 30, 1378, of Alonso de Borja, the son of Don Juan Domingo de Borja and his wife Doña Francisca.

To this Don Alonso de Borja is due the rise of his family to its stupendous eminence. An able, upright, vigorous-minded man, he became a Professor and Doctor of Jurisprudence at the University of Lerida, and afterwards served Alfonso I of Aragon, King of Naples and the Two Sicilies, in the capacity of secretary. This office he filled with the distinction that was to be expected from one so peculiarly fitted for it by the character of the studies he had pursued.

He was made Bishop of Valencia, created Cardinal in 1444, and finally–in 1455–ascended the throne of St. Peter as Calixtus III, an old man, enfeebled in body, but with his extraordinary vigour of mind all unimpaired.

Calixtus proved himself as much a nepotist as many another Pope before and since. This needs not to be dilated upon here; suffice it that in February of 1456 he gave the scarlet hat of Cardinal-Deacon of San Niccoló, in Carcere Tulliano, to his nephew Don Roderigo de Lanzol y Borja.

Born in 1431 at Xativa, the son of Juana de Borja (sister of Calixtus) and her husband Don Jofrè de Lanzol, Roderigo was in his twenty-fifth year at the time of his being raised to the purple, and in the following year he was further created Vice-Chancellor of Holy Church with an annual stipend of eight thousand florins. Like his uncle he had studied jurisprudence–at the University of Bologna–and mentally and physically he was extraordinarily endowed.

From the pen-portraits left of him by Gasparino of Verona, and Girolamo Porzio, we know him for a tall, handsome man with black eyes and full lips, elegant, courtly, joyous, and choicely eloquent, of such health and vigour and endurance that he was insensible to any fatigue. Giasone Maino of Milan refers to his “elegant appearance, serene brow, royal glance, a countenance that at once expresses generosity and majesty, and the genial and heroic air with which his whole personality is invested.” To a similar description of him Gasparino adds that “all women upon whom he so much as casts his eyes he moves to love him; attracting them as the lodestone attracts iron;” which is, it must be admitted, a most undesirable reputation in a churchman.

A modern historian who uses little restraint when writing of Roderigo Borgia says of him that “he was a man of neither much energy nor determined will,” and further that “the firmness and energy wanting to his character were, however, often replaced by the constancy of his evil passions, by which he was almost blinded.” How the constancy of evil passions can replace firmness and energy as factors of worldly success is not readily discernible, particularly if their possessor is blinded by them. The historical worth of the stricture may safely be left to be measured by its logical value. For the rest, to say that Roderigo Borgia was wanting in energy and in will is to say something to which his whole career gives the loud and derisive lie, as will–to some extent at least–be seen in the course of this work.

His honours as Cardinal-Deacon and Vice-Chancellor of the Holy See he owed to his uncle; but that he maintained and constantly improved his position–and he a foreigner, be it remembered–under the reigns of the four succeeding Popes–Pius II, Paul II, Sixtus IV, and Innocent VIII–until finally, six-and-twenty years after the death of Calixtus III, he ascended, himself, the Papal Throne, can be due only to the unconquerable energy and stupendous talents which have placed him where he stands in history–one of the greatest forces, for good or ill, that ever occupied St. Peter’s Chair.

Say of him that he was ambitious, worldly, greedy of power, and a prey to carnal lusts. All these he was. But for very sanity’s sake do not let it be said that he was wanting either in energy or in will, for he was energy and will incarnate.