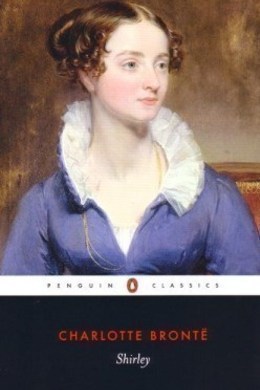 Robert Moore is a harsh mill-owner who pushes his workers so far that one of them tries to kill him. While dealing with the attempt on his life, Robert is also confronted with two very different women. One is Caroline Helstone, a shy girl virtually imprisoned in her uncle’s rectory and in love with Robert. The other is Shirley, a wealthy, outgoing woman who reject’s Robert’s self-seeking offer of marriage.

Of late years an abundant shower of curates has fallen upon the north of England: they lie very thick on the hills; every parish has one or more of them; they are young enough to be very active, and ought to be doing a great deal of good. But not of late years are we about to speak; we are going back to the beginning of this century: late years–present years are dusty, sunburnt, hot, arid; we will evade the noon, forget it in siesta, pass the midday in slumber, and dream of dawn.

If you think, from this prelude, that anything like a romance is preparing for you, reader, you never were more mistaken. Do you anticipate sentiment, and poetry, and reverie? Do you expect passion, and stimulus, and melodrama? Calm your expectations; reduce them to a lowly standard. Something real, cool, and solid lies before you; something unromantic as Monday morning, when all who have work wake with the consciousness that they must rise and betake themselves thereto. It is not positively affirmed that you shall not have a taste of the exciting, perhaps towards the middle and close of the meal, but it is resolved that the first dish set upon the table shall be one that a Catholic–ay, even an Anglo-Catholic–might eat on Good Friday in Passion Week: it shall be cold lentils and vinegar without oil; it shall be unleavened bread with bitter herbs, and no roast lamb.

Of late years, I say, an abundant shower of curates has fallen upon the north of England; but in eighteen-hundred-eleven-twelve that affluent rain had not descended. Curates were scarce then: there was no Pastoral Aid–no Additional Curates’ Society to stretch a helping hand to worn-out old rectors and incumbents, and give them the wherewithal to pay a vigorous young colleague from Oxford or Cambridge. The present successors of the apostles, disciples of Dr. Pusey and tools of the Propaganda, were at that time being hatched under cradle-blankets, or undergoing regeneration by nursery-baptism in wash-hand basins. You could not have guessed by looking at any one of them that the Italian-ironed double frills of its net-cap surrounded the brows of a preordained, specially-sanctified successor of St. Paul, St. Peter, or St. John; nor could you have foreseen in the folds of its long night-gown the white surplice in which it was hereafter cruelly to exercise the souls of its parishioners, and strangely to nonplus its old-fashioned vicar by flourishing aloft in a pulpit the shirt-like raiment which had never before waved higher than the reading-desk.

Yet even in those days of scarcity there were curates: the precious plant was rare, but it might be found. A certain favoured district in the West Riding of Yorkshire could boast three rods of Aaron blossoming within a circuit of twenty miles. You shall see them, reader. Step into this neat garden-house on the skirts of Whinbury, walk forward into the little parlour. There they are at dinner. Allow me to introduce them to you: Mr. Donne, curate of Whinbury; Mr. Malone, curate of Briarfield; Mr. Sweeting, curate of Nunnely. These are Mr. Donne’s lodgings, being the habitation of one John Gale, a small clothier. Mr. Donne has kindly invited his brethren to regale with him. You and I will join the party, see what is to be seen, and hear what is to be heard. At present, however, they are only eating; and while they eat we will talk aside.

These gentlemen are in the bloom of youth; they possess all the activity of that interesting age–an activity which their moping old vicars would fain turn into the channel of their pastoral duties, often expressing a wish to see it expended in a diligent superintendence of the schools, and in frequent visits to the sick of their respective parishes. But the youthful Levites feel this to be dull work; they prefer lavishing their energies on a course of proceeding which, though to other eyes it appear more heavy with ennui, more cursed with monotony, than the toil of the weaver at his loom, seems to yield them an unfailing supply of enjoyment and occupation.