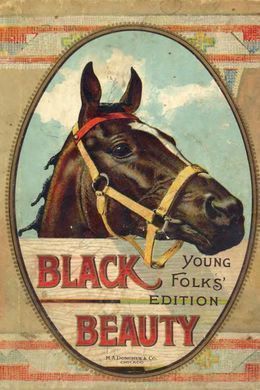 Black Beauty was written in 1877 and was subtitled “The Autobiography of a Horse.” It quickly became known as the best-loved animal story. In addition to this, the book achieved its aim to “induce kindness, sympathy and an understanding treatment of horses.” The story was used first by George Angell, founder of the Massachusetts Society for the Prevention of Cruelty to Animals, and then by the Royal Society for the Prevention of Cruelty to Animals. At a time when horses were relied upon for transport, the horse was the animal most likely to be abused. This book, by telling the story through the eyes of the animal, changed people’s attitudes.This abridged version comes with the original illustration on the front and with all the original illustrations in black and white throughout the book.

The first place that I can well remember was a pleasant meadow with a pond of clear water in it. Over the hedge on one side we looked into a plowed field, and on the other we looked over a gate at our master’s house, which stood by the roadside. While I was young I lived upon my mother’s milk, as I could not eat grass. In the daytime I ran by her side, and at night I lay down close by her. When it was hot we used to stand by the pond in the shade of the trees, and when it was cold we had a warm shed near the grove.

There were six young colts in the meadow beside me; they were older than I was. I used to run with them, and had great fun; we used to gallop all together round the field, as hard as we could go. Sometimes we had rather rough play, for they would bite and kick, as well as gallop.

One day, when there was a good deal of kicking, my mother whinnied to me to come to her, and then she said: “I wish you to pay attention to what I am going to say. The colts who live here are very good colts, but they are cart-horse colts, and they have not learned manners. You have been well-bred and well-born; your father has a great name in these parts, and your grandfather won the cup at the races; your grandmother had the sweetest temper of any horse I ever knew, and I think you have never seen me kick or bite. I hope you will grow up gentle and good, and never learn bad ways; do your work with a good will, lift your feet up well when you trot, and never bite or kick even in play.”

I have never forgotten my mother’s advice. I knew she was a wise old horse, and our master thought a great deal of her. Her name was Duchess, but he called her Pet.

Our master was a good, kind man. He gave us good food, good lodging and kind words; he spoke as kindly to us as he did to his little children. We were all fond of him, and my mother loved him very much. When she saw him at the gate she would neigh with joy, and trot up to him. He would pat and stroke her and say, “Well, old Pet, and how is your little Darkie?” I was a dull black, so he called me Darkie; then he would give me a piece of bread, which was very good, and sometimes he brought a carrot for my mother. All the horses would come to him, but I think we were his favorites. My mother always took him to town on a market-day in a light gig.

We had a ploughboy, Dick, who sometimes came into our field to pluck blackberries from the hedge. When he had eaten all he wanted he would have what he called fun with the colts, throwing stones and sticks at them to make them gallop. We did not much mind him, for we could gallop off; but sometimes a stone would hit and hurt us.

One day he was at this game, and did not know that the master was in the next field, watching what was going on; over the hedge he jumped in a snap, and catching Dick by the arm, he gave him such a box on the ear as made him roar with the pain and surprise. As soon as we saw the master we trotted up nearer to see what went on.

“Bad boy!” he said, “bad boy! to chase the colts. This is not the first time, but it shall be the last. There–take your money and go home; I shall not want you on my farm again.” So we never saw Dick any more. Old Daniel, the man who looked after the horses, was just as gentle as our master; so we were well off.