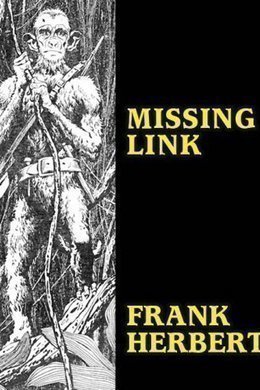 “Missing Link” is vintage Frank Herbert. It tells the story of Lewis Orne, junior I-A field man, on the planet Gienah III. He is there to investigate a missing ship, and the natives are nothing but trouble… Originally published in “Astounding Science Fiction” under the editorship of John W. Campbell, Jr. here is a tale from the Golden Age of Science Fiction!

“We ought to scrape this planet clean of every living thing on it,” muttered Umbo Stetson, section chief of Investigation & Adjustment.

Stetson paced the landing control bridge of his scout cruiser. His footsteps grated on a floor that was the rear wall of the bridge during flight. But now the ship rested on its tail fins—all four hundred glistening red and black meters of it. The open ports of the bridge looked out on the jungle roof of Gienah III some one hundred fifty meters below. A butter yellow sun hung above the horizon, perhaps an hour from setting.

“Clean as an egg!” he barked. He paused in his round of the bridge, glared out the starboard port, spat into the fire-blackened circle that the cruiser’s jets had burned from the jungle.

The I-A section chief was dark-haired, gangling, with large head and big features. He stood in his customary slouch, a stance not improved by sacklike patched blue fatigues. Although on this present operation he rated the flag of a division admiral, his fatigues carried no insignia. There was a general unkempt, straggling look about him.

Lewis Orne, junior I-A field man with a maiden diploma, stood at the opposite port, studying the jungle horizon. Now and then he glanced at the bridge control console, the chronometer above it, the big translite map of their position tilted from the opposite bulkhead. A heavy planet native, he felt vaguely uneasy on this Gienah III with its gravity of only seven-eighths Terran Standard. The surgical scars on his neck where the micro-communications equipment had been inserted itched maddeningly. He scratched.

A thin black insect with shell-like wings flew in Orne’s port, settled in his close-cropped red hair. Orne pulled the insect gently from his hair, released it. Again it tried to land in his hair. He ducked. It flew across the bridge, out the port beside Stetson.

There was a thick-muscled, no-fat look to Orne, but something about his blocky, off-center features suggested a clown.

“I’m getting tired of waiting,” he said.

A breeze rippled the tops of the green ocean below them. Here and there, red and purple flowers jutted from the verdure, bending and nodding like an attentive audience.

“Just look at that blasted jungle!” barked Stetson. “Them and their stupid orders!”

A call bell tinkled on the bridge control console. The red light above the speaker grid began blinking. Stetson shot an angry glance at it. “Yeah, Hal?”

“O.K., Stet. Orders just came through. We use Plan C. ComGO says to brief the field man, and jet out of here.”

“Did you ask them about using another field man?”

The speaker said: “Yes. They said we have to use Orne because of the records on the Delphinus.”

“Well then, will they give us more time to brief him?”

Instantly, Stetson was poised on the balls of his feet, alert. “Where?”

“About ten kilometers out. Section AAB-6.”

“A mob. You want I should count them?”

“Making a beeline for us. You better get a move on.”

Stetson looked across at his junior field man. “Orne, if you decide you want out of this assignment, you just say the word. I’ll back you to the hilt.”

“Why should I want out of my first field assignment?”

“Listen, and find out.” Stetson crossed to a tilt-locker behind the big translite map, hauled out a white coverall uniform with gold insignia, tossed it to Orne. “Get into these while I brief you on the map.”

“Get that uniform on your ugly frame!”

“Yes, sir, Admiral Stetson, sir. Right away, sir. But I thought I was through with old Rediscovery & Reeducation when you drafted me off of Hamal into the I-A … sir.” He began changing from the I-A blue to the R&R white. Almost as an afterthought, he said: “…Sir.”

A wolfish grin cracked Stetson’s big features. “I’m soooooo happy you have the proper attitude of subservience toward authority.”