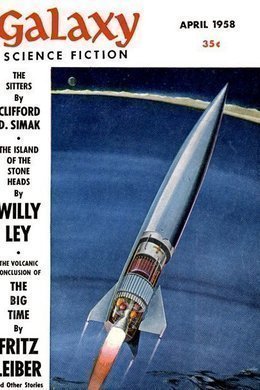 “Old Rambling House” is a short story by science fiction author Frank Herbert which first appeared in Galaxy magazine in 1958 and later in Herbert’s 1985 short story collection The Worlds of Frank Herbert. It is notable for its atmosphere and the dystopian multiverse in which no hope of freedom is left, which is atypical for Herbert’s works.

On his last night on Earth, Ted Graham stepped out of a glass-walled telephone booth, ducked to avoid a swooping moth that battered itself in a frenzy against a bare globe above the booth.

Ted Graham was a long-necked man with a head of pronounced egg shape topped by prematurely balding sandy hair. Something about his lanky, intense appearance suggested his occupation: certified public accountant.

He stopped behind his wife, who was studying a newspaper classified page, and frowned. “They said to wait here. They’ll come get us. Said the place is hard to find at night.”

Martha Graham looked up from the newspaper. She was a doll-faced woman, heavily pregnant, a kind of pink prettiness about her. The yellow glow from the light above the booth subdued the red-auburn cast of her ponytail hair.

“I just have to be in a house when the baby’s born,” she said. “What’d they sound like?”

“I dunno. There was a funny kind of interruption–like an argument in some foreign language.”

“Did they sound foreign?”

“In a way.” He motioned along the night-shrouded line of trailers toward one with two windows glowing amber. “Let’s wait inside. These bugs out here are fierce.”

“Did you tell them which trailer is ours?”

“Yes. They didn’t sound at all anxious to look at it. That’s odd–them wanting to trade their house for a trailer.”

“There’s nothing odd about it. They’ve probably just got itchy feet like we did.”

He appeared not to hear her. “Funniest-sounding language you ever heard when that argument started–like a squirt of noise.”

Inside the trailer, Ted Graham sat down on the green couch that opened into a double bed for company.

“They could use a good tax accountant around here,” he said. “When I first saw the place, I got that definite feeling. The valley looks prosperous. It’s a wonder nobody’s opened an office here before.”

His wife took a straight chair by the counter separating kitchen and living area, folded her hands across her heavy stomach.

“I’m just continental tired of wheels going around under me,” she said. “I want to sit and stare at the same view for the rest of my life. I don’t know how a trailer ever seemed glamorous when–”

“It was the inheritance gave us itchy feet,” he said.

Tires gritted on gravel outside.

Martha Graham straightened. “Could that be them?”

“Awful quick, if it is.” He went to the door, opened it, stared down at the man who was just raising a hand to knock.

“Yes.” He found himself staring at the caller.

“I’m Clint Rush. You called about the house?” The man moved farther into the light. At first, he’d appeared an old man, fine wrinkle lines in his face, a tired leather look to his skin. But as he moved his head in the light, the wrinkles seemed to dissolve–and with them, the years lifted from him.

“Yes, we called,” said Ted Graham. He stood aside. “Do you want to look at the trailer now?”

Martha Graham crossed to stand beside her husband. “We’ve kept it in awfully good shape,” she said. “We’ve never let anything get seriously wrong with it.”

She sounds too anxious, thought Ted Graham. I wish she’d let me do the talking for the two of us.

“We can come back and look at your trailer tomorrow in daylight,” said Rush. “My car’s right out here, if you’d like to see our house.”

Ted Graham hesitated. He felt a nagging worry tug at his mind, tried to fix his attention on what bothered him.

“Hadn’t we better take our car?” he asked. “We could follow you.”

“No need,” said Rush. “We’re coming back into town tonight anyway. We can drop you off then.”

Ted Graham nodded. “Be right with you as soon as I lock up.”

Inside the car, Rush mumbled introductions. His wife was a dark shadow in the front seat, her hair drawn back in a severe bun. Her features suggested gypsy blood. He called her Raimee.

Odd name, thought Ted Graham. And he noticed that she, too, gave that strange first impression of age that melted in a shift of light.