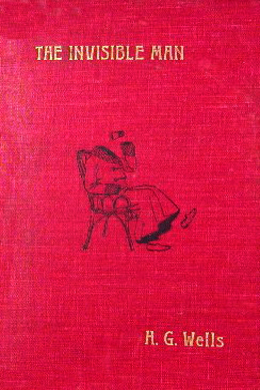 Spine-tingling and entertaining, The Invisible Man is a science fiction classic–and a penetrating, unflinching look into the heart of human nature. To its author, H. G. Wells, the novel was as compelling as “a good gripping dream.” But to generations of readers, the terrible and evil experiment of the demented scientist, Griffin, has conveyed a chilling nightmare of believable horror. An atmosphere of ever-increasing suspense begins with the arrival of a mysterious stranger at an English village inn and builds relentlessly to the stark terror of a victim pursued by a maniacal invisible man. The result is a masterwork: a dazzling display of the brilliant imagination, psychological insight, and literary craftsmanship that made H. G. Wells one of the most influential writers of his time.

The stranger came early in February, one wintry day, through a biting wind and a driving snow, the last snowfall of the year, over the down, walking from Bramblehurst railway station, and carrying a little black portmanteau in his thickly gloved hand. He was wrapped up from head to foot, and the brim of his soft felt hat hid every inch of his face but the shiny tip of his nose; the snow had piled itself against his shoulders and chest, and added a white crest to the burden he carried. He staggered into the “Coach and Horses” more dead than alive, and flung his portmanteau down. “A fire,” he cried, “in the name of human charity! A room and a fire!” He stamped and shook the snow from off himself in the bar, and followed Mrs. Hall into her guest parlour to strike his bargain. And with that much introduction, that and a couple of sovereigns flung upon the table, he took up his quarters in the inn.

Mrs. Hall lit the fire and left him there while she went to prepare him a meal with her own hands. A guest to stop at Iping in the wintertime was an unheard-of piece of luck, let alone a guest who was no “haggler,” and she was resolved to show herself worthy of her good fortune. As soon as the bacon was well under way, and Millie, her lymphatic maid, had been brisked up a bit by a few deftly chosen expressions of contempt, she carried the cloth, plates, and glasses into the parlour and began to lay them with the utmost eclat. Although the fire was burning up briskly, she was surprised to see that her visitor still wore his hat and coat, standing with his back to her and staring out of the window at the falling snow in the yard. His gloved hands were clasped behind him, and he seemed to be lost in thought. She noticed that the melting snow that still sprinkled his shoulders dripped upon her carpet. “Can I take your hat and coat, sir?” she said, “and give them a good dry in the kitchen?”

“No,” he said without turning.

She was not sure she had heard him, and was about to repeat her question.

He turned his head and looked at her over his shoulder. “I prefer to keep them on,” he said with emphasis, and she noticed that he wore big blue spectacles with sidelights, and had a bush side-whisker over his coat-collar that completely hid his cheeks and face.

He made no answer, and had turned his face away from her again, and Mrs. Hall, feeling that her conversational advances were ill-timed, laid the rest of the table things in a quick staccato and whisked out of the room. When she returned he was still standing there, like a man of stone, his back hunched, his collar turned up, his dripping hat-brim turned down, hiding his face and ears completely. She put down the eggs and bacon with considerable emphasis, and called rather than said to him, “Your lunch is served, sir.”

“Thank you,” he said at the same time, and did not stir until she was closing the door. Then he swung round and approached the table with a certain eager quickness.

As she went behind the bar to the kitchen she heard a sound repeated at regular intervals. Chirk, chirk, chirk, it went, the sound of a spoon being rapidly whisked round a basin. “That girl!” she said. “There! I clean forgot it. It’s her being so long!” And while she herself finished mixing the mustard, she gave Millie a few verbal stabs for her excessive slowness. She had cooked the ham and eggs, laid the table, and done everything, while Millie (help indeed!) had only succeeded in delaying the mustard. And him a new guest and wanting to stay! Then she filled the mustard pot, and, putting it with a certain stateliness upon a gold and black tea-tray, carried it into the parlour.

She rapped and entered promptly. As she did so her visitor moved quickly, so that she got but a glimpse of a white object disappearing behind the table. It would seem he was picking something from the floor. She rapped down the mustard pot on the table, and then she noticed the overcoat and hat had been taken off and put over a chair in front of the fire, and a pair of wet boots threatened rust to her steel fender. She went to these things resolutely. “I suppose I may have them to dry now,” she said in a voice that brooked no denial.

“Leave the hat,” said her visitor, in a muffled voice, and turning she saw he had raised his head and was sitting and looking at her.

For a moment she stood gaping at him, too surprised to speak.