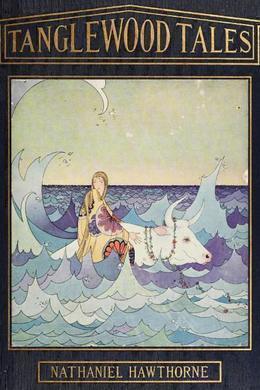 Hawthorne wrote these stories for children based on Greek myth and legend. They are incomparable retellings of themes which the Greek dramatists used in creating their immortal plays and literature. Contents: The Gorgon’s Head; The Golden Touch; The Paradise of Children; The Three Golden Apples; The Miraculous Pitcher; The Chimaera; The Wayside; The Minotaur; The Pygmies; The Dragon’s Teeth; Circe’s Palace; The Pomegranate Seeds; and The Golden Fleece.

In the old city of Troezene, at the foot of a lofty mountain, there lived, a very long time ago, a little boy named Theseus. His grandfather, King Pittheus, was the sovereign of that country, and was reckoned a very wise man; so that Theseus, being brought up in the royal palace, and being naturally a bright lad, could hardly fail of profiting by the old king’s instructions. His mother’s name was Aethra. As for his father, the boy had never seen him. But, from his earliest remembrance, Aethra used to go with little Theseus into a wood, and sit down upon a moss-grown rock, which was deeply sunken into the earth. Here she often talked with her son about his father, and said that he was called Aegeus, and that he was a great king, and ruled over Attica, and dwelt at Athens, which was as famous a city as any in the world. Theseus was very fond of hearing about King Aegeus, and often asked his good mother Aethra why he did not come and live with them at Troezene.

“Ah, my dear son,” answered Aethra, with a sigh, “a monarch has his people to take care of. The men and women over whom he rules are in the place of children to him; and he can seldom spare time to love his own children as other parents do. Your father will never be able to leave his kingdom for the sake of seeing his little boy.”

“Well, but, dear mother,” asked the boy, “why cannot I go to this famous city of Athens, and tell King Aegeus that I am his son?”

“That may happen by and by,” said Aethra. “Be patient, and we shall see. You are not yet big and strong enough to set out on such an errand.”

“And how soon shall I be strong enough?” Theseus persisted in inquiring.

“You are but a tiny boy as yet,” replied his mother. “See if you can lift this rock on which we are sitting?”

The little fellow had a great opinion of his own strength. So, grasping the rough protuberances of the rock, he tugged and toiled amain, and got himself quite out of breath, without being able to stir the heavy stone. It seemed to be rooted into the ground. No wonder he could not move it; for it would have taken all the force of a very strong man to lift it out of its earthy bed.

His mother stood looking on, with a sad kind of a smile on her lips and in her eyes, to see the zealous and yet puny efforts of her little boy. She could not help being sorrowful at finding him already so impatient to begin his adventures in the world.

“You see how it is, my dear Theseus,” said she. “You must possess far more strength than now before I can trust you to go to Athens, and tell King Aegeus that you are his son. But when you can lift this rock, and show me what is hidden beneath it, I promise you my permission to depart.”

Often and often, after this, did Theseus ask his mother whether it was yet time for him to go to Athens; and still his mother pointed to the rock, and told him that, for years to come, he could not be strong enough to move it. And again and again the rosy-checked and curly-headed boy would tug and strain at the huge mass of stone, striving, child as he was, to do what a giant could hardly have done without taking both of his great hands to the task. Meanwhile the rock seemed to be sinking farther and farther into the ground. The moss grew over it thicker and thicker, until at last it looked almost like a soft green seat, with only a few gray knobs of granite peeping out. The overhanging trees, also, shed their brown leaves upon It, as often as the autumn came; and at its base grew ferns and wild flowers, some of which crept quite over its surface. To all appearance, the rock was as firmly fastened as any other portion of the earth’s substance.

But, difficult as the matter looked, Theseus was now growing up to be such a vigorous youth, that, in his own opinion, the time would quickly come when he might hope to get the upper hand of this ponderous lump of stone.

“Mother, I do believe it has started!” cried he, after one of his attempts. “The earth around it is certainly a little cracked!”

“No, no, child!” his mother hastily answered. “It is not possible you can have moved it, such a boy as you still are!”

Nor would she be convinced, although Theseus showed her the place where he fancied that the stem of a flower had been partly uprooted by the movement of the rock. But Aethra sighed, and looked disquieted; for, no doubt, she began to be conscious that her son was no longer a child, and that, in a little while hence, she must send him forth among the perils and troubles of the world.

It was not more than a year afterwards when they were again sitting on the moss-covered stone. Aethra had once more told him the oft-repeated story of his father, and how gladly he would receive Theseus at his stately palace, and how he would present him to his courtiers and the people, and tell them that here was the heir of his dominions. The eyes of Theseus glowed with enthusiasm, and he would hardly sit still to hear his mother speak.