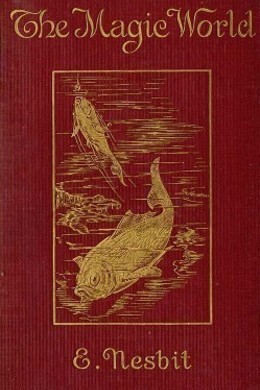 A thoughtless boy learns a lesson from his cat; a magic telescope brings two boys a fortune; a crow, a cat, a fish, all whisk away disgraced children to castles; sensible princes and princesses outwit curses and many more tales.

To have your hair cut is not painful, nor does it hurt to have your whiskers trimmed. But round wooden shoes, shaped like bowls, are not comfortable wear, however much it may amuse the onlooker to see you try to walk in them. If you have a nice fur coat like a company promoter’s, it is most annoying to be made to swim in it. And if you had a tail, surely it would be solely your own affair; that any one should tie a tin can to it would strike you as an unwarrantable impertinence–to say the least.

Yet it is difficult for an outsider to see these things from the point of view of both the persons concerned. To Maurice, scissors in hand, alive and earnest to snip, it seemed the most natural thing in the world to shorten the stiff whiskers of Lord Hugh Cecil by a generous inch. He did not understand how useful those whiskers were to Lord Hugh, both in sport and in the more serious business of getting a living. Also it amused Maurice to throw Lord Hugh into ponds, though Lord Hugh only once permitted this liberty. To put walnuts on Lord Hugh’s feet and then to watch him walk on ice was, in Maurice’s opinion, as good as a play. Lord Hugh was a very favourite cat, but Maurice was discreet, and Lord Hugh, except under violent suffering, was at that time anyhow, dumb.

But the empty sardine-tin attached to Lord Hugh’s tail and hind legs–this had a voice, and, rattling against stairs, banisters, and the legs of stricken furniture, it cried aloud for vengeance. Lord Hugh, suffering violently, added his voice, and this time the family heard. There was a chase, a chorus of ‘Poor pussy!’ and ‘Pussy, then!’ and the tail and the tin and Lord Hugh were caught under Jane’s bed. The tail and the tin acquiesced in their rescue. Lord Hugh did not. He fought, scratched, and bit. Jane carried the scars of that rescue for many a long week.

When all was calm Maurice was sought and, after some little natural delay, found–in the boot-cupboard.

‘Oh, Maurice!’ his mother almost sobbed, ‘how can you? What will your father say?’

Maurice thought he knew what his father would do.

‘I didn’t mean to be cruel,’ Maurice said. And, what is more, he spoke the truth. All the unwelcome attentions he had showered on Lord Hugh had not been exactly intended to hurt that stout veteran–only it was interesting to see what a cat would do if you threw it in the water, or cut its whiskers, or tied things to its tail.

‘Oh, but you must have meant to be cruel,’ said mother, ‘and you will have to be punished.’

‘I wish I hadn’t,’ said Maurice, from the heart.

‘So do I,’ said his mother, with a sigh; ‘but it isn’t the first time; you know you tied Lord Hugh up in a bag with the hedgehog only last Tuesday week. You’d better go to your room and think it over. I shall have to tell your father directly he comes home.’

Maurice went to his room and thought it over. And the more he thought the more he hated Lord Hugh. Why couldn’t the beastly cat have held his tongue and sat still? That, at the time would have been a disappointment, but now Maurice wished it had happened. He sat on the edge of his bed and savagely kicked the edge of the green Kidderminster carpet, and hated the cat.

He hadn’t meant to be cruel; he was sure he hadn’t; he wouldn’t have pinched the cat’s feet or squeezed its tail in the door, or pulled its whiskers, or poured hot water on it. He felt himself ill-used, and knew that he would feel still more so after the inevitable interview with his father.

But that interview did not take the immediately painful form expected by Maurice. His father did not say, ‘Now I will show you what it feels like to be hurt.’ Maurice had braced himself for that, and was looking beyond it to the calm of forgiveness which should follow the storm in which he should so unwillingly take part. No; his father was already calm and reasonable–with a dreadful calm, a terrifying reason.