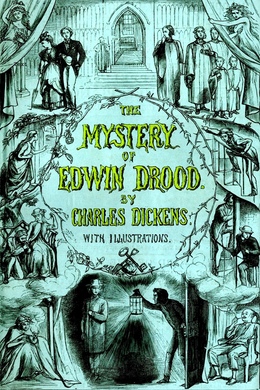 The biggest mystery of The Mystery of Edwin Drood is how it ends. It began as a serial, as nearly all of Dickens’ novels did, but only six instalments were published before the author’s death in 1870. What we know about Edwin Drood is this: he is betrothed to a young woman named Rosa Bud; they are fond of each other, but uncertain about their future together. Jasper John–Edwin’s older uncle and a frequenter of London’s opium dens–is infatuated with Rosa, as is Neville Landless, and the two begin to compete for her affection behind the scenes. Then, on Christmas Eve, Drood disappears, leaving behind only a pin and a pocket watch. What became of Edwin Drood that fateful night is one of the greatest unsolved mysteries in literature and it continues to intrigue readers, writers, and literary historians more than 100 years after Dickens’ death.

An ancient English Cathedral Tower? How can the ancient English Cathedral tower be here! The well-known massive gray square tower of its old Cathedral? How can that be here! There is no spike of rusty iron in the air, between the eye and it, from any point of the real prospect. What is the spike that intervenes, and who has set it up? Maybe it is set up by the Sultan’s orders for the impaling of a horde of Turkish robbers, one by one. It is so, for cymbals clash, and the Sultan goes by to his palace in long procession. Ten thousand scimitars flash in the sunlight, and thrice ten thousand dancing-girls strew flowers. Then, follow white elephants caparisoned in countless gorgeous colours, and infinite in number and attendants. Still the Cathedral Tower rises in the background, where it cannot be, and still no writhing figure is on the grim spike. Stay! Is the spike so low a thing as the rusty spike on the top of a post of an old bedstead that has tumbled all awry? Some vague period of drowsy laughter must be devoted to the consideration of this possibility.

Shaking from head to foot, the man whose scattered consciousness has thus fantastically pieced itself together, at length rises, supports his trembling frame upon his arms, and looks around. He is in the meanest and closest of small rooms. Through the ragged window-curtain, the light of early day steals in from a miserable court. He lies, dressed, across a large unseemly bed, upon a bedstead that has indeed given way under the weight upon it. Lying, also dressed and also across the bed, not longwise, are a Chinaman, a Lascar, and a haggard woman. The two first are in a sleep or stupor; the last is blowing at a kind of pipe, to kindle it. And as she blows, and shading it with her lean hand, concentrates its red spark of light, it serves in the dim morning as a lamp to show him what he sees of her.

‘Another?’ says this woman, in a querulous, rattling whisper. ‘Have another?’

He looks about him, with his hand to his forehead.

‘Ye’ve smoked as many as five since ye come in at midnight,’ the woman goes on, as she chronically complains. ‘Poor me, poor me, my head is so bad. Them two come in after ye. Ah, poor me, the business is slack, is slack! Few Chinamen about the Docks, and fewer Lascars, and no ships coming in, these say! Here’s another ready for ye, deary. Ye’ll remember like a good soul, won’t ye, that the market price is dreffle high just now? More nor three shillings and sixpence for a thimbleful! And ye’ll remember that nobody but me (and Jack Chinaman t’other side the court; but he can’t do it as well as me) has the true secret of mixing it? Ye’ll pay up accordingly, deary, won’t ye?’

She blows at the pipe as she speaks, and, occasionally bubbling at it, inhales much of its contents.

‘O me, O me, my lungs is weak, my lungs is bad! It’s nearly ready for ye, deary. Ah, poor me, poor me, my poor hand shakes like to drop off! I see ye coming-to, and I ses to my poor self, “I’ll have another ready for him, and he’ll bear in mind the market price of opium, and pay according.” O my poor head! I makes my pipes of old penny ink-bottles, ye see, deary—this is one—and I fits-in a mouthpiece, this way, and I takes my mixter out of this thimble with this little horn spoon; and so I fills, deary. Ah, my poor nerves! I got Heavens-hard drunk for sixteen year afore I took to this; but this don’t hurt me, not to speak of. And it takes away the hunger as well as wittles, deary.’

She hands him the nearly-emptied pipe, and sinks back, turning over on her face.

He rises unsteadily from the bed, lays the pipe upon the hearth-stone, draws back the ragged curtain, and looks with repugnance at his three companions. He notices that the woman has opium-smoked herself into a strange likeness of the Chinaman. His form of cheek, eye, and temple, and his colour, are repeated in her. Said Chinaman convulsively wrestles with one of his many Gods or Devils, perhaps, and snarls horribly. The Lascar laughs and dribbles at the mouth. The hostess is still.