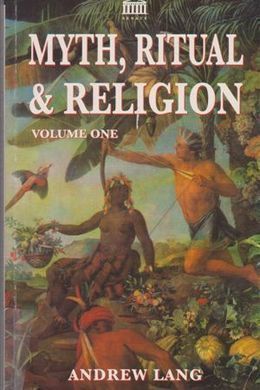 This early work of comparative mythology remains a vital resource to students and devotees of ethnography, history, and world legends. Lang’s stunningly comprehensive overview of pre-scientific thinking provide In this, the first of two volumes, Lang begins with a minimum definition of religion-“the belief in a primal being, a Maker”-explores the differences between mythology and religion, discusses the problems of seeking the origins of the belief.

Myth, Ritual and Religion - Volume 2 is also available from this two part series.

The word “Religion” may be, and has been, employed in many different senses, and with a perplexing width of significance. No attempt to define the word is likely to be quite satisfactory, but almost any definition may serve the purpose of an argument, if the writer who employs it states his meaning frankly and adheres to it steadily. An example of the confusions which may arise from the use of the term “religion” is familiar to students. Dr. J. D. Lang wrote concerning the native races of Australia: “They have nothing whatever of the character of religion, or of religious observances, to distinguish them from the beasts that perish”. Yet in the same book Dr. Lang published evidence assigning to the natives belief in “Turramullun, the chief of demons, who is the author of disease, mischief and wisdom”.(1) The belief in a superhuman author of “disease, mischief and wisdom” is certainly a religious belief not conspicuously held by “the beasts”; yet all religion was denied to the Australians by the very author who prints (in however erroneous a style) an account of part of their creed. This writer merely inherited the old missionary habit of speaking about the god of a non-Christian people as a “demon” or an “evil spirit”.

Dr. Lang’s negative opinion was contradicted in testimony published by himself, an appendix by the Rev. Mr. Ridley, containing evidence of the belief in Baiame. “Those who have learned that ‘God’ is the name by which we speak of the Creator, say that Baiame is God.”(1)

As “a minimum definition of religion,” Mr. Tylor has suggested “the belief in spiritual beings”. Against this it may be urged that, while we have no definite certainty that any race of men is destitute of belief in spiritual beings, yet certain moral and creative deities of low races do not seem to be envisaged as “spiritual” at all. They are regarded as EXISTENCES, as BEINGS, unconditioned by Time, Space, or Death, and nobody appears to have put the purely metaphysical question, “Are these beings spiritual or material?”(1) Now, if a race were discovered which believed in such beings, yet had no faith in spirits, that race could not be called irreligious, as it would have to be called in Mr. Tylor’s “minimum definition”. Almost certainly, no race in this stage of belief in nothing but unconditioned but not expressly spiritual beings is extant. Yet such a belief may conceivably have existed before men had developed the theory of spirits at all, and such a belief, in creative and moral unconditioned beings, not alleged to be spiritual, could not be excluded from a definition of religion.(2)

(2) “The history of the Jews, nay, the history of our own mind, proves to demonstration that the thought of God is a far easier thought, and a far earlier, than that of a spirit.” Father Tyrrell, S. J., The Month, October, 1898. As to the Jews, the question is debated. As to our own infancy, we are certainly taught about God before we are likely to be capable of the metaphysical notion of spirit. But we can scarcely reason from children in Christian houses to the infancy of the race.

For these reasons we propose (merely for the purpose of the present work) to define religion as the belief in a primal being, a Maker, undying, usually moral, without denying that the belief in spiritual beings, even if immoral, may be styled religious. Our definition is expressly framed for the purpose of the argument, because that argument endeavours to bring into view the essential conflict between religion and myth. We intend to show that this conflict between the religious and the mythical conception is present, not only (where it has been universally recognised) in the faiths of the ancient civilised peoples, as in Greece, Rome, India and Egypt, but also in the ideas of the lowest known savages.

It may, of course, be argued that the belief in Creator is itself a myth. However that may be, the attitude of awe, and of moral obedience, in face of such a supposed being, is religious in the sense of the Christian religion, whereas the fabrication of fanciful, humorous, and wildly irrational fables about that being, or others, is essentially mythical in the ordinary significance of that word, though not absent from popular Christianity.