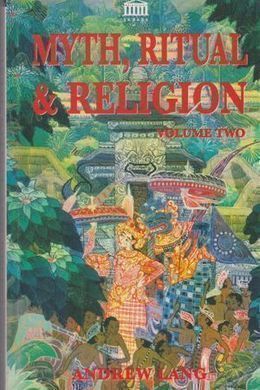 Lang’s stunningly comprehensive overview of pre-scientific thinking provides an important perspective on the worldviews that molded and continue to influence modern thought. In Volume Two, Lang explores the concept the “the divine” as it has manifested itself around the world, examines the importance of ritual, and delves particularly into the mythologies of ancient Egypt, Greece, Mexico, and India to demonstrate how imaginative ideas about gods have shaped humanity.

Myth, Ritual and Religion - Volume 1 is also available from this two part series.

The Science of Anthropology can speak, with some confidence, on many questions of Mythology. Materials are abundant and practically undisputed, because, as to their myths, savage races have spoken out with freedom. Myth represents, now the early scientific, now the early imaginative and humorous faculty, playing freely round all objects of thought: even round the Superhuman beings of belief. But, as to his Religion, the savage by no means speaks out so freely. Religion represents his serious mood of trust, dependence or apprehension.

In certain cases the ideas about superhuman Makers and judges are veiled in mysteries, rude sketches of the mysteries of Greece, to which the white man is but seldom admitted. In other cases the highest religious conceptions of the people are in a state of obsolescence, are subordinated to the cult of accessible minor deities, and are rarely mentioned. While sacrifice or service again is done to the lower objects of faith (ghosts or gods developed out of ghosts) the Supreme Being, in a surprising number of instances, is wholly unpropitiated. Having all things, he needs nothing (at all events gets nothing) at men’s hands except obedience to his laws; being good, he is not feared; or being obsolescent (superseded, as it seems, by deities who can be bribed) he has shrunk to the shadow of a name. Of the gods too good and great to need anything, the Ahone of the Red Men in Virginia, or the Dendid of the African Dinkas, is an example. Of the obsolescent god, now but a name, the Atahocan of the Hurons was, while the “Lord in heaven” of the Zulus is, an instance. Among the relatively supreme beings revealed only in the mysteries, the gods of many Australian tribes are deserving of observation.

For all these reasons, mystery, absence of sacrifice or idol, and obsolescence, the Religion of savages is a subject much more obscure than their mythology. The truth is that anthropological inquiry is not yet in a position to be dogmatic; has not yet knowledge sufficient for a theory of the Origins of Religion, and the evolution of belief from its lowest stages and earliest germs. Nevertheless such a theory has been framed, and has been already stated.

We formulated the objections to this current hypothesis, and observed that its defenders must take refuge in denying the evidence as to low savage religions, or, if the facts be accepted, must account for them by a theory of degradation, or by a theory of borrowing from Christian sources. That the Australians are not degenerate we demonstrated, and we must now give reasons for holding that their religious conceptions are not borrowed from Europeans.

The Australians, when observed by Dampier on the North-west Coast in 1688, seemed “the miserablest people in the world,” without houses, agriculture, metals, or domesticated animals.* In this condition they still remain, when not under European influence. Dampier, we saw, noted peculiarities: “Be it little or much they get, every one has his part, as well the young and tender as the old and feeble, who are not able to go abroad, as the strong and lusty”. This kind of justice or generosity, or unselfishness, is still inculcated in the religious mysteries of some of the race. Generosity is certainly one of the native’s leading features. He is always accustomed to give a share of his food, or of what he may possess, to his fellows. It may be, of course, objected to this that in doing so he is only following an old-established custom, the breaking of which would expose him to harsh treatment and to being looked on as a churlish fellow. It will, however, be hardly denied that, as this custom expresses the idea that, in this particular matter, every one is supposed to act in a kindly way towards certain individuals: the very existence of such a custom, even if it be only carried out in the hope of securing at some time a quid pro quo, shows that the native is alive to the fact that an action which benefits some one else is worthy to be performed….