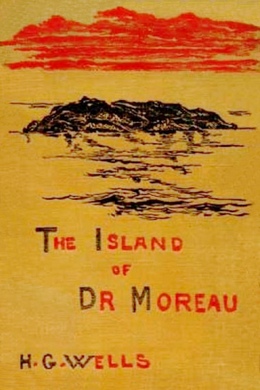 The Island of Dr. Moreau

A shipwreck in the South Seas, a palm-tree paradise where a mad doctor conducts vile experiments, animals that become human and then “beastly” in ways they never were before–it’s the stuff of high adventure. It’s also a parable about Darwinian theory, a social satire in the vein of Jonathan Swift (Gulliver’s Travels), and a bloody tale of horror. Or, as H. G. Wells himself wrote about this story, “The Island of Dr. Moreau is an exercise in youthful blasphemy. Now and then, though I rarely admit it, the universe projects itself towards me in a hideous grimace. It grimaced that time, and I did my best to express my vision of the aimless torture in creation.” This colorful tale by the author of The Time Machine, The Invisible Man, and The War of the Worlds lit a firestorm of controversy at the time of its publication in 1896.

I do not propose to add anything to what has already been written concerning the loss of the “Lady Vain.” As everyone knows, she collided with a derelict when ten days out from Callao. The longboat, with seven of the crew, was picked up eighteen days after by H. M. gunboat “Myrtle,” and the story of their terrible privations has become quite as well known as the far more horrible “Medusa” case. But I have to add to the published story of the “Lady Vain” another, possibly as horrible and far stranger. It has hitherto been supposed that the four men who were in the dingey perished, but this is incorrect. I have the best of evidence for this assertion: I was one of the four men.

But in the first place I must state that there never were four men in the dingey,–the number was three. Constans, who was “seen by the captain to jump into the gig,” luckily for us and unluckily for himself did not reach us. He came down out of the tangle of ropes under the stays of the smashed bowsprit, some small rope caught his heel as he let go, and he hung for a moment head downward, and then fell and struck a block or spar floating in the water. We pulled towards him, but he never came up.

I say luckily for us he did not reach us, and I might almost say luckily for himself; for we had only a small beaker of water and some soddened ship’s biscuits with us, so sudden had been the alarm, so unprepared the ship for any disaster. We thought the people on the launch would be better provisioned (though it seems they were not), and we tried to hail them. They could not have heard us, and the next morning when the drizzle cleared,–which was not until past midday,–we could see nothing of them. We could not stand up to look about us, because of the pitching of the boat. The two other men who had escaped so far with me were a man named Helmar, a passenger like myself, and a seaman whose name I don’t know,–a short sturdy man, with a stammer.

We drifted famishing, and, after our water had come to an end, tormented by an intolerable thirst, for eight days altogether. After the second day the sea subsided slowly to a glassy calm. It is quite impossible for the ordinary reader to imagine those eight days. He has not, luckily for himself, anything in his memory to imagine with. After the first day we said little to one another, and lay in our places in the boat and stared at the horizon, or watched, with eyes that grew larger and more haggard every day, the misery and weakness gaining upon our companions. The sun became pitiless. The water ended on the fourth day, and we were already thinking strange things and saying them with our eyes; but it was, I think, the sixth before Helmar gave voice to the thing we had all been thinking. I remember our voices were dry and thin, so that we bent towards one another and spared our words. I stood out against it with all my might, was rather for scuttling the boat and perishing together among the sharks that followed us; but when Helmar said that if his proposal was accepted we should have drink, the sailor came round to him.

I would not draw lots however, and in the night the sailor whispered to Helmar again and again, and I sat in the bows with my clasp-knife in my hand, though I doubt if I had the stuff in me to fight; and in the morning I agreed to Helmar’s proposal, and we handed halfpence to find the odd man. The lot fell upon the sailor; but he was the strongest of us and would not abide by it, and attacked Helmar with his hands. They grappled together and almost stood up. I crawled along the boat to them, intending to help Helmar by grasping the sailor’s leg; but the sailor stumbled with the swaying of the boat, and the two fell upon the gunwale and rolled overboard together. They sank like stones. I remember laughing at that, and wondering why I laughed. The laugh caught me suddenly like a thing from without.

I lay across one of the thwarts for I know not how long, thinking that if I had the strength I would drink sea-water and madden myself to die quickly. And even as I lay there I saw, with no more interest than if it had been a picture, a sail come up towards me over the sky-line. My mind must have been wandering, and yet I remember all that happened, quite distinctly. I remember how my head swayed with the seas, and the horizon with the sail above it danced up and down; but I also remember as distinctly that I had a persuasion that I was dead, and that I thought what a jest it was that they should come too late by such a little to catch me in my body.