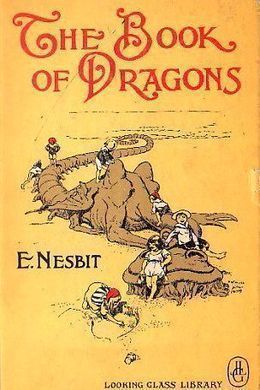 The Book of Dragons

In The Book of Dragons, E. Nesbit tells eight humorous and imaginative fairy tales about dragons set in modern England or fairy tale kingdoms, all with a modern perspective that both subverts and enjoys the genre. In addition to a variety of dragons, Nesbit writes engagingly about other creatures, from magical ones to non-magical ones. Wizards and witches, princes and princesses appear, too, as well as modern children, usually in brother and sister pairs.

He happened to be building a Palace when the news came, and he left all the bricks kicking about the floor for Nurse to clear up–but then the news was rather remarkable news. You see, there was a knock at the front door and voices talking downstairs, and Lionel thought it was the man come to see about the gas, which had not been allowed to be lighted since the day when Lionel made a swing by tying his skipping rope to the gas bracket.

And then, quite suddenly, Nurse came in and said, “Master Lionel, dear, they’ve come to fetch you to go and be King.”

Then she made haste to change his smock and to wash his face and hands and brush his hair, and all the time she was doing it Lionel kept wriggling and fidgeting and saying, “Oh, don’t, Nurse,” and, “I’m sure my ears are quite clean,” or, “Never mind my hair, it’s all right,” and, “That’ll do.”

“You’re going on as if you was going to be an eel instead of a King,” said Nurse.

The minute Nurse let go for a moment Lionel bolted off without waiting for his clean handkerchief, and in the drawing room there were two very grave-looking gentlemen in red robes with fur, and gold coronets with velvet sticking up out of the middle like the cream in the very expensive jam tarts.

“You will be crowned this afternoon,” said the grave gentleman who was not quite so grave-looking as the other.

“Your Nurse will be removed to the Palace later. No, never mind about changing your suit; the Royal robes will cover all that up.”

The grave gentlemen led the way to a coach with eight white horses, which was drawn up in front of the house where Lionel lived. It was No. 7, on the left-hand side of the street as you go up.

Lionel ran upstairs at the last minute, and he kissed Nurse and said: “Thank you for washing me. I wish I’d let you do the other ear. No–there’s no time now. Give me the hanky. Good-bye, Nurse.”

“Good-bye, ducky,” said Nurse. “Be a good little King now, and say ‘please’ and ‘thank you,’ and remember to pass the cake to the little girls, and don’t have more than two helps of anything.”

So off went Lionel to be made a King. He had never expected to be a King any more than you have, so it was all quite new to him–so new that he had never even thought of it. And as the coach went through the town he had to bite his tongue to be quite sure it was real, because if his tongue was real it showed he wasn’t dreaming. Half an hour before he had been building with bricks in the nursery; and now–the streets were all fluttering with flags; every window was crowded with people waving handkerchiefs and scattering flowers; there were scarlet soldiers everywhere along the pavements, and all the bells of all the churches were ringing like mad, and like a great song to the music of their ringing he heard thousands of people shouting, “Long live Lionel! Long live our little King!”

He was a little sorry at first that he had not put on his best clothes, but he soon forgot to think about that. If he had been a girl he would very likely have bothered about it the whole time.

As they went along, the grave gentlemen, who were the Chancellor and the Prime Minister, explained the things which Lionel did not understand.

“I thought we were a Republic,” said Lionel. “I’m sure there hasn’t been a King for some time.”

“But hadn’t my great-great-however-much-it-is-grandfather a crown?”

“Yes, but he sent it to be tinned over, for fear of vanity, and he had had all the jewels taken out, and sold them to buy books. He was a strange man; a very good King he was, but he had his faults–he was fond of books. Almost with his last breath he sent the crown to be tinned–and he never lived to pay the tinsmith’s bill.”

Here the Prime Minister wiped away a tear, and just then the carriage stopped and Lionel was taken out of the carriage to be crowned.