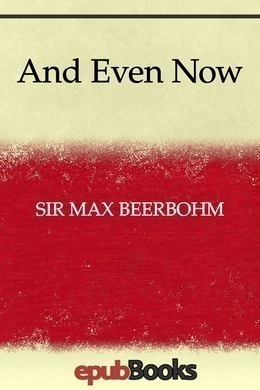 Max Beerbohm was a British caricaturist and parodist. As a young man he was considered quite the wit and spent much time in London society. By 35 he was middle aged and a bit dull. Beerbohm was drama critic for the Saturday Review and later did broadcast radio work. This collection of essays includes A Relic, How Shall I word It?, Mobled King, Kolniyatch, No 2 The Pines, A Letter That was not Written, Books within Books, The Golden Drugget, Hosts and Guests, A Point to be Remembered, Servants, Going Out for a Walk, Quia Inperfectum, Something Defeasible, A Clergyman, The Crime, In Home Unblest, William and Mary, On Speaking French, and Laughter.

Yesterday I found in a cupboard an old, small, battered portmanteau which, by the initials on it, I recognised as my own property. The lock appeared to have been forced. I dimly remembered having forced it myself, with a poker, in my hot youth, after some journey in which I had lost the key; and this act of violence was probably the reason why the trunk had so long ago ceased to travel. I unstrapped it, not without dust; it exhaled the faint scent of its long closure; it contained a tweed suit of Late Victorian pattern, some bills, some letters, a collar-stud, and–something which, after I had wondered for a moment or two what on earth it was, caused me suddenly to murmur, ‘Down below, the sea rustled to and fro over the shingle.’

Strange that these words had, year after long year, been existing in some obscure cell at the back of my brain!–forgotten but all the while existing, like the trunk in that cupboard. What released them, what threw open the cell door, was nothing but the fragment of a fan; just the butt-end of an inexpensive fan. The sticks are of white bone, clipped together with a semicircular ring that is not silver. They are neatly oval at the base, but variously jagged at the other end. The longest of them measures perhaps two inches. Ring and all, they have no market value; for a farthing is the least coin in our currency. And yet, though I had so long forgotten them, for me they are not worthless. They touch a chord…Lest this confession raise false hopes in the reader, I add that I did not know their owner.

I did once see her, and in Normandy, and by moonlight, and her name was Ange’lique. She was graceful, she was even beautiful. I was but nineteen years old. Yet even so I cannot say that she impressed me favourably. I was seated at a table of a cafe’ on the terrace of a casino. I sat facing the sea, with my back to the casino. I sat listening to the quiet sea, which I had crossed that morning. The hour was late, there were few people about. I heard the swing-door behind me flap open, and was aware of a sharp snapping and crackling sound as a lady in white passed quickly by me. I stared at her erect thin back and her agitated elbows. A short fat man passed in pursuit of her–an elderly man in a black alpaca jacket that billowed. I saw that she had left a trail of little white things on the asphalt. I watched the efforts of the agonised short fat man to overtake her as she swept wraith-like away to the distant end of the terrace. What was the matter? What had made her so spectacularly angry with him? The three or four waiters of the cafe’ were exchanging cynical smiles and shrugs, as waiters will. I tried to feel cynical, but was thrilled with excitement, with wonder and curiosity. The woman out yonder had doubled on her tracks. She had not slackened her furious speed, but the man waddlingly contrived to keep pace with her now. With every moment they became more distinct, and the prospect that they would presently pass by me, back into the casino, gave me that physical tension which one feels on a wayside platform at the imminent passing of an express. In the rushingly enlarged vision I had of them, the wrath on the woman’s face was even more saliently the main thing than I had supposed it would be. That very hard Parisian face must have been as white as the powder that coated it. ‘Coute, Ange’lique,’ gasped the perspiring bourgeois, ‘écoute, je te supplie–’ The swing-door received them and was left swinging to and fro. I wanted to follow, but had not paid for my bock. I beckoned my waiter. On his way to me he stooped down and picked up something which, with a smile and a shrug, he laid on my table: ‘Il semble que Mademoiselle ne s’en servira plus.’ This is the thing I now write of, and at sight of it I understood why there had been that snapping and crackling, and what the white fragments on the ground were.

I hurried through the rooms, hoping to see a continuation of that drama–a scene of appeasement, perhaps, or of fury still implacable. But the two oddly-assorted players were not performing there. My waiter had told me he had not seen either of them before. I suppose they had arrived that day. But I was not destined to see either of them again. They went away, I suppose, next morning; jointly or singly; singly, I imagine.